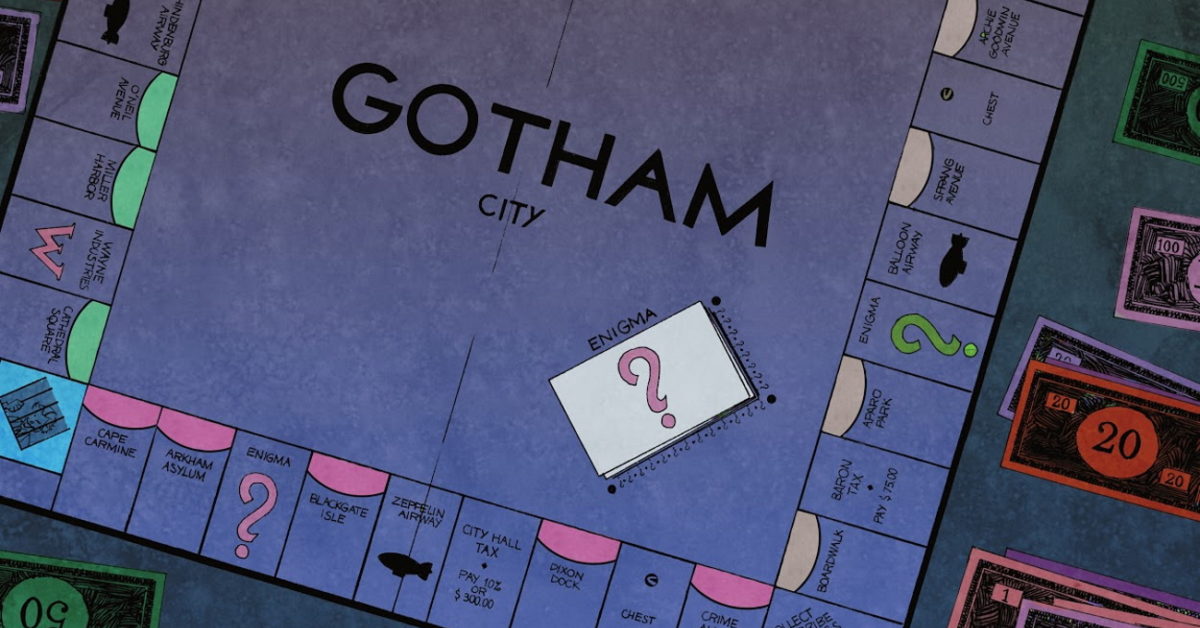 The Other History Of The DC Universe is a much-delayed retelling of the history of the DC Universe, from the point of view of characters from marginalised groups, who often don’t get the spotlight to give their version of events. Written by John Ridley, screenwriter of 12 Years A Slave, and writer of The Next Batman comic books, today’s volume sees Renee Montoya narrate the events in the past couple of decades in Gotham, through the nineties excess, the effect that 9/11 had on policing, and her own life dealing with her sexuality, her alcoholism, her self-destructive behaviour and the lives and choices of police around her, and the Batman family, to her eventual role becoming the vigilante The Question.

Written in prose, with illustrations from Giuseppe Camuncoli, Andrea Cucchi, and Jose Villarubia, The Other History Of The DC Universe is inventive rather than being merely descriptive or reflective of the words. Which, at one point, included a look at the Monopoly board for Gotham City. Chance becomes the Riddler’s Enigma, with locations from Arkham Asylum, Blackgate Isle, Crime Alley, and the Boardwalk, as well as all the locations name after Batman comic book creators, such as Dixon Dock, Archie Goodwin Avenue, and Miller Harbour. DC Comics and Hasbro did put out a version in 2005, but it is long out of print and the above version is a little more imaginative. Crime Alley is in the same place on both boards, however…

OTHER HISTORY OF THE DC UNIVERSE #4 (OF 5) CVR A GIUSEPPE CAMUNCOLI & MARCO MASTRAZZO (MR)
(W) John Ridley (A) Giuseppe Camuncoli, Andrea Cucchi (CA) Giuseppe Camuncoli, Marco Mastrazzo
Words can be tricky. Renee Montoya has known this for most of her life. Words taught her to feel ashamed of her gender, her sexuality, and her ethnicity. The people of Gotham City taught her to hide who she was to fit in to, be loved, and in doing so, they taught her to hate herself. But from that despair came something unexpected and powerful. Renee’s path from a closeted police officer in the 1990s to her time as the faceless vigilante known as the Question is one that is inextricably linked with queerness. It is one that is defiant of binaries, outmoded and hateful stereotypes, and the words that propagate them. As the Question, Renee stood in contrast to society’s rigid expectations of her, held a mirror up to the world’s face, and asked, “Who are you?” The long-awaited miniseries written by Academy Award-winning screenwriter John Ridley (12 Years a Slave, Let It Fall) and beautifully illustrated by Giuseppe Camuncoli and Andrea Cucchi continues to explore the mythology of the DC Universe, as seen through the prism of DC Super Heroes from historically disenfranchised groups. Retail: $6.99 In-Store Date: 5/25/2021