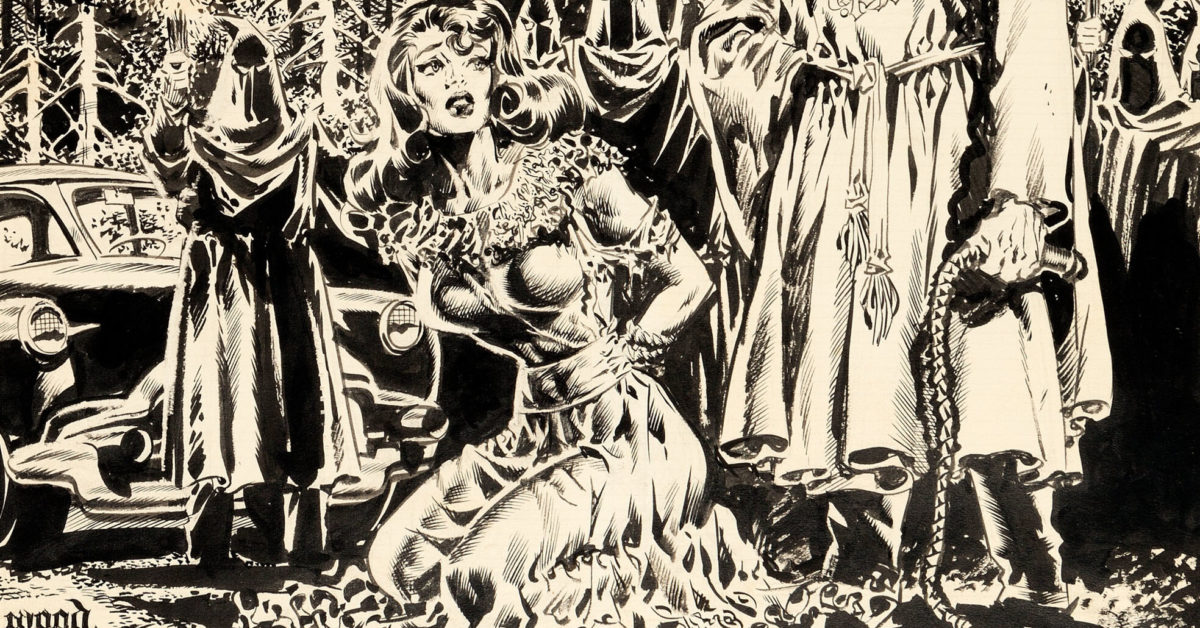 Among the most reproduced pieces of cover art in American comic book history, Wally Wood‘s potent work for the cover of EC Comics’ Shock SuspenStories #6 will go up for bid at Heritage Auctions’ June 17-19 Comics and Comic Art Signature Auction. The story behind this cover is a forceful condemnation of hate groups in America. As Steven Spielberg noted in the 2017 Shock SuspenStories collection containing this issue, “For the first time, Gaines attacked subjects like racial and religious prejudice” in the Shock Suspenstories title, and “confronted these controversial topics head on.”

The interior story behind this cover of Shock SuspenStories #6 is a tale titled Under Cover!, co-plotted by Bill Gaines and Al Feldstein, scripted by Feldstein, and drawn by Wood.  A caption blurb makes the intent of this story clear: “Safe behind their masks of prejudice, these hooded peddlers of racial, religious, and political hatred operate today. Mind you, they are shrewd and ruthless men such as those in our story. How long can we stay cool and indifferent to this threat to our democratic way of life? It is time to unveil these usurpers of our constitutionally guaranteed freedoms.”

The white supremacist group of the story, called the “Black Vigilante Society”, is typically compared to the Ku Klux Klan in analyses of this tale, but it may also be a more specific reference to a similar group from mid-20th century American history called the Black Legion.  A domestic white nationalist terrorist organization typically described as an even more extremist version of the KKK, the Black Legion rose to such infamy by the 1930s that they were the subject of a Humphrey Bogart film of the same name in 1937.  The group was again making newspaper headlines around the country during the early 1950s era when this story was created.  And as the above-quoted caption from the story implies, it was certainly not the only such group making headlines during this period.

A historically important cover by a master of the art form, Wally Wood’s cover for EC Comics’ Shock Suspenstories #6 will go up for bid at Heritage Auctions’ June 17-19 Comics and Comic Art Signature Auction.  The piece has a pre-auction estimate of $300,000 and up.

A Shock to the System: One of the Most Powerful and Important Covers in Comics History Heads to Heritage Auctions in June

Wally Wood’s original art for Shock SuspenStories No. 6, in which he took on the Klan, is one of the most reproduced in comic books history

DALLAS, Texas (May 24, 2021) – The cover of Shock SuspenStories No. 6 is among the most famous images in the history of comics.

Because of its subject matter. The terrifying story inside. And because of the man who made it. A perfect storm of creator and content: Wally Wood takes on the Ku Klux Klan!

And for the first time in four decades, this 1952 masterpiece heads to auction as one of the centerpieces of Heritage Auctions’ June 17-19 Comics and Comic Art Signature Auction. Its estimate is $300,000 and up.

It was produced by Wood at the most fertile period of his career, as he ascended from journeyman to legend, moving from comic-strip assistant to an illustrator of romance comics to a MAD man for Harvey Kurtzman to a creator of titles for Bill Gaines at EC in the 1950s. All the titles in which Wood had a hand left their mark, but Shock SuspenStories No. 6 hit hardest. As proof, the book itself is one of the most valuable and sought-after titles of the Golden Age, endlessly reproduced in hardback and soft-cover copies and cited whenever one needs proof comics were always about more than just strongmen in tights.

In 2017’s essential book The Life and Legend of Wallace Wood, Thommy Burns writes that this final issue of the comic’s first year is “frankly breathtaking” as it “depicts a sheer-nightied pin-up girl kneeling before a whip-wielding, robed man.” This wasn’t typical fare for EC, then specializing in sci-fi and horror. This was something brand-new. Something downright revolutionary.

Shock SuspenStories, after all, was where EC’s creators were allowed to tell stories that mattered – stories that “do a lot of good for the American public,” as one reader put it in the letters to the editor in that very issue. “Under Cover,” about the Black Vigilante Society’s murder of a young woman for “consorting with that trash element” and the do-gooding reporter who witnessed the killing, was one such tale – a not-so-thinly veiled condemnation of the Klan.

Wood’s exterior work for this comic was far more than just another pre-Code bondage cover. This was part of a much larger tale that asked the readers, by story’s end, “How long can we stay ‘cool’ and indifferent to this threat to our democratic way of life?” It was entertainment, yes, but also a potent statement by an artist ascending the mountaintop.

“EC was far ahead of their time in terms of addressing such real-world themes, to the point that their comics were widely influential and liberating for the first generation of 1960s underground cartoonists, as well as the subject of an incredible amount of scholarship over the last 50 years,” says Heritage Vice President and Comic Art Specialist Todd Hignite. “This amazing piece of history stands as one of EC’s most potent images by their very top artist.”

In coming years, of course, Wood would work for DC and Marvel, illustrating, most famously, Daredevil and Challengers of the Unknown. For Topps, too, he created the Ugly Stickers; in 1965, he co-created T.H.U.N.D.E.R. Agents for Tower Comics.

But the cover to Shock SuspenStories was among his first masterpieces. And the original art has been in the same collection for the last 40 years, ever since it was acquired in Russ Cochran’s original EC auctions by one of the most discerning EC collectors. Ever since it has been a hidden treasure, its existence, over time, almost mythological.

And now it comes to auction June 17 for the first time in decades and, just maybe, for the last time. Like the man says: frankly breathtaking.