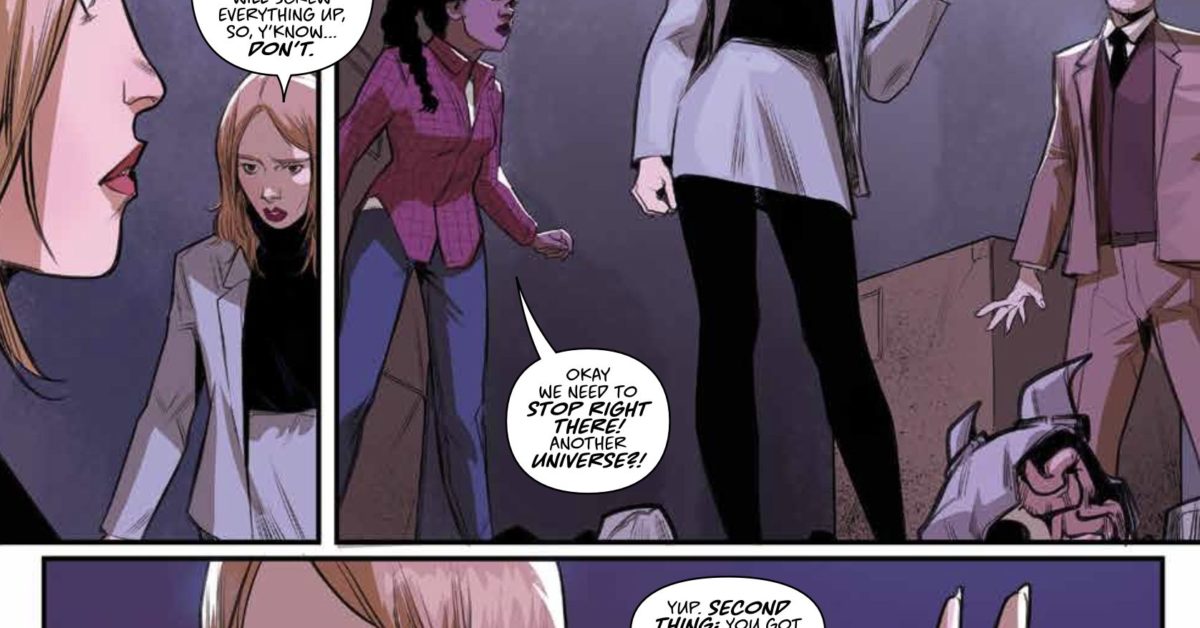 It seems that Xander Harris may soon not be the only member of the Buffy’s Scooby Gang who’s part of the vampire ranks. A couple of weeks ago, Boom Studios released Buffy The Vampire Slayer #25 which they claimed would “kick off the biggest Buffy story of the century.” Which begs us to ask the question – did it? Perhaps.

When Boom first snagged the Buffy The Vampire Slayer license from longtime publisher Dark Horse Comics. they caused waves by jettisoning Dark Horse’s continuation of the TV series, and rebooting the franchise from the beginning with what appeared to be an Ultimate Spider-Man reimagining for modern times. After dropping hints and easter eggs for the past two years, we finally get a clear look at Boom’s master plan for the franchise in issue #25.

And while the reboot did offer a fresh chance for new readers to jump on by resetting the comics to the simpler high school days, reintroducing characters in a modern context, and creating an opportunity to tell fresh stories inspired by beloved episodes and storylines – it now appears that in many ways Boom along with writers Jordie Bellaire and Jeremy Lambert have been telling may be the most fan-service Buffy story to date.

And as we suspected from the final page of issue #24, Buffy The Vampire Slayer #25 brought the Boom’s Buffy-verse in direct contact with the TV series Buffy-verse as Buffy, Willow, Kendra, Giles, Wesley, the ghost of Ethan Rayne, and Anya jumped from their universe into the TV universe and back from modern day to the 1990s when the show continuity takes place… specifically Season 3, E pisode 6 of the show.

And it appears the Boom version of Anya knows all about the Multiverse, how it works, and all of this appears to be part of her master plan to take down the Watchers Council. In fact, she lays out for the Scoobies that not only are there numerous alternate universes, but that crossing from one to another activates “Lurkers,” skeletal demon hounds from Hell that hunt down trespassers.

And in what may be the most fan service-y of moments, the issue reveals that the Boom’s Buffy-verse is “the world without shrimp,” a running gag from the show that first introduced the idea of a Multiverse in Season 4, Episode 17 “Superstar.”

Indeed it seems that, perhaps in homage to the X-Men comics that inspired elements of Buffy, the Boom Buffy-verse is less Ultimate Spider-Man and more Rick And Morty-meets–Spider-Verse. In this dark, more modern retelling of Buffy, the themes of toxic masculinity and the oppressive nature of the patriarchy are tackled more head-on. Characters like Xander, who died at the hands of Faith as a vampire; Willow, who lost half her soul and girlfriend; Buffy who has grappled with her failures and the “chosen one” myth given the speed with which Kendra and Faith have activated thanks to the Hellmouth; and others pay the price of a more cynical reality. Also, for collectors, it means that every first appearance in the Boom comic series is now a true first appearance of alternate universe versions of those characters along with new characters unique to the Boom Buffy-verse and yet canonically linked to the TV Buffy-verse – and the Dark Horse Comics continuations as well.

One indication of where things are going may come in the form of Buffy The Vampire Slayer: Tea Time #1, the upcoming Giles-focused one shot. The solicitation indicates the special, which releases after #25, features the beloved librarian Watcher as a vampire. We know this isn’t the case in the TV Buffy-verse, so is a major status quo change in the Boom Buffy-verse? Or some other reality? Or something else entirely?

One thing is safe to assume, this one-shot is a piece of the larger puzzle being built. Buffy The Vampire Slayer: Tea Time #1 FOCs today, May 24th.