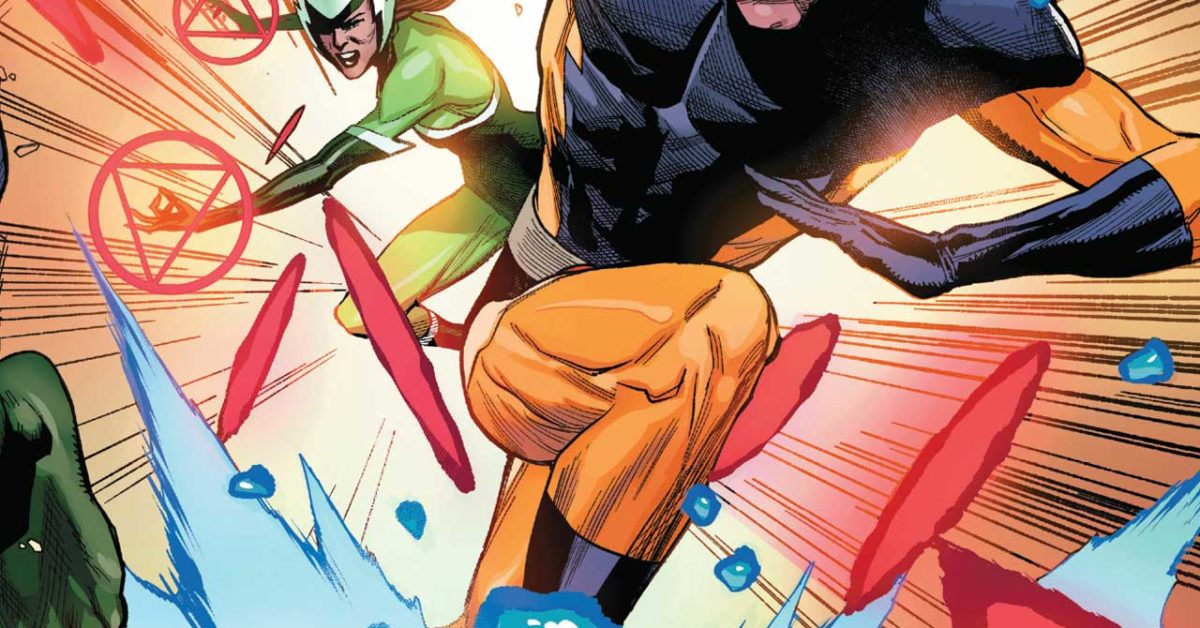 Much like the first two-thirds of the first Wonder Woman movie, there is an interesting story hiding behind the corporate needs of the crossover. Unlike that film, if you make your way through the weeds of copyright skirting remixes of things you know in Heroes Reborn #3, you’ll find that the interesting story in question lies cold, strangled by its limitations.

Stanley Stewart is “the fastest mortal alive,” a speedster with focus issues that makes Bart Allen look like Max Mercury. Writer Jason Aaron does a fantastic job at conveying what was once called “Pietro Maximoff Syndrome,” the difference in perception for someone whose mind moves at super-speed from the rest of us. Had he applied his skills to an issue of The Flash or even a book focused on Quicksilver, it might have been something.

Here, however, everything in the plot — from a throwaway aside from “The Silver Witch” (Wanda Maximoff, using both her power and her brother’s) to Blur’s own method for overcoming his own stumbles in this issue, to even the backup story — is focused on saying “everything here is wrong somehow,” a heavy-handed message that braces the reader for the eventual whiplash snap of this being washed away at the end of the event.

It should also be noted that the art presented by Federico Vicente, Matt Miller, and Cory Petit again would have made one heck of a spotlight in the series of any non-crossover bound speedster, as they really understand the applications and spatial issues with presenting rapid motion this way. The Achilles’ heel here remains the rug already being pulled out from the bottom of this narrative.

There’s a backup about Maya Lopez, the deaf heroine called Echo, who has photographic reflexes like Taskmaster, sitting in Arkham, er, Ravencroft with the Phoenix Force, choosing to keep it from exercising its power. It suffers from the same weak foundation as the main story but has at its credit the skilled hands of Ed McGuinness, Mark Morales, Matthew Wilson, and again Cory Petit to at least elevate it as far as its conceptions will allow.

To have assembled such a powerful group of talents and have them perform the equivalent of music from the Chuck E. Cheese catalog is its own kind of frustration, but that’s just where we are. RATING: MEH.

Heroes Reborn #3
By Jason Aaron, Federico Vicente, Ed McGuinness
Chaos magic at Mach 5! Blur, the swiftest mortal alive, must win a race through the mind-bending Dread Dimension in order to save his soul from the hypersonic hexes of the Speedster Supreme, the Silver Witch. Plus a back-up tale takes us inside the dark secrets of the Ravencroft Asylum and its newest inmate, the Phoenix.

Announcing the Cinematic Adventure Game Trek to Yomi
Call of Duty: Vanguard Reportedly Avoiding E3 in Favor of a Reveal Through Warzone Later This Summer
This Week on Xbox: June 11, 2021
Scarlet Nexus Trophy List Suggests Multiple Playthroughs and Lots of Gifts
UK May 2021 software and hardware charts: PS5 No.1, Xbox Series X|S No.2, Switch No.3