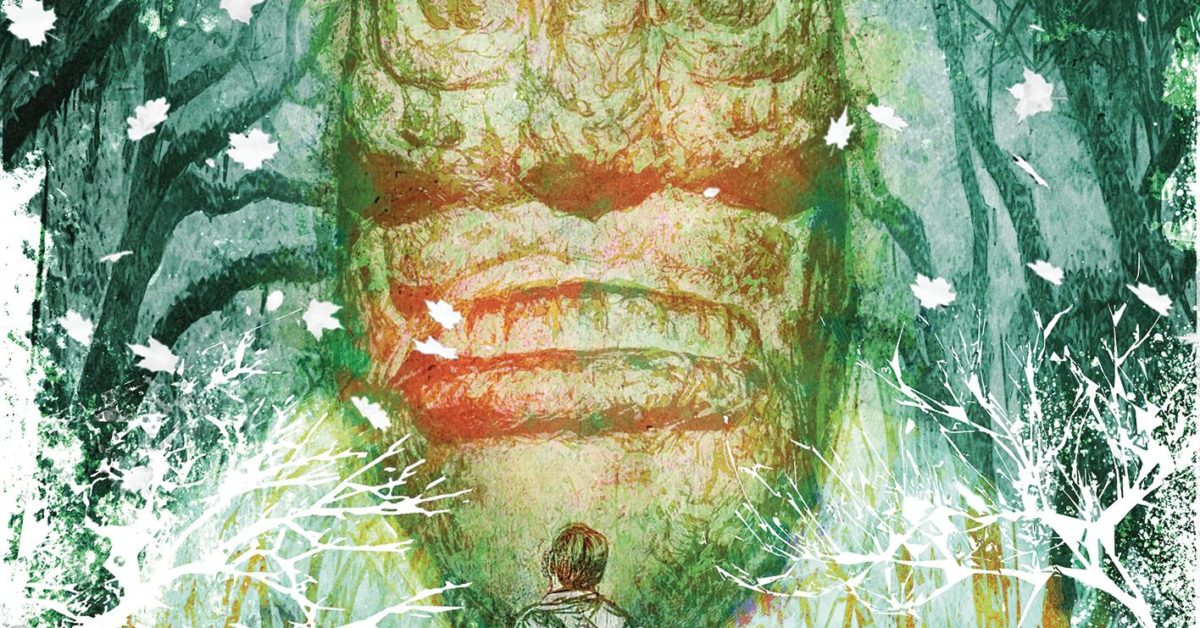 RAINBOW BRIDGE GN
AFTERSHOCK COMICS
JUN211194
(W) Steve Orlando, Steve Foxe (A / CA) Valentina Brancati
What if you got one last adventure with your best friend?

Andy and Rocket grew up together, with Rocket serving as Andy’s guardian through every one of childhood’s ups and downs. So, when Rocket passes away right before Andy’s 14th birthday, he’s rudderless. He can’t imagine making the transition to high school without Rocket at his side. The day before school starts, when Andy is at his lowest, he visits Rocket’s grave and unexpectedly summons the RAINBOW BRIDGE, a gateway to a fantasy world where pets discover their afterlife. But there’s a dark shadow to this paradise, and without Andy’s help, Rocket’s eternity may be grim…

The first graphic novel from AfterShock’s new YA imprint, Seismic Press, RAINBOW BRIDGE was con-ceived and written by Steve Orlando (PROJECT PATRON, KILL A MAN, Midnighter) and Steve Foxe (Adventure Time, Steven Universe, Grumpy Cat) with art by Valentina Brancati (Les Ravencroft, Ghost Writer).  Published in the category standard size of 6.5″ x 9.5″, this 120-page OGN will resonate with anyone who has ever had to say goodbye to a beloved pet – or who has greeted growing up with nervousness and anxiety.
In Shops: Aug 04, 2021
SRP: 16.99

CAMPISI #1 CVR A GALAN
AFTERSHOCK COMICS
JUN211195
JUN211196 – CAMPISI #1 CVR B 15 COPY INCV LOCATI – 4.99
(W) James Patrick (A) Marco Locati (CA) Fran Galan
Sonny Campisi is a small-time fixer for the mob-controlled neighborhood of Green Village. If you don’t pay your gambling debt, he’ll come and collect. If you get a little rough with one of “the girls,” he gets a little rough with you. But when a dragon flies into town and Sonny is the one who’s tasked with getting rid of it, it’s a problem unlike any he’s ever faced, and a chain of events begins that will affect everyone who lives in that neighborhood. Especially Sonny.

A new comic by James Patrick, the writer of KAIJU SCORE, and breakout artist Marco Locati, CAMPISI is a genre-mashing comedy-thriller that plays like one part Get Shorty, one-part Dragonslayer, and all parts absurdly wonderful!

When Aubrey has his first seizure, he’s pulled out of school and hidden away in the family’s remote country estate. His father – a high-ranking English priest – tries to chase the “devil” out of Aubrey – but maybe the devil lurks in the grotesque pagan effigy that dwells on the grounds. And maybe the devil will turn out to be Aubrey’s only ally…

A singular tale of nightmarish terror and creeping enlightenment told against a backdrop of ignorance and brutality, GOD OF TREMORS springs from the fertile imagination of award-winning writer Peter Milligam (OUT OF BODY, Shade the Changing Man, X-Force) with illustrations from Piotr Kowalski (JOIN THE FUTURE, Sex).
In Shops: Aug 18, 2021
SRP: 6.99

BEYOND THE BREACH #2
AFTERSHOCK COMICS
JUN211199
(W) Ed Brisson (A / CA) Damian Couceiro
The Breach has hit California. Thousands of interdimensional creatures now trapped in our world have begun to wreak havoc, leaving a trail of bodies up and down the coast. Vanessa is fighting to save those in her care when she encounters a strange man and his traveling com-panion. A man who may hold the secret to what the Breach is and how it can be stopped. But is he a friend or foe? Is he here to help her…or kill her?
In Shops: Aug 18, 2021
SRP: 3.99

CLANS OF BELARI #2
AFTERSHOCK COMICS
JUN211200
(W) Rob Blackie, Peter Blackie (A) Daniel Maine (CA) Andy Clarke
The Clan Chieftains rebuke Cluthian’s bid for Chieftain status, so he turns to amassing alien-tech weapons with which he may take what he wants by force. Te’a has gotten a taste for flying, and despite the class rules against her – she wants nothing more than to become a pilot. She convinces Gummy to pressure a mysterious underground operator to circumvent the rules, but in doing so, Gummy has made a deal with the devil (yes, Cluthian) that is certain to come back to haunt him and Te’a.
In Shops: Aug 11, 2021
SRP: 3.99

BUNNY MASK #3
AFTERSHOCK COMICS
JUN211201
(W) Paul Tobin (A / CA) Andrea Mutti
With armed intruders in his apartment and an eerie supernatural creature in his bed, Tyler Severin feels like his life couldn’t get much worse. Yet the mysterious Snitch has more revelations for Tyler, secrets about Bee Foster that lead back to caves where Bunny Mask was found, and a revelation that Tyler isn’t the only one who hears the Snitch’s voice.
In Shops: Aug 11, 2021
SRP: 4.99

OUT OF BODY #3
AFTERSHOCK COMICS
JUN211202
(W) Peter Miligan (A / CA) Inaki Miranda
With only one week to go before the hospital turns off his life support, psychologist Dan Collins’ astral projection turns detective to find out who tried to kill him – only to make a shocking discovery that changes everything.

Why does ex-colleague Milton Maine want to kill Dan? Why has sorcerer August Fryne captured the lost soul of one of Dan’s ex-patients? Difficult questions, impossible answers and psychedelic madness – all this and more in Out of Body Three!
In Shops: Aug 04, 2021
SRP: 3.99

They must all hold fast if they have any hope of braving pirate-infested waters, storming the literal Bastille and rescuing the Man in the Iron Mask, a mysterious prisoner who apparently plays a key role in Cardinal Richelieu’s grand plan.
In Shops: Aug 18, 2021
SRP: 3.99

SILVER CITY #4
AFTERSHOCK COMICS
JUN211204
(W) Olivia Cuartero-Briggs (A) Luca Merli (CA) Roberta Ingranata
Ru harnesses her power as an ancient to timedrop back to LAX, just moments before the explosion, to get Junie out of harm’s way. In doing so, however, she sees something she didn’t before. Something that will change the course of her existence and challenge everything she knows as truth.
In Shops: Aug 25, 2021
SRP: 3.99

GIRLS OF DIMENSION 13 #5
AFTERSHOCK COMICS
JUN211205
(W) Graham Nolan (A / CA) Bret Blevins
The dimensional war comes to a head as Abby and the girls face off against Abraxis and his army of demons, with 13 universes in the balance! Can the girls prevail against these odds? Perhaps with a little help from their friends…
In Shops: Aug 25, 2021
SRP: 3.99

PROJECT PATRON #5
AFTERSHOCK COMICS
JUN211206
(W) Steve Orlando (A) Patrick Piazzalunga (CA) David Talaski
The rebirth of the Patron might’ve been fake…but the return of his worst enemy is all too real!

Now, the Patron’s two greatest enemies have returned to ransom the Patron’s secret against extinction. Can the Project Patron team do what the Patron couldn’t? Can they defeat the monster called Woe and stop Matthew Mammon, a man who crossed time, space and death in the name of profit?
In Shops: Aug 25, 2021
SRP: 3.99

PHANTOM ON SCAN #5
AFTERSHOCK COMICS
JUN211207
(W) Cullen Bunn (A / CA) Mark Torres
In the heart of the Trellux Institute, an unearthly power is awakening.

As their numbers dwindle, as their psychic abilities threaten to kill them, as a vicious murderer stalks them from the shadows, a group of gifted individuals discovers the terrifying truth about their powers.
In Shops: Aug 25, 2021
SRP: 3.99

MILES TO GO TP (MR)
AFTERSHOCK COMICS
JUN211208
(W) B. Clay Moore (A / CA) Stephen Molnar
Amara Bishop is a newly single mother with a long-buried past. Raised by an
alcoholic father in a rundown trailer, Amara was a child when she learned to kill. And she hasn’t killed anyone since she was thirteen. When her aging mentor is murdered, and her daughter is threatened, that will soon change…

An unlikely assassin in a deadly game of cat and mouse, brought to you by B. Clay Moore (Hawaiian Dick, Battle Hymn) and Stephan Molnar (Imaginary Fiends, Star Trek). This volume contains the entire series, issues #1-5.
In Shops: Aug 18, 2021
SRP: 16.99

KNOCK EM DEAD TP
AFTERSHOCK COMICS
JUN211209
(W) Eliot Rahal (A) Mattia Monaco (CA) Andy Clarke
Sometimes you kill. Sometimes you get killed. But no matter what, everyone dies the first time they go on stage.

Pryor Brice has always wanted to be funny. And now, he’s taken the plunge and started doing stand-up comedy. Unfortunately, his older sister – Ronan – wants her brother to stop daydreaming and focus on his future.

Pryor is determined to succeed…the only problem is: He totally sucks at stand-up. That is…until an accident changes everything, leading both Pryor and Ronan to discover comedy isn’t all it’s cracked up to be.