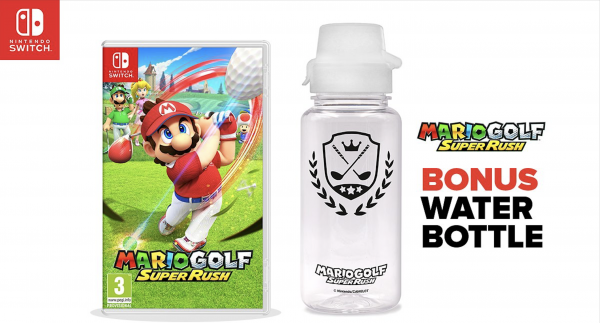 A new Mario Golf game swings onto the Nintendo Switch on June 25 and we can’t wait. We’ve gathered a list of all the best places to pre-order Mario Golf: Super Rush in the UK and US, along with the pre-order bonuses you can expect, so you can get the best deals at launch.

As for what you can expect from Super Rush, this is more than just your typical golf game with your favourite characters thrown in. Like any spin-off series in the Mario universe, there’s a massive selection of game modes, including the recently announced Battle Golf, a battle-royale spin on speed golf where players rush to capture three holes with the lowest stroke counts.

On top of that, you can expect signature moves from all of the characters, more manic multiplayer modes, and even levelling up features in the single-player adventure mode. Honestly, even if you’re not the type of person to pick up a golf game, Super Rush is well worth checking out.

Here’s where you can pre-order Mario Golf: Super Rush in the UK and US.

In addition to grabbing Mario Golf: Super Rush at the best prices if you pre-order early, there are also a couple of bonuses up for grabs.

In the UK, select retailers such as GAME and SimplyGames are including a free Mario Golf water bottle with all pre-orders of the game. It’s not 100 percent clear if all UK retailers are including this with their pre-orders, so if you don’t wanna miss out on it, make sure you get your pre-order from a retailer that’s specifically mentioned it’s included in their item description.

Over in the US, Best Buy is including a fancy branded bag tag that can be used to accessorise real golf bags with all pre-orders of the game. Whether or not you’d want to rock up at a golf course with one if you’re a serious golfer is your call. GameStop has an exclusive pre-order bonus too in the form of a Mario and Peach pin set, complete in their golf attire, of course.

If any additional Mario Golf: Super Rush pre-order bonuses get announced, we’ll be sure to add them here. We’ll also share any new deals on prices ahead of Mario Golf: Super Rush’s release on June 25, and you can keep up to date with all of the latest gaming deals and discounts by following Jelly Deals on Twitter.