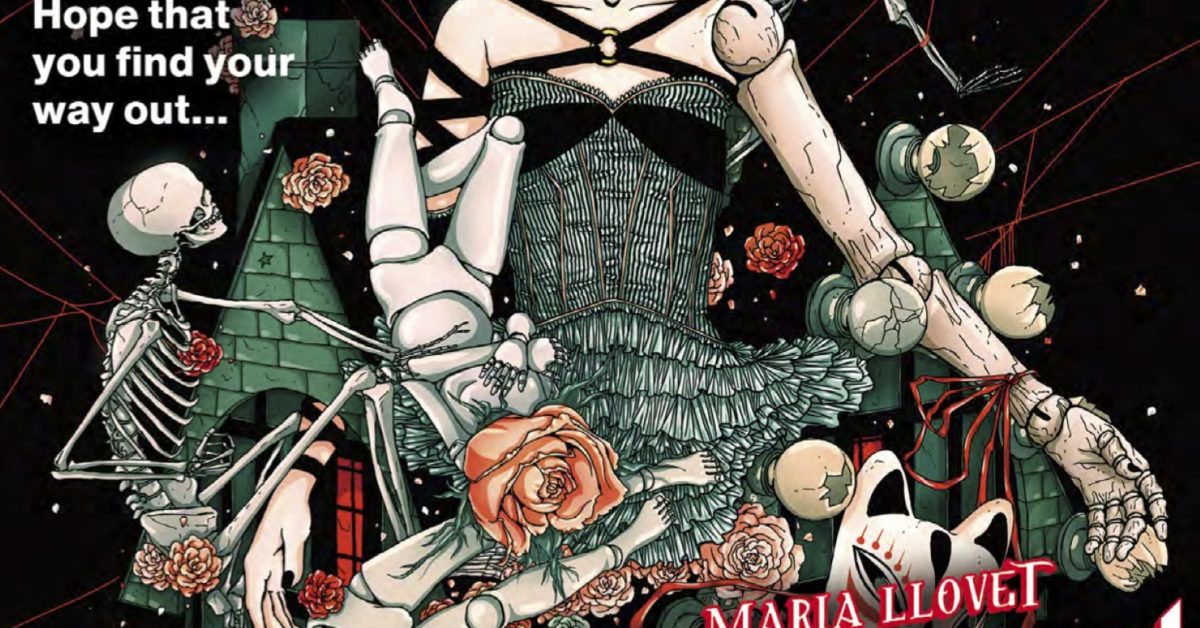 Maria Llovet’s Porcelain launching from Ablaze on the 4th of August will be on the front cover of the June edition of Diamond Comic Distributors’ Previews monthly catalogue. This is a first for Ablaze.

Additionally, Maria Llovet’s Eros/Psyche HC, collecting the acclaimed 5 issue series from ABLAZE, is offered for an on-sale date of September 29th. A Man’s Skin is another special ABLAZE advance solicitation for August that will debuts on October 29th as a beautiful hardcover edition of the award-winning graphic novel fairytale.

Beryl’s life in the desert is relatively simple, living with her aunt and her cat, …until the day she finds and enters the Dollhouse.

Stuck inside an ever-changing mystery house that hunts children and turns them into dolls, Beryl goes on a psychedelic journey where she must face the notion of her own limitations and move past them…before she becomes the building’s newest prey. Porcelain is a psychological thriller, depicted in a way that only acclaimed creator Maria Llovet (Faithless, Heartbeat, Loud, Eros/Psyche) can tell it. Catch the series debut with 5 special variant covers by acclaimed artists such as Sabine Rich, Caspar Wijngaard, Yishan Li, and Tyler Boss.

The Rose female boarding school is paradise for young girls…but only if you follow the rules. Because, if you disobey them, you can end up expelled, or even worse, dead. Sara and Silje are two students learning the rules of the school, which includes classes by day…and the casting of curses and spells by night. A love develops between the two, which is tender, but threatens to break under the weight of the dark secret society within The Rose.

An award-winning fairy tale about love set in Renaissance Italy. Bianca is a young lady from a good family and is of marriage age. Her parents find her a fiancéì to their liking: Giovanni, a rich merchant, young and pleasant. The wedding looks set to go smoothly even though Bianca cannot hide her disappointment at having to marry a man she knows nothing about.

But before the marriage, she learns the secret held and bequeathed by the women of her family for generations: a “man’s skin.” By donning it, Bianca becomes “Lorenzo” and enjoys all the attributes of a young man of stunning beauty. She can now visit the world of men incognito and get to know her fiancéì in his natural environment. In her male skin, Bianca frees herself from the limits imposed on women. The morals of the Renaissance then act as a mirror to our present time and poses several questions: why should women be treated differently from men? Why should their freedom be the object of contempt and coercion?

Tackling universal themes through a captivating and subtle fairy tale, French writer Hubert and artist Zanzim brilliantly question our relationship to gender and sexuality…but not only that. By mixing morality and humor, A Man’s Skin invites us to the mad and noble quest for love.

This international bestselling title has been highly awarded:

Announcing the Cinematic Adventure Game Trek to Yomi
Zoop, a new crowdfunding platform, launches
Exclusive: Betway and G2 Esports team up in ‘next level’ partnership
Rune Factory 5 has been delayed to early 2022 here in the west
Magneto Is Trending Thanks To Anti-Vaxxers’ False Claims