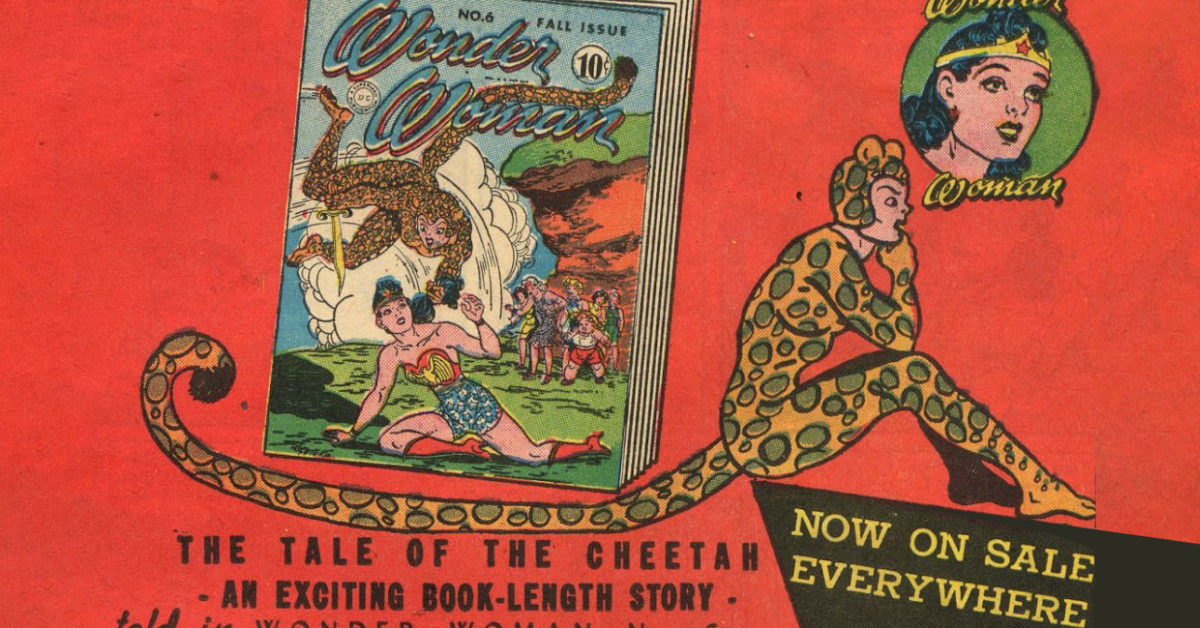 “The Green-Eyed goddess is a dangerous mistress,” wrote Wonder Woman co-creator William Moulton Marston in a 1937 syndicated newspaper piece about jealousy. “The Green-Eyed Goddess whispers that the other fellow won on a foul. If you listen, she will weave a convincing tale of malice and intrigue — for jealousy is an alluring jade. But if you remember in time that the Green-Eyed one is a vampire, feeding only on her followers, you will brush the emotional mists from your eyes…” Marston created a personification of the power and allure of jealousy again in Wonder Woman #6 with the debut of Cheetah.  There’s a Wonder Woman #6 CGC GD- 1.8 Off-white to white pages featuring the debut of Cheetah available in this week’s 2021 May 16-17 Sunday & Monday Comics, Animation & Art Weekly Online Auction #122120 from Heritage Auctions.

A narrative caption on the title splash of Wonder Woman #6 makes the reasoning behind the power and intent of Cheetah very plain:

There is nothing so dangerous in the world as the vicious hatred of a personal enemy, and there is no enemy so eager to inflict pain as a man or woman who feels himself your inferior.

Wonder Woman unknowingly rouses the insatiable hatred of such a foe — the Cheetah! Relentlessly this svelte siren, changing like Jekyll and Hyde from aristocratic beauty to modern Medusa, pursues the lovely Amazon maiden.

There are 82 listings for this issue on the CGC Census as of this writing. One of the great villain keys of the DC Comics Golden Age, there’s a Wonder Woman #6 CGC GD- 1.8 Off-white to white pages featuring the debut of Cheetah available in this week’s 2021 May 16-17 Sunday & Monday Comics, Animation & Art Weekly Online Auction #122120 from Heritage Auctions.

View the certification for CGC Certification ID 3727487006 and purchase grader’s notes if available.