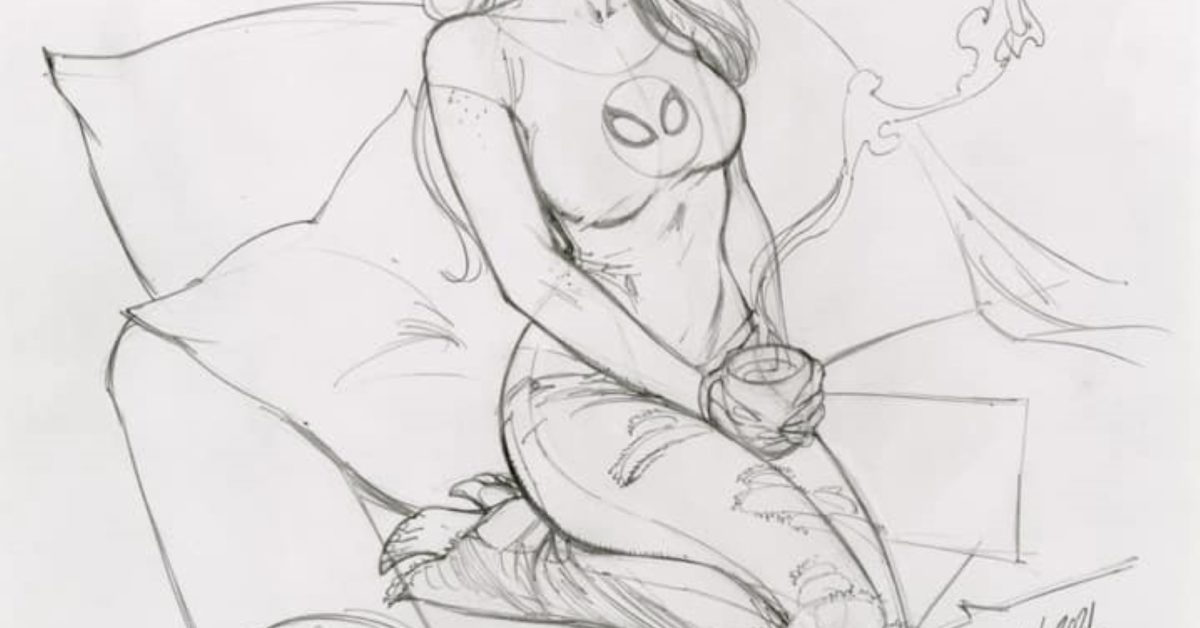 Classic BC, wouldn’t expect anything less… or more. And if anyone is interested in owning this little treasure of internet discussion, it’s currently up for bid for a very worthy cause!

The biggest misconception is that I took personal offense to this highly seen viral meme. On the contrary, I used it more as a teachable moment that this sort of “fixing” especially in this tone, is not appreciated by the art community as a whole. Most seemed to enjoy it and get it for what it was.

Maybe we read too much into J Scott Campbell’s earlier statement “Now typically I just ignore this sort of thing, but it seemed to go a bit viral with even friends and colleagues reposting it explaining that this sort of “correcting” of other well-established artists is just, well… tacky, which it is.” But, indeed, his original art version of his fix is on eBay right now and, as time of writing, has had 57 bids of up to $14,700.

Authentic J. Scott Campbell pencil sketch of “The Fix” of the cover art of the Amazing Spider-Man #601 variant featuring MJ. The piece is unpublished. The original artwork is penciled by J. Scott. The piece is signed by the artist.

Here’s your chance to bid on a what will certainly be a treasure of comic book and internet lore for generations to come!! Yes YOU could be to owner of the Mary Jane Amazing Spider-Man #601. 100% of proceeds will be donated to Fresh Artists, an innovative nonprofit empowering compassionate, creative and capable young people to tackle the critical shortage of arts funding in our public schools.

We create real-life opportunities for kids to engage as philanthropists, to exhibit their artwork in high profile places for decision-makers to see and to deliver innovative visual art programs and art supplies to public schools struggling with shrinking budgets.

Fresh Artists is honored to work with the hundreds of children represented in its collection and the Art Teachers who ignite their creativity inspiring them to share their stories.”

While the comic itself, Amazing Spider-Man #601 from 2009 is suddenly selling for huge amounts, $356 for CGC 9.8 and $150 raw. And he’s not done. J Scott Campbell has used the attention to create an artistic challenge;

Draw THIS in YOUR Style!

Recreate my cover to The Amazing Spider-Man #607

Recreate this image however you please, traditional drawing, digital painting, molded in clay, zBrush, cosplay photography, with macaroni, whatever medium you please! But it must be YOUR original art! No altering of the original art file.

Attach the hashtags: #DrawThisInYourStyle #ReDrawASM607 #JScottCampbell so I and the rest of the community who’s participating can find you and see what you’ve done! And anything else you feel like tacking on.

Be encouraging to one another. This is social media, so critiques kind of come with the territory, but there’s a polite way to discuss what you like and don’t like about someones art and a less polite way. I’ve been at this awhile so criticisms don’t really affect me like they did when I was much younger, but most artists will admit that when you’re in the early development stage of becoming an artist, criticisms, especially harsh ones, can cut deep. So be mindful of that.

I may even jump in to and see how I myself might draw this same image from years ago differently today! And throughout the week I will do my best to highlight some of my favorites via Instagram story shoutouts, reposts and twitter retweets, etc.

So give it a try if you’d like! Use it as a palette cleanser between #MerMay drawings! And most importantly, have FUN! Creating art should be fun.

And join the conversation? What are YOUR opinions about re-draws? Are they totally inbounds or are they disrespectful? Did I leave anything out that should be brought up or mentioned? Go ahead and leave them in the comments.

I’ve had a lot of aspiring artists ask me questions the past several days about what is considered acceptable and what is considered rude or in bad taste when it comes to re-draws, draw-overs, recreations, homages, that sort of thing. So I wanted to take this opportunity to help clear a few things up.

Artists generally are pretty cool, and more often the case, even honored to see aspiring artists, homage and recreate their images in that artist’s own style. And sometimes perhaps with an unexpected twist. These are perfectly fine if done with respect to the artist.

Here are a few things that aren’t usually appreciated. For starters, telling an artist straight out that what they drew was “wrong” or “bad”. Not a great start. Exclaiming to the world that you are “fixing” the art because it didn’t fall within the range of your particular taste or sensibilities doesn’t make you look too good to most people. And definitely going into someones actual art and moving things around and painting over it is absolutely a NO NO! Many artists also don’t really want the association with taking their art and doing the “X-rated” version that contains added nudity, that sort of thing, which should go without saying. Artists also don’t usually appreciate it if they go uncredited, so it’s also tradition to put “After *Artist’s Name” or hashtag them.

So, with that said I thought it might be fun to suggest an art challenge in the way of a Re-Draw. More specifically a “Draw THIS in YOUR Style!” I’m sure many of you have seen these around. So here’s a cover drew several years ago to The Amazing Spider-Man #607 featuring fan-favorite BLACK CAT! This was done around the same time as my very well known MJ on the couch cover. As you can see, this one is also a little playful and sexy. So what do you think? Too sexy, Not sexy enough? Just right? Or do you have something completely different in mind all together? Here’s the thing, redraws are not saying outright that the original wrong and are not bad. If you create something from scratch, it’s simply your interpretation with your own aesthetics and what is pleasing to your eye. So this is your opportunity to make some porridge Goldilocks! Is this Papa Bear’s porridge too, hot, too cold, or juuuuust right

I do think that the lady doth protest too much. Still, at least it distracts those with torches and pitchforks.