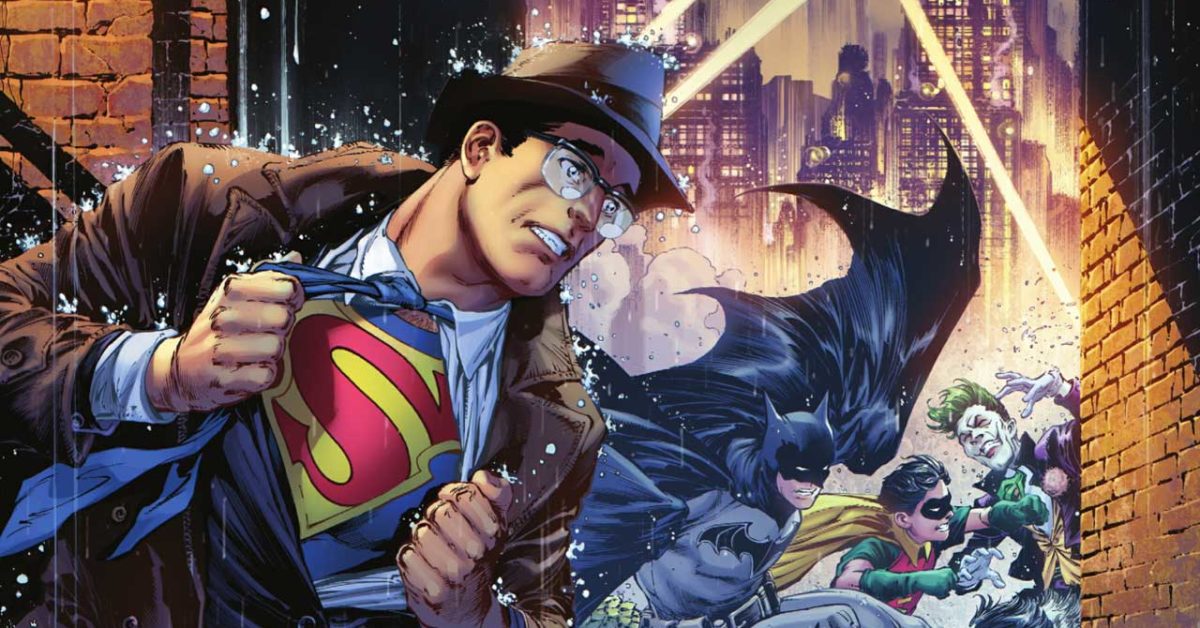 Batman/Superman #17 is an extremely overwrought issue with a virtual cascade of cliches that brings heroes of different continuities together in one of the least interesting manners ever. Two Kryptonians, two money-fueled detectives, and even two versions of Lois Lane … yet the sum is drastically less than the parts itself.

At the “meta” level, Superman and Batman are in space (this is one of those “Superman with a breathing mask” issues, like exposed eyes in the frozen wastes of space would be fine, and that modern incarnations of Superman don’t need air) attacking a new enemy (based on its bombastic introduction) who borrows a page from Gwenpool, but in a much slower and less interesting way.

Beneath the meta-level, a George Reeves-era version of Superman and his own era’s Lois Lane meets a “hrm”-ing Batman and his cheery Robin who seem like they’re from the 1930s maybe. This happens because the aforementioned new enemy has whole continuities on, apparently, old-fashioned celluloid film, and the film gets both ripped and burned, allowing characters to enter other storylines.

The art from Ivan Reis, Danny Miki, Sabine Rich, and Saida Temofonte is presentable, ably rendering the ideas presented here without concern or distinction. Admittedly, they did create one of the most disturbing looks for the Joker ever, possibly patterned after an Aeorian nullifier (nightmare fuel if you do want to look it up). However, the Gene Luen Yang script is heavy-handed and spends most of its page count setting up a plot point that did not need that long of a wind-up.

The result ends up a lot of old ideas wrapped up in modern metatextual influences in a less than inspired fashion. Everybody here had the tools to do the job; this just wasn’t their day. RATING: NO. JUST … NO.

In a world where Superman’s rocket never reached Earth, the Dark Knight and his sidekick discover a startling rift between dimensions. On the other side? A world where Martha Wayne survived, and Bruce never grew up to be Batman! Not only that, but a strange alien has emerged from the rift who’s faster than a locomotive and can leap tall buildings in a single bound… the Superman of Metropolis! When these worlds collide, the architects of this alternate history are revealed, and the only ones who can thwart their deadly experiments are the Batman and Superman of Earth-0! It’s a dynamic dual-world adventure!