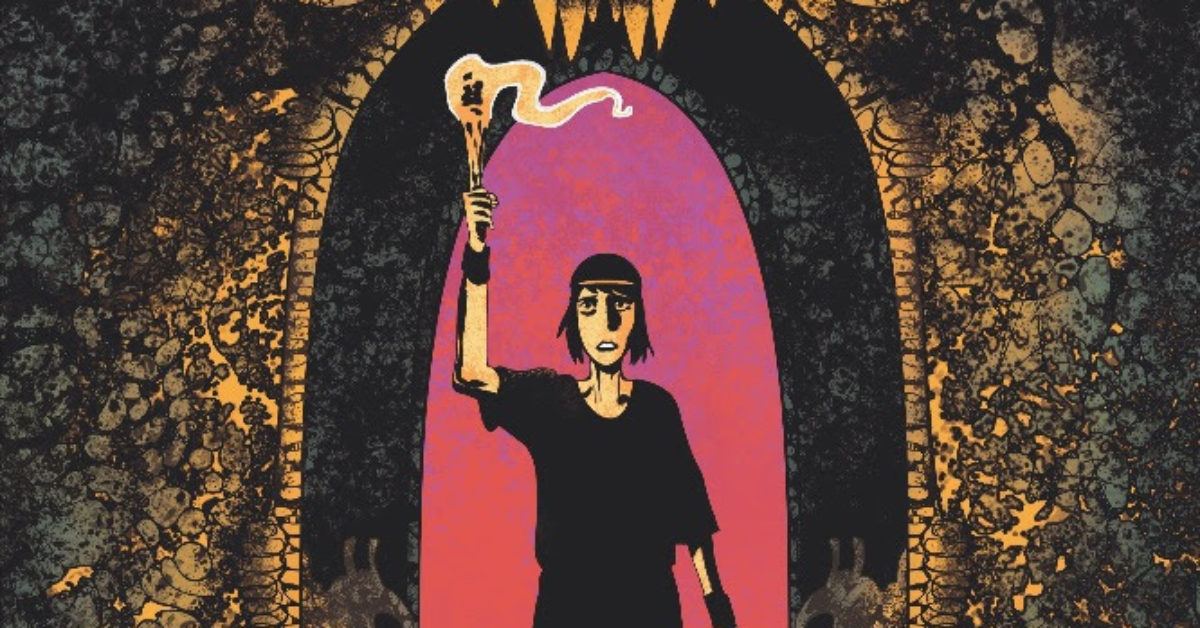 (Disclaimer: I edit one of Patrick Kindlon’s forthcoming comics. Run The Dungeon isn’t that comic.)

Independent publisher Z2 announced Run The Dungeon, an OGN from writer Kindlon (We Can Never Go Home, There’s Nothing There, Patience! Conviction! Revenge!) and artist Goran Gligovic (The Bawdy Tales of Lazlo Cale). On its face, the announcement makes sense. Z2 works with a lot of music artists (Babymetal, The Grateful Dead, Cypress Hill, and Major Lazer), and Kindlon is the vocalist for three bands that I’m aware of: Drug Church, Loss Leader, and Self Defense Family. Having said that, the artists Z2 usually works with sell 20 times what Self Defense Family sells, so scale is important here.

Brooklyn Vegan premiered a song from the OGN’s soundtrack called View From Beneath, which you can stream here.

Kindlon was kind enough to send over a couple pages from Run The Dungeon, and here they are. (Would Jude call this an EXCLUSIVE PREVIEW?)

NEW YORK, NY— Z2 Comics has proven to be THE home for the best in music-inspired graphic novels, and further that no pairing is alike, introducing an original graphic novel by Patrick Kindlon (We Can Never Go Home, Nobody Is In Control) and emerging artist Goran Gligovic (The Bawdy Tales of Lazlo Cale), with an original soundtrack by Kindlon’s band Self Defense Family. The result is one of Z2’s most immersive experiences yet, blending comic book storytelling, music, and an original and completely playable RPG.

“Being trapped in a scary stone labyrinth got entirely too dark and serious for me the past decade. I found myself wanting to read a proper 2nd Edition D&D style dungeon crawl. Where death is looming, but your job is to laugh in its face” says Patrick Kindlon. “Goran’s work inspired me to actually write what I’d been imagining, because he perfectly captures the energy of good-natured adventure. His art makes me feel like I’m in a basement with friends, arguing the effectiveness of the magic missile spell. Building Self Defense Family into the project came naturally as these were ideas we’d been talking about for some time while Chris expanded into composing music for TV. Run The Dungeon is the result of these two things colliding into a complete storytelling experience for me, and I think for readers as well.”

Relst is just your average young man. Except he is stuck in an Endless Dungeon. Follow his “adventures” through the Dungeon hoping to escape to the surface world. Run the Dungeon is for fans of witty fantasy adventures everywhere. Includes a soundtrack from Self Defense Family and an original pen and paper RPG based off of the book.

Publisher Josh Frankel says “Run the Dungeon is something that has been in the works for quite some time, dating back to a time when we could all still catch up in Artist’s Alley or at a nearby hotel bar, talking comics and music, and how to create something totally new for fans of both. This project feels every bit as fun, fresh and unique today as it did the first time we spoke about it. I am thrilled to see this one finally making its way into the hands of fans of his band as well as comic book readers and gamers alike.”

The Run the Dungeon graphic novel comes in at over 100 pages of fun and will be released in a standard softcover edition in comic shops and bookstores alike in August 2021, as well a special deluxe edition available for preorder now only through the Z2 website, which will include a special exclusive vinyl edition Self Defense Family’s original soundtrack in a strictly limited edition of 500 copies! Standard editions include a code to download the soundtrack through Bandcamp.

Rise Of The Slime Is Like Slay The Spire, But You’re… A Slime
Vodafone Giants partners with Nesquik
Two murder mysteries and a game about smashing walls compete for the IGF grand prize
Random: Elon Musk Appears On Saturday Night Live As Wario
The best games like Rimworld and Dwarf Fortress