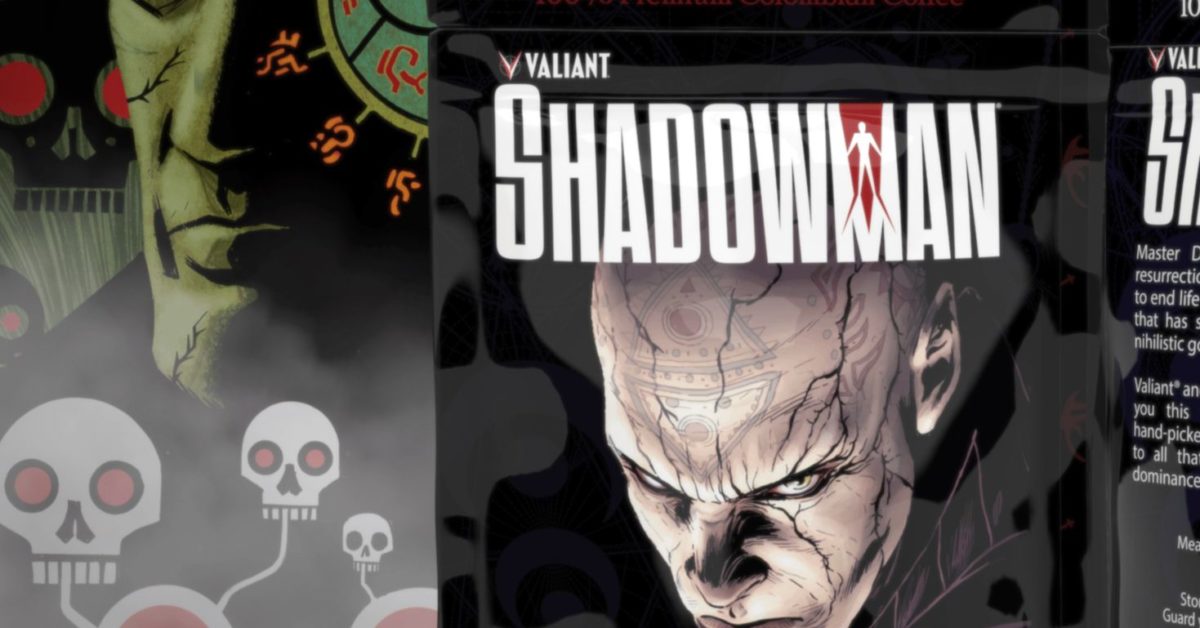 Former Valiant Executive Editor Joe Illidge may have recently spilled the tea on the new Shadowman series, but a new press release from Valiant is encouraging Shadowman fans to drink some coffee. Yes, you heard that right. Valiant has partnered with Geek Grind Coffee Company to release two different roasts based on the Shadowman Comic. No, seriously! The press release asks:

Why have ordinary coffee when you can take a sip of a supernatural roast?

Valiant Entertainment has partnered with Geek Grind Coffee Company to release two SHADOWMAN coffee roasts: the Spirit of the LOA Medium Roast and the Darque Roaste! These special roasts are made from 100% single source, small-lot Columbian coffee from women-owned farms.

Um… okay? And Valiant President of Consumer Products Russell Brown had this to say:

The quality of Greek Grind’s mountain-grown coffee, their ethical Colombian origin production process, and marketing prowess are all of the highest standards that Valiant looks for. And we’re so excited to have
coffee and tea this special to sip out of our Valiant mugs!

Don’t forget to let your coffee bloom before brewing. Like Valiant’s PR department, it’s full of hot air and other gasses.

As fans for many years of the Valiant deep library of characters, I can say that Geek Grind Coffee could not be any more excited to work with the Valiant team to develop this delicious line-up of releases. Today, more than ever, fans demand products that reflect their passions which they can integrate into their daily routines. Coffee and tea products translate very well into these needs while delighting and surprising those same fans with gorgeous packaging and world-class coffee direct from our own family farms in Colombia.

The cost is $16 for a 12-ounce bag, which isn’t out of line for premium roasted coffee. There is no option on the website to specify whether you want whole bean or ground, though the bags appear to have a checkbox for both. Of course, if you buy your coffee pre-ground, you might as well just stick a valiant comic book in a bucket of hot water and drink that, so hopefully, the default is whole bean. You can buy the Spirit of the LOA blend here and the Darque Roaste here.

An Espresso roast inspired by Bloodshot is also coming in the future. A special blend where the beans pass through the digestive tract of a Tyrannosaurus Rex had to be scrapped when Geek Grind learned Valiant no longer had the Turok license. Shadowman #1, by Cullen Bunn and Jon Davis-Hunt, hits stores this Wednesday, April 28th.

Like the new Shadowman series by Cullen Bunn and Jon Davis Hunt, this Darque Roaste coffee will pair well with milky white cream and sugar.

Shadowman Spirit of the LOA is actually one of the better ideas Valiant and Geek Grind came up with, like the X-O Manowar blend designed to taste like a thousand years of sweat buildup inside his armor.

Hideo Kojima’s book The Creative Gene is up to 20% off at Amazon before its October release
London Cartoon Museum Reopens – V For Vendetta Exhibition Next Week
Retro shooter Zombies Ate My Neighbors is getting a PC release
Lost Judgment Heads to PS5 and PS4 Worldwide This September
A Year of Free Comics: Get caught up in the magic of FOUR LEAF