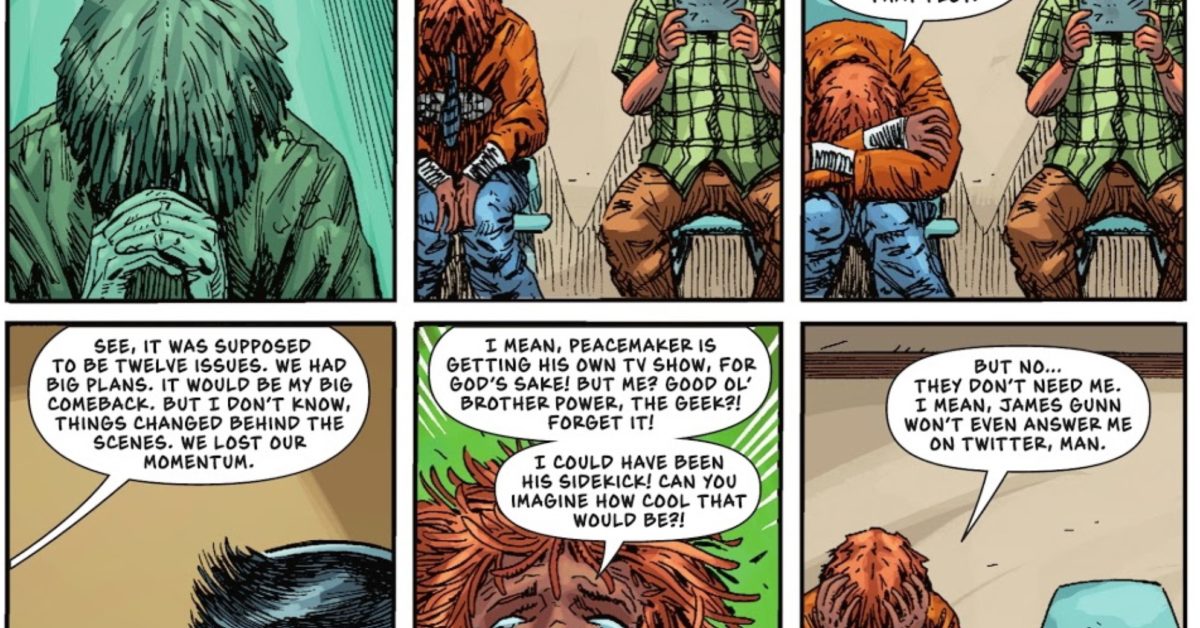 It’s Brother Power The Geek time! Keith Giffen and Jeff Lemire’s Inferior Five was a DC Comics series from 2019 that really didn’t get the orders it deserved. A twelve-issue series, a few months in, it was reduced in length to a six-issue series. Then the final issues got later and later. And finally, it was cancelled with the fourth issue, with all orders for issues 5 and 6 cancelled and leaving the series ending on a cliffhanger. That was even before pandemic shutdowns, and lockdown kicked in. It was ahead of its time in many ways. Those final issues were meant to be resolicited, just as with Batman Vs Ra’s Al Ghul. However, over a year on, that hadn’t happened. But in March, without any publicity, DC Comics suddengtly published issue 5 digitally. And today have done the same with issue 6. It is Bleeding Cool’s belief that someone at DC Comics revived the completion of the series, co-starring Peacemaker, so they can pout a trade paperback together in time for the Suicide Squad movie and/or Peacemaker TV series. But it also seems that Jeff Lemire and Keith Giffen have made a few revisions ahead of publication.

Sweet Tooth by Jeff Lemire, Heckler by Keith Giffen, obviously. Because The Inferior Five issue 5 gave us a world in which DC Comics kept publishing the Invasion series from the eighties even after the mini had ended – the opposite of what happened with Inferior Five. But it set the scene for some of the meta-nonsense that would conclude the series.

Not only do we have their very different version of Red X, playing off the current Teen Titans Academy storylines (which also have Peacemaker in them., he gets around…) But also has Brother Power The Geek lamenting his lot about how the series got cut in half.

Discovering that he is not in the Suicide Squad movie, even though everyone else is, and that the original comic book plans would have given him a prominent role. And that James Gunn is ignoring him on Twitter.

Brother Power the Geek was created by Captain America co-creator Joe Simon in 1968. Derived heavily from Mary Shelley’s Frankenstein right down to reanimation with the use of lightning, Simon was attempting to capture the sort of “wandering outcast philosopher” characterization that made Marvel Comics’ Silver Surfer a cult hit among the college student readers of the period. The series was cancelled after two issues.

The character was revived briefly two decades later, first in a short story by Neil Gaiman in Swamp Thing Annual #5 in 1989  and then in a Vertigo one-shot by Rachel Pollack and Mike Allred titled Vertigo Visions – The Geek. He has had a hanful of sporadic references and appearances since. Peacemaker could have been his moment.

James? Give Brother Power some Twitter love. We know you read Bleeding Cool…

INFERIOR FIVE #6
written by KEITH GIFFEN and JEFF LEMIRE
art by KEITH GIFFEN and MICHELLE DELECKI
backup story written by JEFF LEMIRE
backup story art by JEFF LEMIRE
cover by HOWARD PORTER
The Inferior Five make their last stand—and since it’s their final issue, it really is their last stand! Plus, is Dangerfield, AZ, going up for sale? It’s not even a nice place to visit, so who would want to live there?
6 OF 6 | 32 PAGES FC | DC FINAL ISSUE