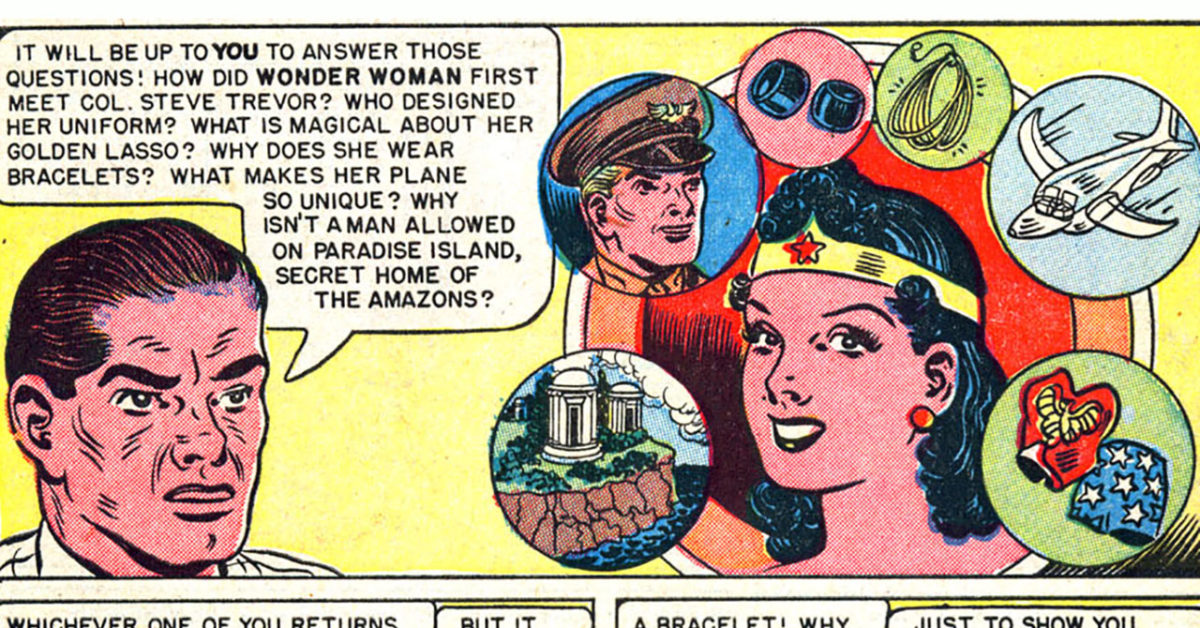 We’ve talked about this before: Superhero origins are not born. They evolve into what they are over years and sometimes decades.  For example, Batman’s Joe Chill, and Superman’s coming of age with the death of Pa Kent were both added and/or elaborated upon a decade or more after the first-told origins of those characters. The Flash got an interesting early “origin retold moment in Flash Comics #104.  Wonder Woman’s origin has also grown and evolved over time.  Wonder Woman #98, 99, and #105 have gotten plenty of attention over the years in this regard, but Wonder Woman #45 also deserves at least a footnote in this discussion. There’s a copy of Wonder Woman #45 CGC 5.0 up for auction in today’s session of the 2021 April 25-26 Sunday & Monday Comics, Animation & Art Weekly Online Auction #122117 from Heritage Auctions.

As with most classic comic book origin retold moments, Wonder Woman #45 remains true to the spirit of the original while refining or updating a plethora of details.  Most of the character’s now-legendary origin was told in her first appearance in All Star Comics #8 — though important background detail was relegated to a text story in that issue.  The Invisible Plane and Wonder Woman’s journey to Man’s World with Steve Trevor then took place in Sensation Comics #1, while the text-and-comics original version of the tale from All Star Comics #8 was retold in all-comics form in Wonder Woman #1 (1942).

It’s worth noting here that this is the first version of the character’s origin story not written by the character’s co-creator William Moulton Marson, who died in 1947.  Robert Kanigher scripted this cover story, with Wonder Woman co-creator H.G. Peter on art. Perhaps most importantly, the character’s origin moment is disconnected from World War II for the first time here — the nature of the war against evil is left open to interpretation within the context of the times.  Further, Hippolyte doesn’t forbid Diana from taking part in the contest to choose who will go to Man’s World, saying that the honor must be won in competition, and implying that other Amazons may well win.  The Invisible Plane becomes an Invisible Jet for the first time here, and is said to be a gift from Aphrodite.

With these and other refined and upgraded details, this issue is deserving of every collector of the character. There’s a copy of Wonder Woman #45 CGC 5.0 up for auction in today’s session of the 2021 April 25-26 Sunday & Monday Comics, Animation & Art Weekly Online Auction #122117 from Heritage Auctions.