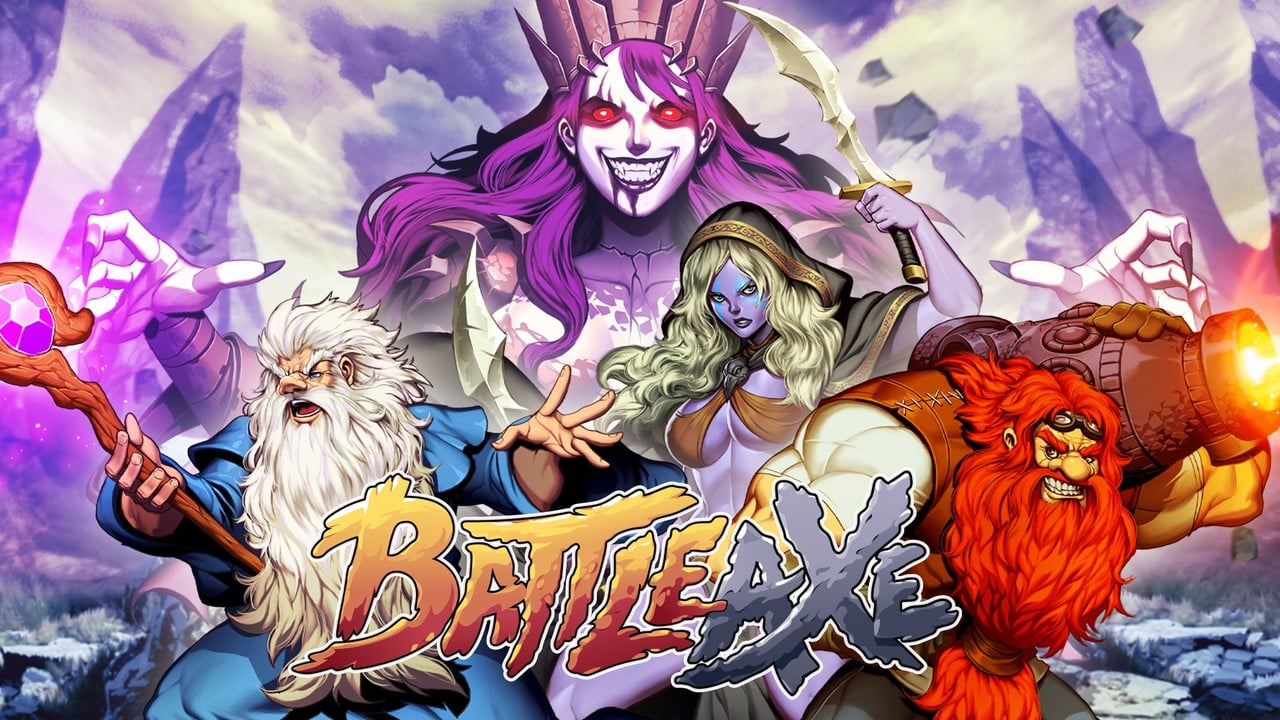 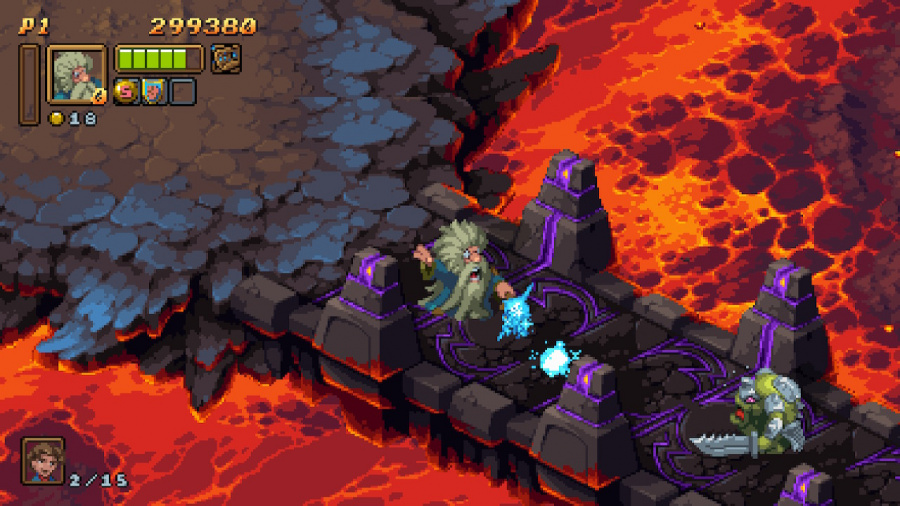 Veteran pixel artist Henk Nieborg’s old-school throwback, Battle Axe, seeks to replicate the classic top-down hack and slash action of arcade classics such as Gauntlet, Knights of the Round and Golden Axe. With Nieborg himself on graphical duties and legendary composer Manami Matsumae (Mega Man, Final Fight, Shovel Knight) providing the soundtrack, this one certainly more than manages to nail the look and feel of its most obvious inspirations. However, a lack of content and modes, alongside tired gameplay that doesn’t mix things up in any interesting or surprising ways across a fairly brief running time, leaves this feeling like a rather lacklustre effort.

In Battle Axe players choose from one of three warriors, Rooney, Fae or Iolo and – in either solo or two-player local co-op – set out across the land of Mercia in order to rescue innocent locals who’ve been snatched away by the dastardly sorceress Etheldred and her hordes of evil minions. Split over four short levels, the game sees you blast through foes using your chosen fighter’s three unique combat abilities comprised of a weapon attack, ranged projectile and special move. 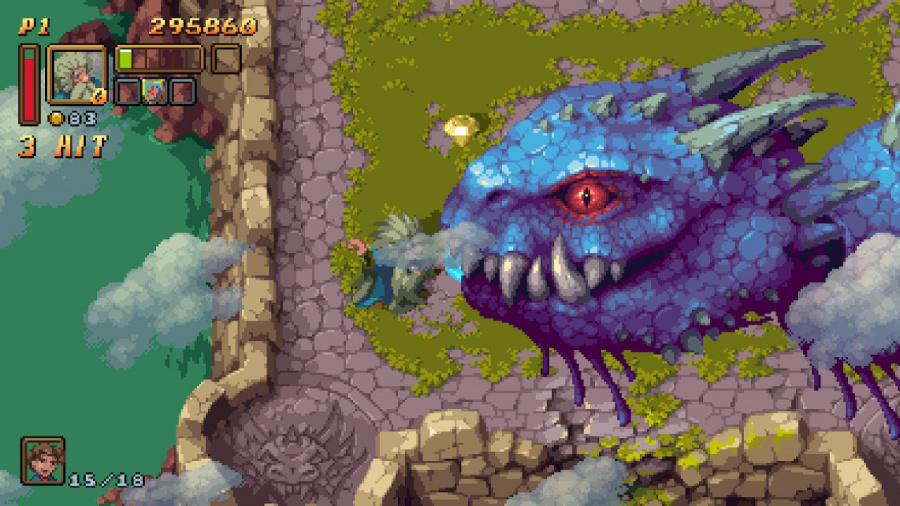 Rooney makes use of cannon balls for close quarters and ranged damage, for example, and can pull off a powerful charge dash that’s capable of wiping out multiple opponents at once. Fae wields twin blades, flings deadly daggers from distance and can zip in and around arenas at speed, whilst Iolo – our own favourite of the trio – can teleport, fire off powerful blue energy balls and get up close and personal with his…well his beard, for vicious hairy melee attacks.

On paper there certainly seems to be plenty of diversity in the move sets you’ve got at your disposal but, in all honesty, the moment-to-moment action doesn’t really pack in much variety. Regardless of warrior choice we found ourselves relying almost entirely on our ranged attacks in order to mill through the goblins, orcs and skeletons that stood in our way. On both hard mode – which the game defaults to when you first boot up – and easy difficulty setting, we just never found ourselves needing to mix up our tactics all that often, and this is mainly because the enemies don’t provide much in the way of a strategic challenge beyond the occasional mass pile on.

Indeed, for the most part here the threat presented by your foes consists almost entirely of them mindlessly charging in your general direction – with the exception of Mandragores, a few flying bugs and a handful of tower-bound baddies who stand off to use ranged attacks – and as a result the rhythm of Battle Axe’s combat feels seriously one-note. It’s definitely solid enough in the little it chooses to do, weapons feel satisfying and it looks and sounds fantastic, but it’s just not particularly interesting or exciting because it never steps out of its comfort zone. Of course you could argue it’s remaining faithful to the golden oldies that inspired it, but it feels as though this one needed a few more modern flourishes or a bigger injection of creativity in order to give its action a lift. What you’re doing here the minute the game kicks off is exactly what you’ll be doing by the time it ends, and it’s a shame. 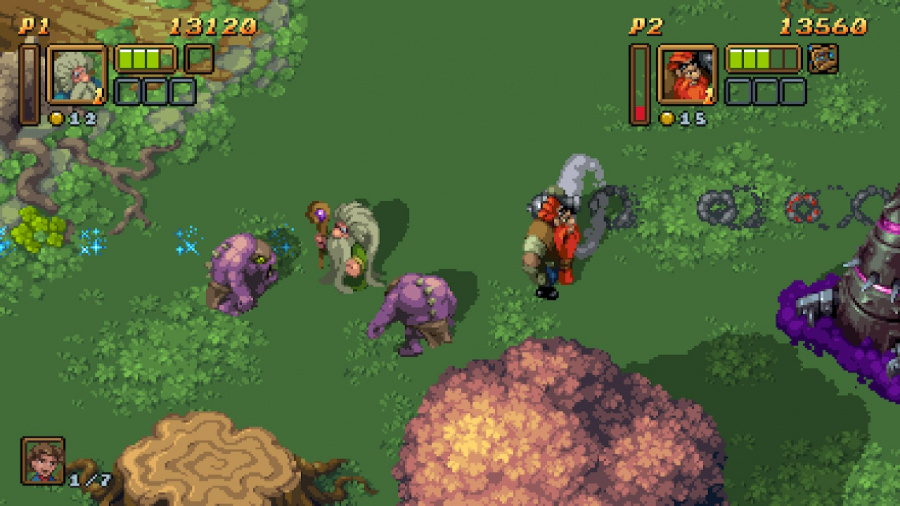 There are the expected pick-ups to grab as you mill around levels – everybody loves a nice health-replenishing chicken dinner – but again this aspect feels somewhat undercooked, with just a health potion, a rather useless bomb and a spell scroll that blasts your surrounding area with fire to round out the available items. You can also gather gems and coins to shop at a merchant between stages, and this mechanic feels much more interesting as you decide whether to purchase a permanent health upgrade, extra shielding or maybe even a bomb or healing item to help propel you through the next area.

This weighing up of the pros and cons of picking between health items, upgrades or weapons – especially on hard mode where you need to complete an entire run without auto health refills between rounds – feels like the most interesting aspect of the game but, again, it doesn’t reach its full potential because the whole thing is over before it feels like it’s really gotten started; there just aren’t enough levels here to make you feel as though you’re properly up against it.

Yes, unfortunately, Battle Axe is a short experience, surprisingly short, in fact. For the rather hefty price tag involved here we really were fairly startled when we first came face to face with the final boss battle after around forty minutes of play (on easy mode), and once you’ve been through the four levels on offer here a few times there really isn’t a great deal to warrant many, if any, return trips. Yes, there’s a NG+ mode that switches things up a little, with mirrored level layouts, a few nasty surprises jumping out of chests and far more in the way of baddies making a beeline for the business end of Iolo’s bushy beard, but it’s just not enough to stop the whole thing feeling a little lacklustre and disappointing from a gameplay perspective. 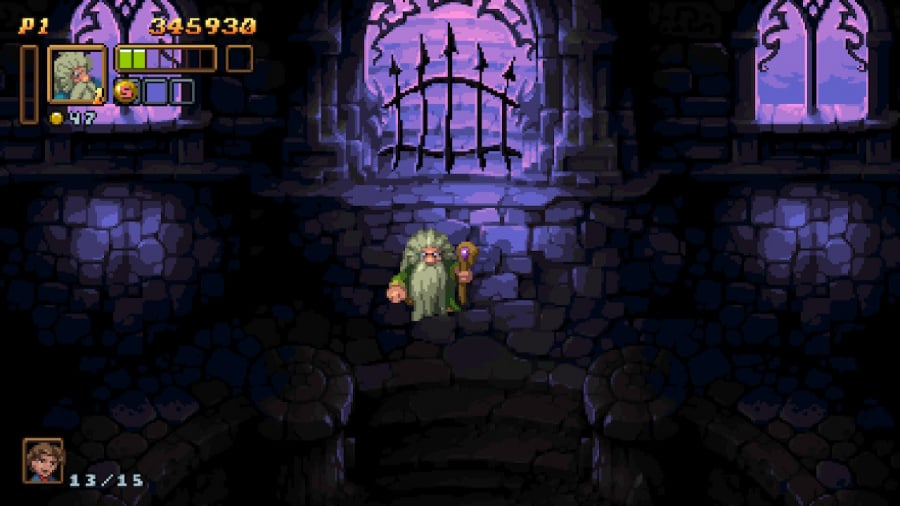 Even switching things up to hard mode, once you’ve played through the handful of levels a few times and got a handle on where and when enemies appear, it doesn’t make for much of a difference in the challenge you’ll actually face beyond the game’s bosses flinging a handful of minions at you in a desperate attempt to up the ante. Speaking of bosses, the end of stage face-offs aren’t much to write home about either, requiring little more than spamming your ranged attack and moving out of the way of repetitive and easy to read projectiles. We had little to no trouble in getting past these encounters until we switched things up to NG+ where the game chooses to simply spawn an annoying number of bog-standard enemies into the mix, in a brute-force and rather slapdash effort to make things more difficult.

On a more positive note, as we’ve already mentioned, Battle Axe’s action does at least look and feel great, with Nieborg’s supreme pixel skills ensuring that every enemy you smack or thwack explodes in a satisfyingly violent manner, whilst characters are imbued with a really nice sense of weight and heft through the exquisitely detailed animations provided by the veteran artist.

It’s just a shame, then, that the gameplay couldn’t provide more in the way of surprises or thrills. Levels here feel quite underwhelming and pedestrian, a handful of simple short corridors and boxed off arenas with no set-piece moments, no mounts to ride around on à la Golden Axe, and no secrets, treasures or hidden paths to stumble upon. There are a handful of simple achievements to unlock for completionists and offline leaderboards to conquer but, besides this and that NG+ mode, you really aren’t looking at a lot of content to blast through. 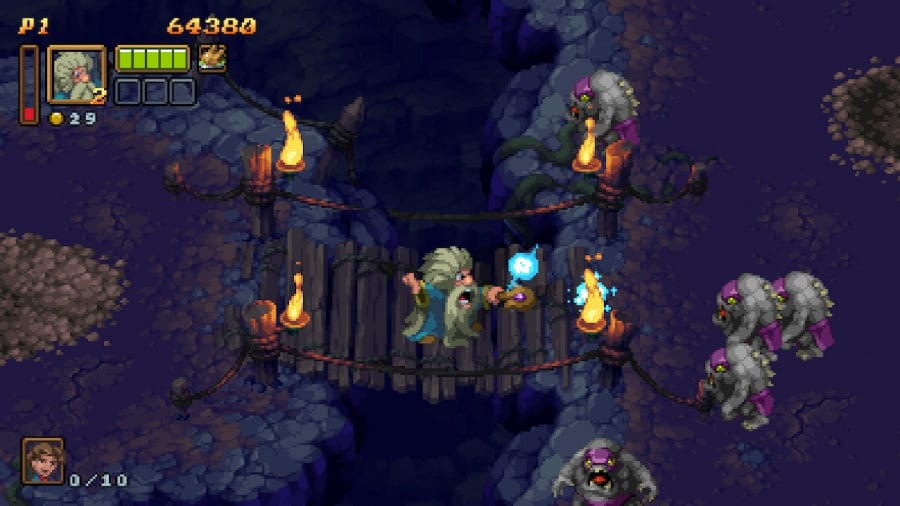 With regards to this Switch port, we also had a few framerate issues mar our experience, with some considerable wobbles on a few occasions, most noticeably during the game’s one indoor section; that surprised us given the old-school nature of the graphics and gameplay here.

Overall then, Battle Axe is a very good-looking game, for sure, it’s got a fantastic soundtrack and its hack and slash action certainly isn’t the worst we’ve ever encountered, but it’s all just far too one-note. It plays things much too safe and is over way too quickly, making for a game that, especially for that rather premium price tag, is pretty hard to recommend.

Battle Axe is a good-looking homage to the classic hack and slash arcade efforts of yesteryear that’s dragged down by some fairly dull and repetitive action. It looks the part, sounds the part, nails the aesthetic and vibe that it’s going for completely, but then it drops the ball with regards to level design, enemy AI and in providing any sense of strategy or surprise during a short campaign that gives you very little reason to return once its done and dusted. If only it had a few twists and turns and a handful more levels, this one could have been well worth a playthrough but, as things stand, it’s pretty forgettable stuff.