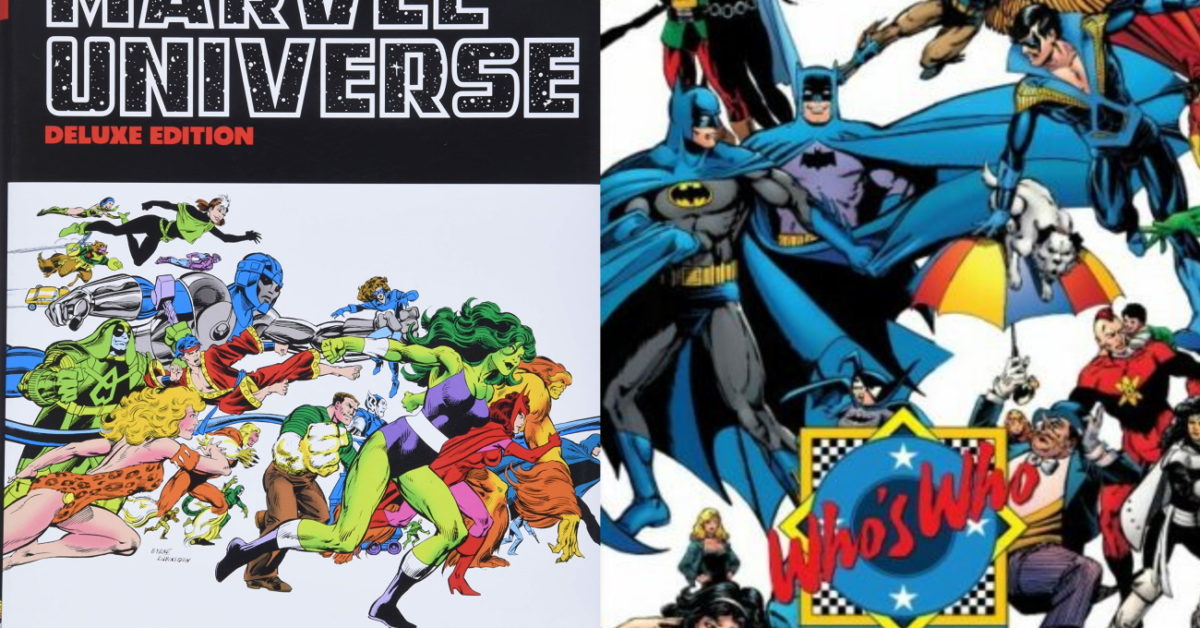 Comic book archivist and researcher Peter Sanderson celebrated his birthday this weekend, and seemed to get a coincidental present through the post. This past month saw the publication, simultaneously, of Marvel’s Official Handbook Of The Marvel Universe Deluxe Edition and the DC Comics’ Who’s Who Omnibus Vol 1, volumes that Sanderson devoted much of his life to. He writes;

Today’s Good News: Yesterday I got a mysterious package from Diamond in the mail that turned out to be a complimentary copy of “The Official Handbook of the Marvel Universe Deluxe Edition Omnibus.” I was the principal writer on that series, and it’s so nice to know that my work lives on and to be reminded of the days when Marvel and DC both valued my services. Speaking of which, I wish DC would send me a copy of their recent “Who’s Who in the DC Universe” omnibus, which I helped to research and write. But does DC even know how to find me? Should I get a reprint fee for this? (I recently got a tiny check from Disney/Marvel.) John Byrne did most of the covers for the Deluxe Handbook including the one used as the Omnibus cover This reminds me of the days long ago when I used to talk to John every week. But he drifted away, and I wish we were still friends.

Comic creators and fans responded in their hundreds – here’s a few select examples from names you may know;

Christos Gage: To this day I use the copies I bought in the Eighties as reference!

Mike Marts: Loved every word that you wrote, Peter!

David Mack: I very much enjoyed these books as a kid & learned so much from them. Thank you for your hard work on them. Also the interview you did with Frank Miller & Klaus Janson in The Daredevil Chronicles, was very formative & educational to me at a young age. Thank you.

Scott Koblish: DC will. There is no need to worry about it. Just make sure your address is up to date with them, if there are any recent changes.

Peter Sanderson: Well, who at DC would I contact and how?

Marie Javins: They have their ways.

Editor-in-chief of DC Comics there. and yes, she does have her ways. Sanderson continued;

I feel touched by the outpouring of appreciation for my work on the Official Handbook of the Marvel Universe in the 1980s on my Facebook page today. I wish that the Handbook’s creator Mark Gruenwald could see how much people still appreciate it. And it again makes me wonder why Marvel and DC in the 21st century don’t appreciate my work as much as many of you do.

First look and premiere date revealed for MASTERS OF THE UNIVERSE: REVELATION
Get ready for PlayStation’s Celebration of the community with Days of Play 2021
Glitchangels Review
INTERVIEW: Kevin Kolde talks ending this chapter of the CASTLEVANIA story
New Pokemon Snap secrets | How to access all secret and alternate routes