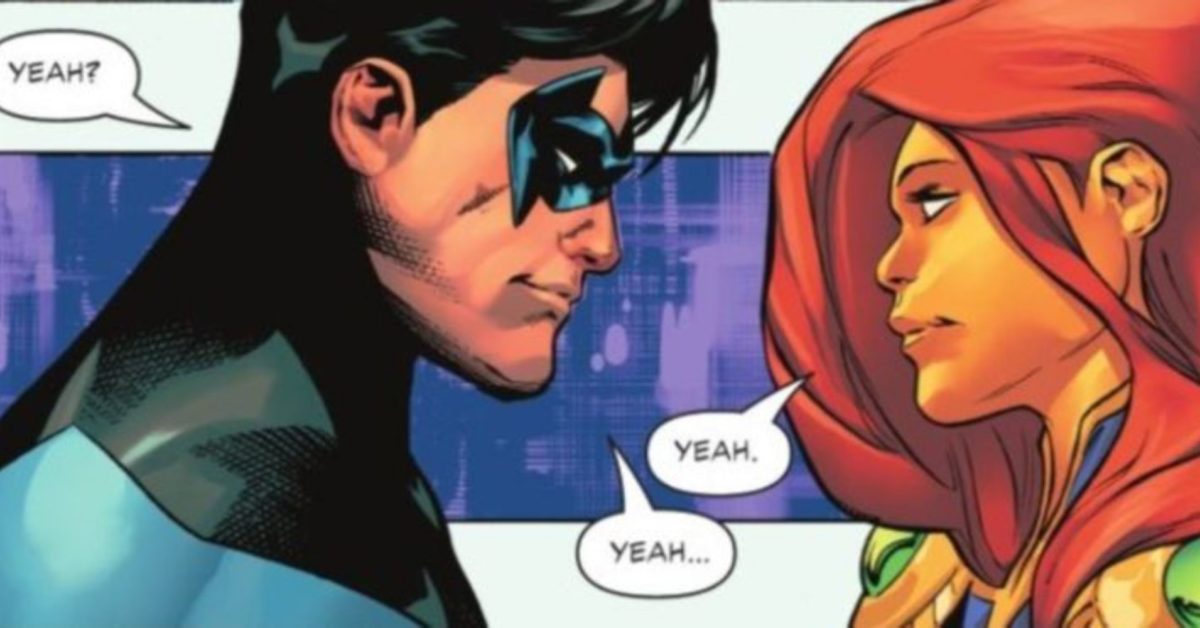 The following article will include spoilers for recent Nightwing and Death Metal comic books that you have probably read but also Teen Titans Academy #2, out this Tuesday, which it is possible you have read – but less likely.

Dick Grayson, Nightwing and Barbara Grayson, Batgirl, have has an on and off-again relationship over the decades, in the Batman comics. And so have Dick Grayson and Starfire, Kori Koriand’r, in the Teen Titan comics.

Recently in Death Metal, Grayson and Gordon got married by Batman, in a fashion that suggested that since reality was about to be rewritten, it wouldn’t count. It wouldn’t matter.

And Starfire even expressed she was happy for the two of them. But in the Infinite Frontier that followed, everything happened and everything mattered.

In Teen Titans Academy #1, there was what appeared to be flirtation between Dick and Kori. And the suggestion of a date, with Dick Grayson wearing the Red X mask that had been found.

In Nightwing #79 we had the revelation that Dick Grayson and Barbara Gordon had known each other before either were Nightwing or Batgirl.

And in Nightwing #80, Dick Grayson also had a date with Barbara

As well as a really weird way for Nightwing to signal “four” like he was in Inglourious Basterds or something. Seriously, see if you can copy that. I can’t. Another superpower? But back to Teen Titans Academy #2 out this week.

And in Teen Titans Academy #2, it appears that they both went there. Though without the mask…

And talked about Barbara Gordon. “It’s not like that” and he can “juggle both”.

We’ve noted that the upcoming Robin series this week focuses on the concept of resurrection, in the same way that current X-Men comic books do, with the Krakoan protocols. Could it be that Nightwing, Batgirl; and Starfire are going to go the same way as Cyclops, Jean Grey and Wolverine?