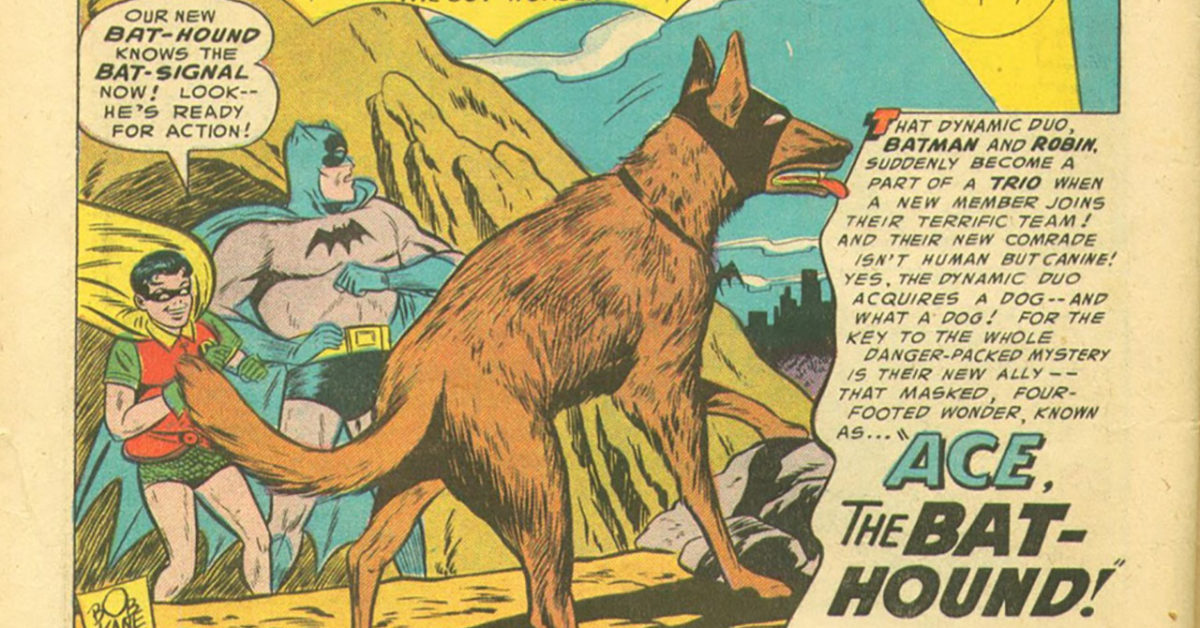 The 1950s was the decade of the dogs at DC Comics.  Rex the Wonder Dog had his own comic book series in the era, while Superman’s dog Krypto and Ace the Bat-Hound debuted less than 3 months apart in 1955.  But while Krypto is practically a household name, and Rex’s original run has garnered some diehard fans, poor Ace seems little remembered by comparison.  But every dog has his day, and there’s a Batman #92 CGC 4.5 featuring the first appearance of Ace the Bat-Hound up for auction in today’s session of the 2021 April 25-26 Sunday & Monday Comics, Animation & Art Weekly Online Auction #122117 from Heritage Auctions.

Like most hero dogs in media, Ace the Bat-Hound owes a debt of inspiration to the likes of famous crime-fighting canines like Rin Tin Tin and the Ace the Wonder Dog. In fact, both Rin Tin Tin and Lassie were featured in popular and long-running tv shows which began in 1954, the year prior to the debuts of both Krypto and Ace.  But the rise of the 1950s dog stars at DC more properly began even before that. Streak the Wonder Dog practically took over the Green Lantern titles from his master at the end of the prior decade. Streak debuted in Green Lantern #30 in early 1948. By the time the title had run its course and ended in 1949, Streak was the dominant figure on most of the covers and even had his own solo feature in that title, as well as a prominent place in Green Lantern’s All-American Comics stories of the period.  Then in 1952, the team who had created Streak the Wonder Dog in Green Lantern — Bob Kanigher and Alex Toth — rebooted their comic book pup for the post-superhero era into a white-furred former military K-9 Corps German Shepherd called Rex the Wonder Dog.  Rex had his own series, which lasted for 46 bi-monthly issues through 1959.  Meanwhile, Krypto and Ace debuted at the peak of this 1950s dogstar mania.

The debut of Krypto in Adventure Comics #210 has long been considered a major (and expensive) key, while Batman #92 is incredibly affordable by comparison. Created in a story by Bill Finger and Sheldon Moldoff, there’s a Batman #92 CGC 4.5 featuring the first appearance of Ace the Bat-Hound up for auction in today’s session of the 2021 April 25-26 Sunday & Monday Comics, Animation & Art Weekly Online Auction #122117 from Heritage Auctions.

View the certification for CGC Certification ID 3727553019 and purchase grader’s notes if available.