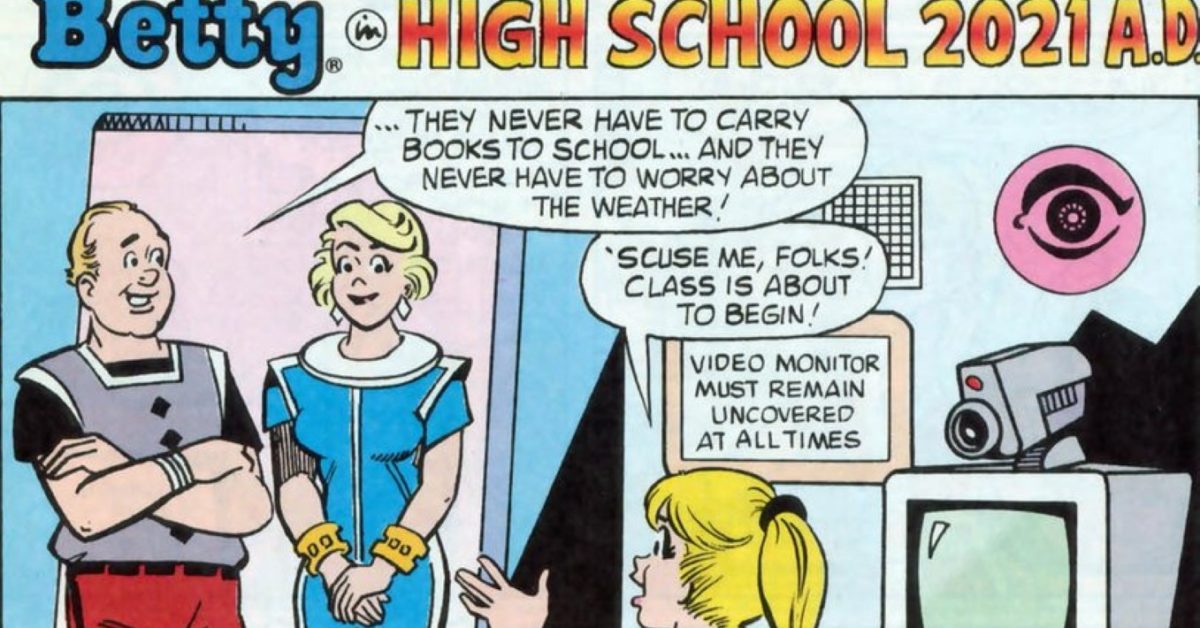 A couple of weeks ago Archie Comics went viral and made the news for a 1997 Betty comic book which had Betty Cooper going to high school via computer and set in the year 2021. After being posted by Archie Comics, then picked up by USA Today, and fact-checked by Snopes, the story went everywhere. First published in Betty #46 in February 1997 written by George Gladir with art by Stan Goldberg, Mike Esposito, Bill Yoshida, and Barry Grossman, the story was even called Betty in High School 2021 AD and had the Archie cast using virtual education, using a computer and webcam. The story was reprinted in 2015 with the year shifted forward to 2104.

As a result, the comic started to jump on eBay, with copies selling, for $30, $40, $50 each before jumping to $75. And now, after all the fuss, it is to be reprinted again, in the new 80th anniversary special Everything’s Archie #1.

ARCHIE 80TH ANNIV EVERYTHING ARCHIE #1 CVR A DAN PARENT
ARCHIE COMIC PUBLICATIONS
APR211431
(W) Fred Van Lente (A/CA) Dan Parent
FIRST ISSUE IN AN ALL-NEW SERIES OF 80TH ANNIVERSARY ONE-SHOTS! Finally Archie declares his TRUE LOVE, and its a very expensive guitar! So Archie picks up a few extra jobs to make some cash, what could go wrong?! Spies, TV Execs, tech warfare, nothing in Riverdale will be the same! No place is safe when Everything’s Archie!In Shops: Jun 09, 2021 SRP: $3.99

Warzone Celebrates Call of Duty League 2020 Champions In-Game With Statue and Player Banners at the Stadium
PSA: The May 2021 PlayStation Plus Free Games Are Now Available, Including Wreckfest on PS5 and Battlefield V
Hideo Kojima’s book The Creative Gene is up to 20% off at Amazon before its October release
Cult 1992 cinematic platformer Flashback is getting a sequel
PUBG MOBILE National Championship set to debut in UK