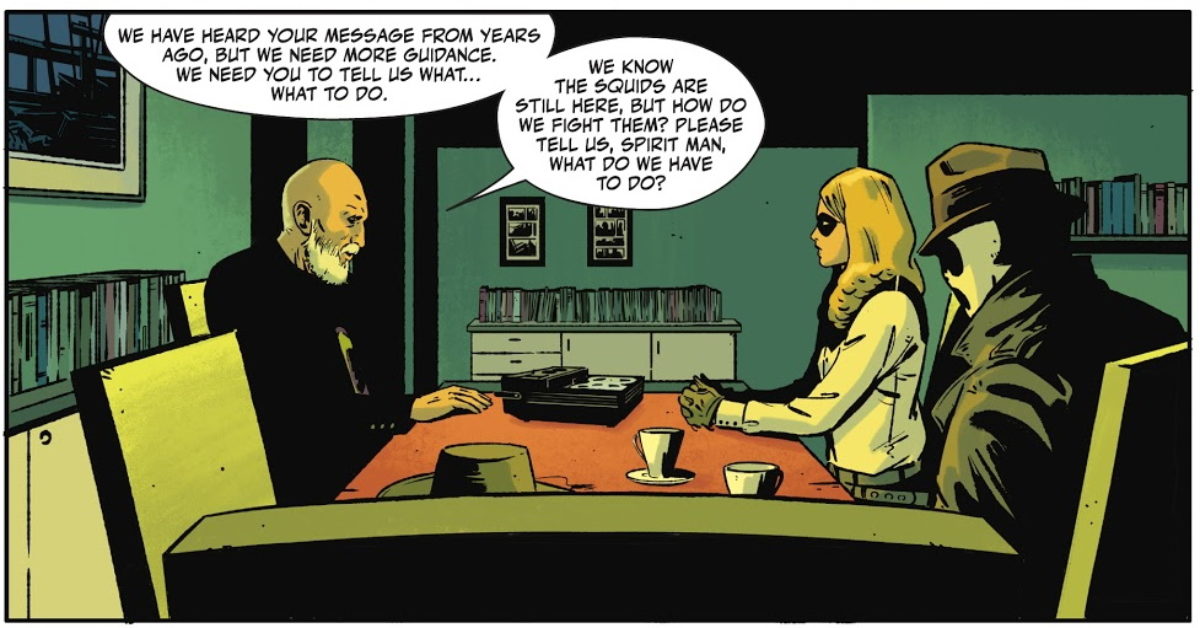 In Rorschach #1 by Tom King and Jorge Fornes, an unauthorised sequel to Watchmen published by DC Comics, we learned of a copy of a tape by Wil Myerson, a character based on Steve Ditko and who takes up the Rorschach identity in 2020, before trying, and failing to assassinate the Presidential candidate Turley.

The tape is based on a very real tape, made by veteran comic book creator, Otto Oscar Binder who died in 1974,  best known as the co-creator of Supergirl and for writing Captain Marvel comics, but wrote over 4000 comic books in his life. Accompanying him is Randy Cox, notable comic book curator and vintage art collector, author of A Baby Boomer’s Guide to Collecting Comic Books and Baseball Cards.

And then there is also the teenage Frank Miller In Otto Binder: The Life and Work of a Comic Book and Science Fiction Visionary by Bill Schelly, who died two years ago, he talks of the Miller driving with Randy Cox to visit Otto Binder in 1973, and the words on the tape are those that appear in Rorschach #1 – the only difference is that in Rorschach, they are not joined by Tom Fagan but joined by one Will Myerson, the fictitious comic book creator of Pontius Pirate.And in today’s Rorschach #7, the Detective visits Frank Miller to ask about the tape. It all taps into the conspiracy theories of Laura Cummings, Wil Myerson – and Frank Miller. We can compare and contrast with the Rorschach version and the version reported by Bill Schelly. Because Rorschach #1 doesn’t give you the reams of text that Watchmen did, these pages from the Otto Binder book may add more. Buy the book to read the rest.

With theories about how the seance tape was actually getting messages from Dr Manhattan. And that’s who Otto Binder’s Spirit Man was.

And so Frank Miller, Wil Myerson and Laura Cummings get to make a new one.

As I said, this is the craziest comic book DC Comics have published in a very long time. And it gets crazier.

RORSCHACH #7 (OF 12) CVR A JORGE FORNES (MR)
(W) Tom King (A/CA) Jorge Fornes
Wil Myerson might have been the creator of Pontius Pirate, the most popular comic in history, before he put on the Rorschach mask and tried to kill a would-be president, but he’s not the only artist who worked on the character. Other artists fell under Wil’s influence, and now all these years later, he too has fallen under the sway to Laura, the #1 Myerson superfan. Is it possible she influenced another comic book legend into playing vigilante? The key here is that tape the detective is trying to decipher, the one with the séance that has been haunting him since the very first issue! All this and a cameo by Dr. Manhattan to boot! In-Store: 4/13/2021 $4.99

INTERVIEW: Olivia Cuartero-Briggs opens up about SILVER CITY
Fortnite new guns – here are all the new weapons in Fortnite Season 6
Extended Play promotion comes to PlayStation Store
SEGA has no plans to bring Lost Judgment to PC “at this time”
BaseStack unveils gaming and esports training centre in Poland