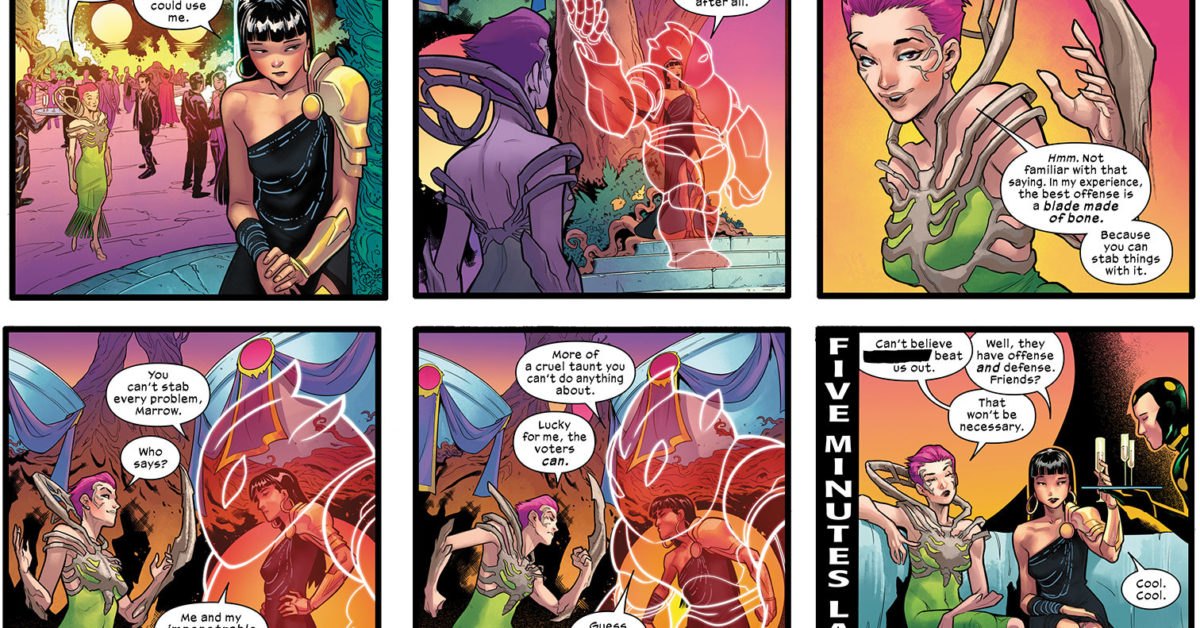 I confess that Marrow won my vote. Even if Marvel Comics really needs to sort out the creative credits for her. But it seems that she and Armor are both out of the running for a member of the X-Men.

A couple of months ago, Bleeding Cool broke the Marvel news that people were going to be able to vote for a mutant character to join the X-Men team. And that the winner would actually be in the team, and would be announced in the new Hellfire Gala. And presumably in the new X-Men series by Gerry Duggan, relaunching in July. This was the list of potential team members.

Previously, Marvel put a couple of candidates out of their misery, Strong Guy and Forge. Today, they eliminated two more, Armor and Marrow.

With Marvel tweeting out this story, The Best Offense by Zeb Wells, Emilio Laiso and Rachelle Cheri. Offense and defense? It’s definitely going to be Polaris, right? Here are the solicits and on-sale dates for the Hellfire Gala.

Marvel  On Sale 6/2
HELLIONS #12
Written by ZEB WELLS
Art and Cover by STEPHEN SEGOVIA
WHO INVITED THE HELLIONS TO THE HELLFIRE GALA?
Who thought it was a good idea to invite the antisocial HELLIONS to the fanciest bash of the year? Oh, no one? They weren’t invited but they showed up anyway? Yeah, that sounds about right.

MARAUDERS #21
Written by GERRY DUGGAN & CHRIS CLAREMONT
Art by MATTEO LOLLI & JOHN BOLTON
WELCOME TO THE HELLFIRE GALA!
The Hellfire Trading Company has put together the biggest event of the season – the very first HELLFIRE GALA! Everyone will be there – all your favorite mutants, their closest allies…even their worst enemies – for a night of dinner, drinks, diplomacy and deceit. Fireworks to follow. Plus: From the archives, a classic X-Men tale with our very first look at a Hellfire Gala by Chris Claremont and John Bolton!

X-FORCE #20
Written by BENJAMIN PERCY
Art and Cover by JOSHUA CASSARA
INVITE-ONLY TO THE HELLFIRE GALA!
It’s party time, but somebody’s got to work it. And when invited guests (and a few crashers) prove to be planted antagonistic agents, X-FORCE will need to get their hands dirty and keep this all under wraps…before anyone catches wind!

Marvel On Sale 6/9
EXCALIBUR #21
Written by TINI HOWARD
Art by MARCUS TO
Cover by MAHMUD ASRAR
RICTOR HATES PARTIES.
Even the nice ones. And with Captain Britain’s return to a changed world, this one is looking to be not so nice. Excalibur’s Earth-shattering HELLFIRE GALA issue will change Krakoan diplomacy forever.

X-MEN #21
Written by JONATHAN HICKMAN
Art by RUSSELL DAUTERMAN, NICK DRAGOTTA, SARA PICHELLI & LUCAS WERNECK
Cover by LEINIL FRANCIS YU
THE HEROES OF KRAKOA DEBUT!
It’s a changing if the guard as the first X-Men team of Krakoa debuts! One era ends as a new one begins, and the handoff happens here.

Marvel On Sale 6/16
NEW MUTANTS #19
Written by VITA AYALA
Art by ALEX LINS
Cover by MARTIN SIMMONDS
AND I’LL CRY IF I WANT TO…
The HELLFIRE GALA is here, and the NEW MUTANTS have the chance to take a break from training the youth of Krakoa – an opportunity to get dressed up and get down. But not everyone is on their best behavior…and someone has vanished without a trace.

PLANET-SIZE X-MEN #1
Written by GERRY DUGGAN
Art and Cover by PEPE LARRAZ
Variant Cover by PEPE LARRAZ
THEY CAME TO SLAY!
The HELLFIRE GALA rages on, but bigger things are afoot a world away. Make no mistake – this is an X-Men book drawn by superstar artist Pepe Larraz. It is absolutely the most important issue of the month.

X-CORP #2
Written by TINI HOWARD
Art by ALBERTO FOCHE
Cover by DAVID AJA
A SHARK IN THE WATER!
After X-CORP’s shocking debut, they’ve got fences to mend, hands to shake and most importantly – a board to staff. With Dr. Jamie Madrox’s top-class dupes staffing the HELLFIRE GALA, CXOs Monet and Angel must stalk the dance floor and hope they don’t get preyed on themselves.

Marvel On Sale 6/23
S.W.O.R.D. #6
Written by AL EWING
Art and Cover by VALERIO SCHITI
THIS IS WHAT COMES NEXT.
On Earth, the HELLFIRE GALA is in full swing. But on S.W.O.R.D. Station One, a very different guest list comes together…as Abigail Brand finally unveils her plans for Mysterium – and the future of human and mutantkind.

WOLVERINE #13
Written by BENJAMIN PERCY
Art by SCOT EATON
Cover by ADAM KUBERT
HELLFIRE COMPROMISED!
Can WOLVERINE and X-FORCE keep the peace or is the gala doomed?

On Sale 6/30
X-FACTOR #10
Written by LEAH WILLIAMS
Art by DAVID BALDEÓN
Cover by IVAN SHAVRIN
THE LAST DANCE!
At the Hellfire Gala, SECRETS WILL BE REVEALED! VENGEANCE WILL BE HAD. And someone’s number is up. You’ll never guess whose.