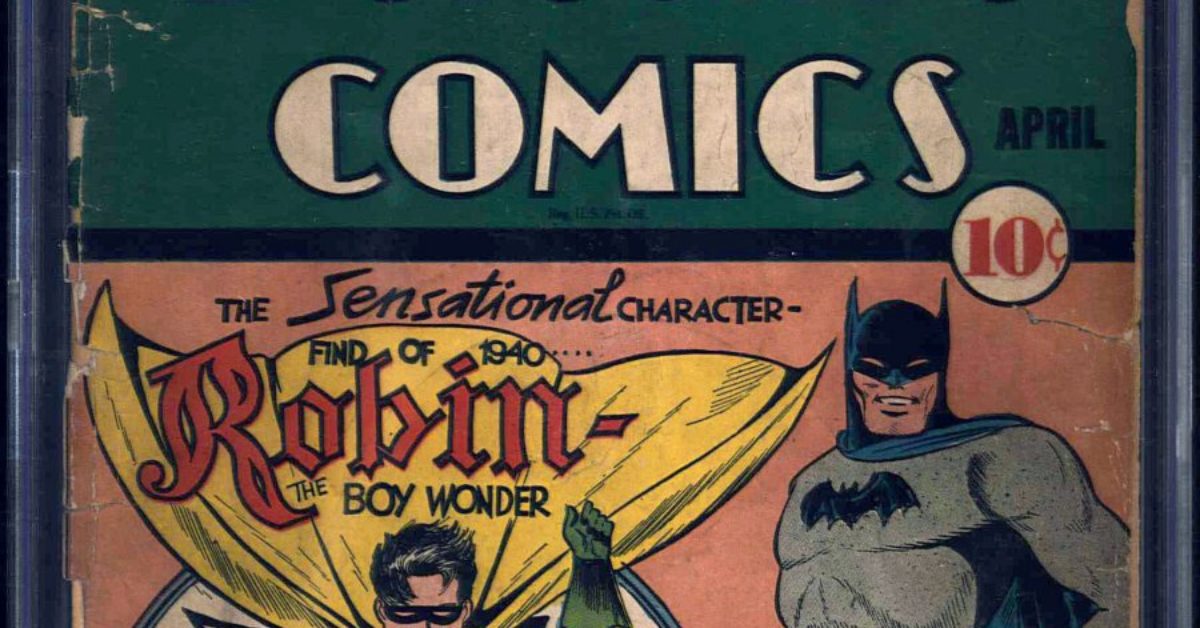 Dick Grayson, Robin, first appeared in 1940 alongside Batman in Detective Comics #38. Even then, they were appealing to speculators on the cover. And for once, they were right. Even if the comic was kept in the very worst condition, it still sells for tens of thousands. Detective Comics #38 in CGC 1.5 is up on the ComicConnect Auction listings today, Tuesday the 13th, and at the time of writing, has bids up to over $15,000, when the guide price for a condition in 2.0 is just over $12,000. How much higher than guide value will this go? When the spine of the cover is split, the cover is detached, and it looks like this:

lt tan/ow pgs; spine of cvr completely split & cvr dtchd
Bob Kane/Jerry Robinson cvr/art; origin & 1st app. Robin (Dick Grayson)
One of the most important issues of the Golden Age, Detective Comics #38 marks the promising debut of the best-known sidekick in the history of comics: Robin, the Boy Wonder! Dick Grayson, ward of millionaire Bruce Wayne, lends a hand to the Dark Knight when just one hero won’t do. Created in 1940 by the team of Bob Kane, Bill Finger, and Jerry Robinson, Dick Grayson’s tragic backstory concerning his similarly slain parents made him the perfect companion for the ominously orphaned Bruce Wayne. Robin attracted younger readers and doubled the sales of Bat-comics thereby solidifying the Batman mythos that would continue to grow in popularity through today. There have been many different iterations of the teenagers to don Robin’s trademark yellow cape, red suit, green boots and gloves but there will only ever be one original Boy Wonder. Bob Kane’s signature style depicts an exuberant Grayson bursting onto the cover and into legend.

An incredibly valuable and heavily desirable comic at any grade, this copy is sure to turn heads as there are doubtless innumerable Batman collectors pining away to own this important key but find themselves outbid at every turn. This auction is a perfect opportunity to snap up this book at a relatively affordable grade.

If you are a new customer planning to make a first-time purchase over $25,000, please contact us 24 hours in advance of the item closing at 212.895.3999 or support@comicconnect.com so that we may approve your account for bidding. (This policy was instituted to protect consignors and bidders against bids from fraudulent accounts, and to ensure the integrity of the bidding process.) Once approved, please log out of your account and then log in, for the approval to take effect.

A celebrity comic artist of the Golden Age, co-created Batman and Robin with Bill Finger, as his brainchild became more in demand he hired an army of ghost artists to illustrate the dearth of Batman features on the market, but all were credited to Kane. His other achievements include the creation of Catwoman, Two-Face and cartoon character Courageous Cat. Kane was the object of some controversy for taking credit for the art and inspiration of others, but he was also undoubtedly an important figure in the history of comics. He published an updated version of his autobiography “Batman and Me: The Saga Continues” shortly before his death in 1998. He got his start at the Eisner/Iger studio and was inducted into the Will Eisner Comic Book Hall of Fame.

Sherrill David Robinson known as Jerry Robinson, was an American comic book artist known for his work on DC Comics’ Batman line of comics during the 1940s. He is best known as the co-creator of Robin and the Joker and for his work on behalf of creators’ rights. He was inducted into the Comic Book Hall of Fame in 2004.