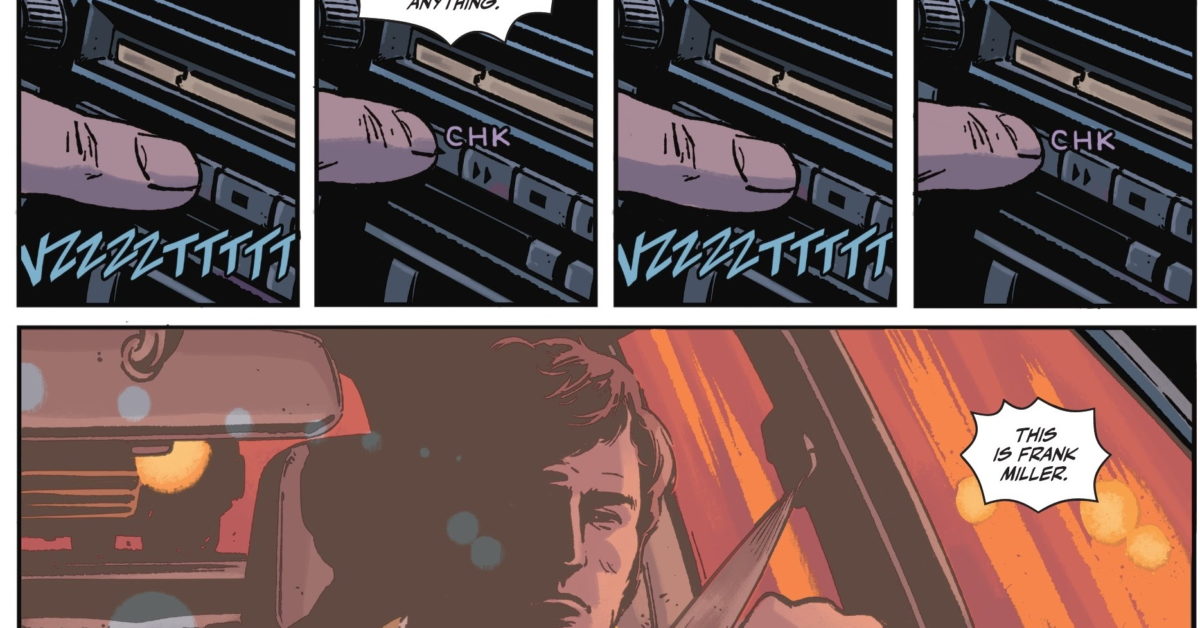 Rorschach, the unauthorised sequel to Watchmen by Tom King and Jorge Fornes, published by DC Comics. Published this week, Rorschach #7 looks to follow up directly from Rorschach #6. Which should not be a surprise.

And we are seeing The Detective following up on the lives of Laura Cummings and Wil Myerson, both of them killed trying to assassinate the Republican Presidential candidate, Turley. With Wil Myerson acting as a parallel for comic book creator Steve Ditko – with a little Alan Moore.

In Rorschach #1, we encountered a seance tape, based on a very real tape, but with Wil Myerson now a member of the group of comic book creators who were involved.

We asked if The Detective had gone to visit Frank Miller? Wondered if he would be in? And will he have a special visitor?

And now, courtesy of a leak from this Tuesday’s Rorschach #7 we have one answer. Not so much whether Frank Miller will be in for The Detective. But if he was in for Will and Laura.

In the Watchmen world, it seems, Frank Miller revived a pirate character called Seaman. And wrote and drew The Dark Fife Returns. Presumably following that with Seaman Year One. Tom King, you are being very, very silly. I wonder if DC had to get the image likeness rights for this?

RORSCHACH #7 (OF 12) CVR A JORGE FORNES (MR)
(W) Tom King (A/CA) Jorge Fornes
Wil Myerson might have been the creator of Pontius Pirate, the most popular comic in history, before he put on the Rorschach mask and tried to kill a would-be president, but he’s not the only artist who worked on the character. Other artists fell under Wil’s influence, and now all these years later, he too has fallen under the sway to Laura, the #1 Myerson superfan. Is it possible she influenced another comic book legend into playing vigilante? The key here is that tape the detective is trying to decipher, the one with the séance that has been haunting him since the very first issue! All this and a cameo by Dr. Manhattan to boot!In-Store: 4/13/2021 $4.99