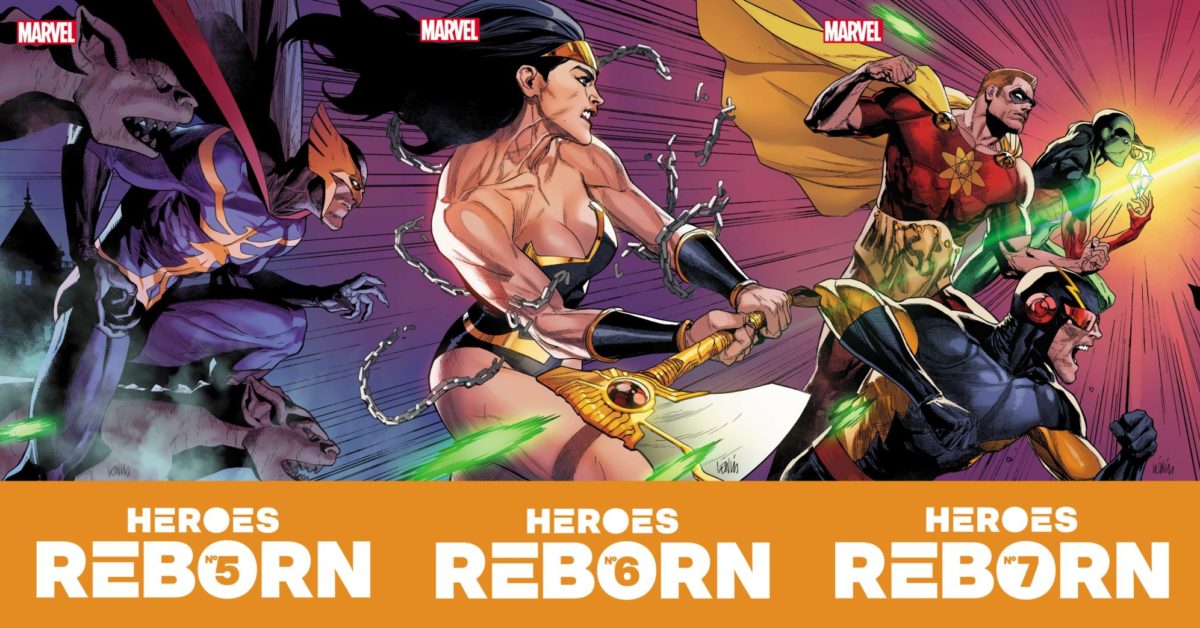 Heroes Reborn is a new Avengers-focussed event from Jason Aaron running through May and June. Heroes Reborn #1 is going to FOC tonight. Which is possibly how we have found ourself with a few teaing spoilers. Nothing, I think, that will ruin the comic. But might give you a greater idea of the world that is being created in the first issue with Ed McGuinness.

1. So Where Are The Avengers Then? This is the tease for Heroes Return from Marvel Comics. “Welcome to a world where Tony Stark never built an Iron Man armor. Where Thor is a hard-drinking atheist who despises hammers. Where Wakanda is dismissed as a myth. And where Captain America was never found in the ice…because there were no Avengers to find him.” We have a couple of others to add – Jennifer Walters never became the She-Hulk, and works as a lawyer. And Carol Danvers is a pilot, well-regarded, but never promoted to Captain and not in receipt of the powers of Captain Mar-Vell. Pietro died, which is how Wanda has his powers as the Silver Witch. The very existence of the Squadron Supreme stopped the Avengers from needing to be formed.

2. What’s With Blade, Then? Heroes Reborn #1 states “But why is the Daywalker Blade the one man alive who seems to remember that the entire world has somehow been…reborn?”I have theories for another day, but this is not a place for theories, but a place for spoilers. Because Blade is also the last of the vampires. It is not just a world without Avengers. But a world without vampires. And he is starting to think that this new world is a better one than the one with Avengers and vampires in it.

3. What’s Up In Doctor Doom’s Grill? Issue 2’s solicitations promises that “America’s solar-powered, super-sentinel of liberty looks to return his archenemy Victor Von Doom to the Negative Zone”. But doesn’t Doctor Doom have the might of an entire country behind him? Not any more. Doctor Doom was elected out of Latveria, after the Squadron Supreme forced the country to hold free and fair elections.

4. Who’s Got The Venom Suit? We all saw a Venom character with a red Hydra logo. That is The Black Skull, and it is the Red Skull, joined together with a symbiote, in a similar fashion as to how Norman Osborn became the Red Goblin on Earth 616.

6. Remains Of The Gods. The last of the Asgardians (if you don’t count Thor – and he doesn’t, he’s an atheist now) is All-Gog, the final All-Father of Asgard. There will be no more.

HEROES REBORN #1 (OF 7)
MARVEL COMICS
MAR210497
(W) Jason Aaron (A) Ed McGuinness (CA) Leinil Francis Yu
A WORLD WITHOUT AVENGERS!
Welcome to a world where Tony Stark never built an Iron Man armor. Where Thor is a hard-drinking atheist who despises hammers. Where Wakanda is dismissed as a myth. And where Captain America was never found in the ice because there were no Avengers to find him. Instead this world has always been protected by Earth’s Mightiest Heroes, the Squadron Supreme of America. And now the Squadron faces an attack from some of their fiercest enemies, like Dr. Juggernaut, the Black Skull, the Silver Witch and Thanos with his Infinity Rings. But why is the Daywalker Blade the one man alive who seems to remember that the entire world has somehow been…reborn?
Rated T+In Shops: May 05, 2021 SRP: $5.99