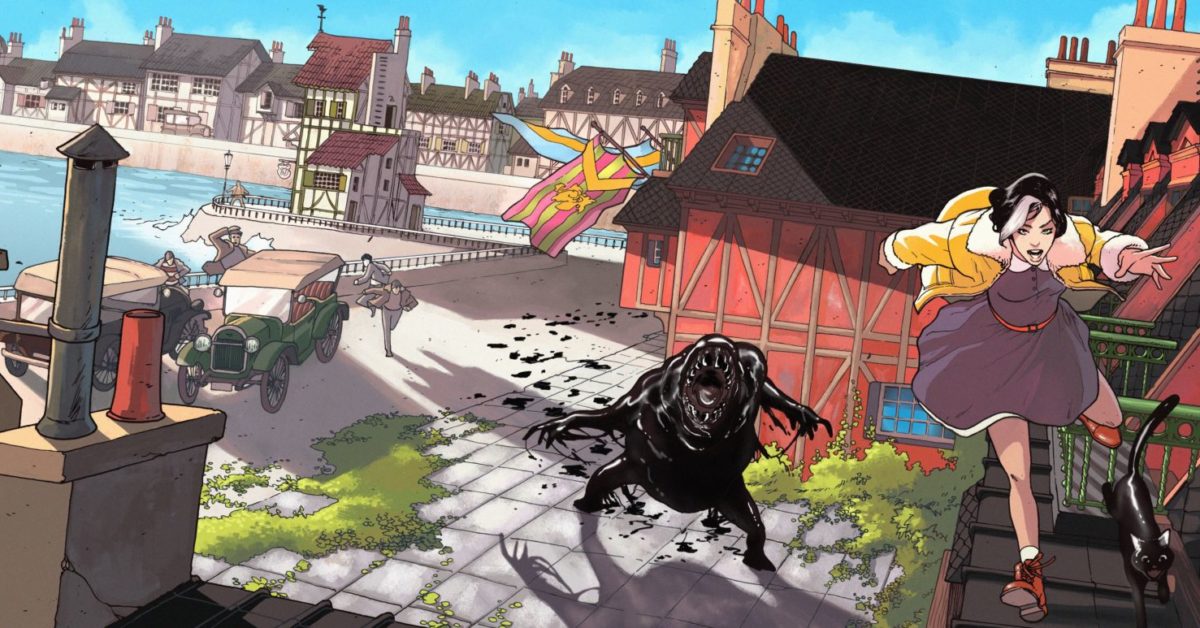 Camille Longley is the author of The Flameskin Chronicles and the writer for the comic Lampblack. She writes:

I was drawn to fantasy as a writer because it felt limitless. Dragons and flaming swords? Yes, please. Immortal empresses and heart-stealing demons? Why not? My books explore strange worlds and are full of magic that twists reality. I love bending the rules, seeing how far I can push things. Until I discovered a story, I couldn’t write.

It was Mabel who came to me first and sparked my muse. Mabel was an artist, and everything she painted came to life. At her side stood a Deaf boy, Sterling, who spoke with his hands and not his lips. They beckoned me to explore their world, a place I’ve named Lampblack. It was a whimsical and dangerous world, torn by war with skies full of zeppelins and flying ink creatures. In the shadows lurked the inkblots—monsters that rose from the enchanted ink.

I loved this story and the world that grew up around it, part charming fantasy, part delicious horror. Lampblack had everything I loved from the fantasies I enjoyed as a child: whimsical colors and settings like those in Studio Ghibli’s Spirited Away and Howl’s Moving Castle. Fantastic creatures that coexisted with humans like those in Pokémon and Harry Potter, but with more mature themes of war and reconciliation.

But Lampblack had a major problem. I couldn’t write it. I had an entire outline for what I wanted the story to become, but I couldn’t find the words. How could I describe the ink as it burbled and rose, forming dripping limbs and empty, black eyes or gaping mouths that swallowed victims whole? How could I accurately describe ideas and phrases shaped by hands and facial expressions instead of speech?

It was not a story I could tell alone.

Enter Pablo Peppino: a self-described cinematic comic artist. He is known for fabulous splash pages with gorgeous details and riveting action. Pablo caught the vision right away, giving shape and form to the ink creatures. The monsters I had struggled to describe Pablo gave life on the page, just like our artist Mabel. He expanded my vision of what Lampblack could be, bringing it to the stage of an enormous 8.5×11 inch landscape comic format. Damián Peñalba brought vibrant colors to our vision, supplying contrast and beauty to the darkness of the inkblots. Joel Saavedra completed the picture with his superb lettering and graphic design.

We contracted the help of a Deaf ASL professor, June Ann LeFors, and a Deaf variant cover artist Brittany Castle to help tell our story. Their insight shapes Sterling’s use of sign language and our treatment of Deaf culture.

For so long, my fantasy worlds had been something I created in my own head. But sharing this world with a team of talented artists expanded it in new and unexpected ways. My conversations with Pablo are peppered with discussions of Lampblack’s future: explosive mustard gas, zeppelin battles, a sea of ink, and monstrous house-sized ink monsters. I will always be a fantasy author, but I have found a new love in the comics medium. There are some stories that just can’t be told with words.
Help bring this comic to life by backing our Kickstarter. Back early to get access to early bird rewards and giveaways. The Kickstarter runs from April 8-May 6, 2021.

Talking Point: The Metroid Dread Credits Debate Is Sadly Common
Thor Grapples With Losing his Mojo in God of Hammers
Suit up with Crysis Remastered Trilogy Today for Xbox One and Xbox Series X|S
DC FanDome 2021 Will Offer New Reveals From Gotham Knights and Suicide Squad, Watch the Livestream Here
I should hate Assassin’s Creed Valhalla, so why have I played it for 120 hours?