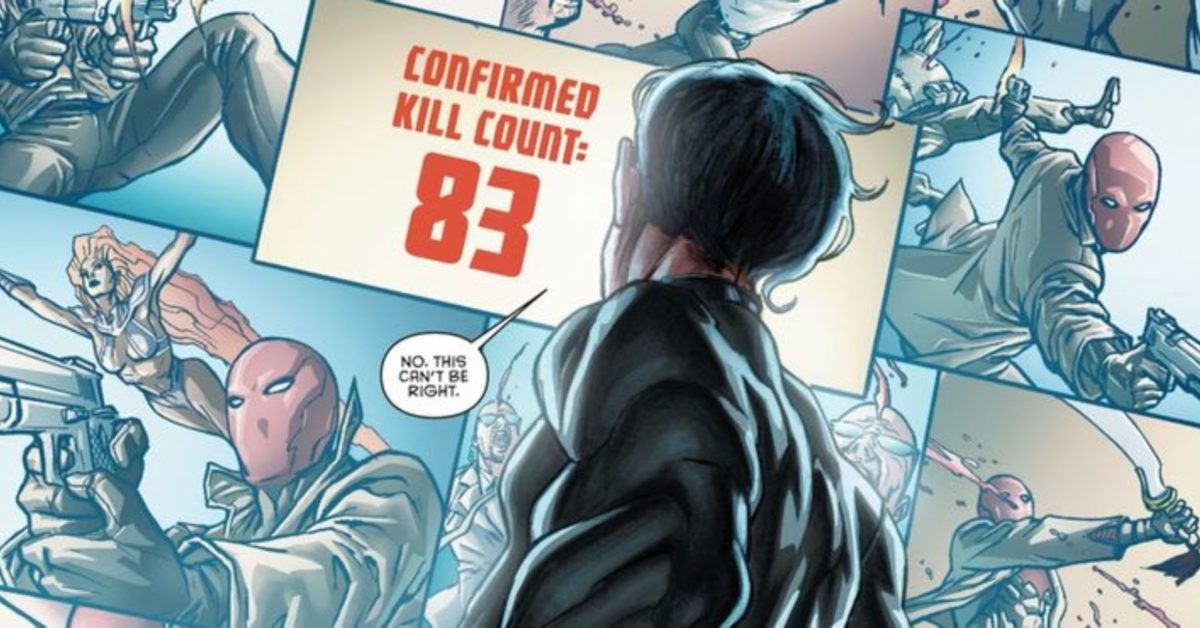 I get the feeling this is going to be debated for some time. Did Spider-Man kill Gwen Stacy by stopping her fall? What did the Joker do to Barbara Gordon when he captured her in The Killing Joke? And now it’s Jason Todd, Red Hood’s turn to go under the spotlight.

Jason Todd has killed a number of antagonists in his career as Red Hood, including Lightning Bug, Egon, jumping from one rebooted DC Comics continuity to another. The New 52 had a confirmed kill count of 83 for him at one point in the Red Hood & The Outlaws Annual, above. Well, he was murdered as Robin by the Joker and revived courtesy of the Lazarus Pit. The idea was that he came back different, ruthless, psychotic, willing to kill when Batman would not. But Tuesday’s Batman: Urban Legends #2 goes further. Last month saw him kill, for the first time, someone who was not an immediate threat of a murderer, but an uncaring, unrepentant drug dealer. Which was a new line for Red Hood to cross. But it seems it wasn’t the first time he crossed it. And flashback reveals all. Something very similar happened a long time ago.

There is no “CRACK”. No definite sign that the staircase fall kills the guy. But the sole shoe is representative of such. And this is long before anything could be blamed on any Lazarus Pit resurrection. Was Red Hood born this way? The debate will begin in two days, courtesy of Chip Zdarsky and Eddy Barrows…

BATMAN URBAN LEGENDS #2 CVR A HICHAM HABCHI
(W) Various (A) Various (CA) Hicham Habchi
The new Batman anthology series continues! In part two of Chip Zdarsky and Eddy Barrows’s epic Batman/Red Hood story, Jason Todd has taken a man’s life, and now his mission is to keep the dead man’s young son safe. But Batman plans to take down Jason before he can make another mistake. Then, in chapter two of Matthew Rosenberg and Ryan Benjamin’s senses-shattering tale, Cole Cash earns his pay as personal bodyguard to billionaire Lucius Fox, but what led him to Gotham in the first place? How does the mysterious HALO Corporation play into it all? And which Bat-Family character does he have an unfortunate meeting with in this chapter? And in part two of Brandon Thomas and Max Dunbar’s epic Outsiders story, see Katana’s perspective on what brought the Outsiders to Japan, who wants her dead, and what her ultimate punishment will be for no longer having her husband’s spirit in the Soultaker sword. Plus, Barbara Gordon has identified a citywide system hack from a foe she faced before as Batgirl…but this time around, Babs may have found a way to defeat her for good as Oracle!
Retail: $7.99

Two murder mysteries and a game about smashing walls compete for the IGF grand prize
Behind the Scenes of Zombie Army 4’s Latest Season of Horror
The AFL Evolution 2 continues with the new Season Pack 2021
America Chavez: Made In The USA #3 Review: Disappointing
SEGA has no plans to bring Lost Judgment to PC “at this time”