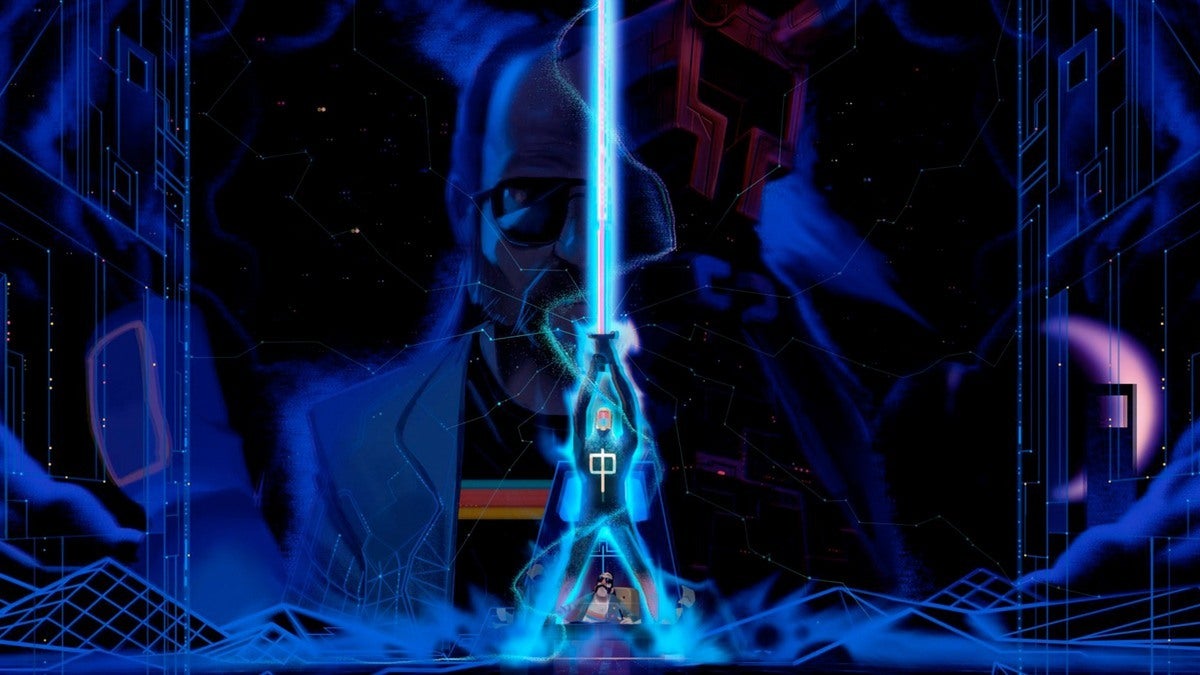 Narita Boy left me conflicted like few other games have before. Its jaw-dropping neo-retro 2D aesthetic constantly treats your eyes to beautiful ‘80s themed backdrops, wildly imaginative character designs, and wonderfully fluid animations while a truly excellent synth-wave soundtrack perfectly underscores not only the action, and the emotional moments of its story are surprisingly poignant as well. But as far as actually playing it is concerned, Narita Boy is at best serviceable, with hollow exploration filled with constant backtracking, simple puzzles, and combat that never really evolves in ways that make tougher enemies any more fun to fight. And at its worst moments… well, let’s just say that thankfully it’s only at its worst for a fraction of its six or seven-hour length, because otherwise I’d need a whole lot more aspirin.

You play as a young boy who suddenly gets dragged into a digital world after its creator, a genius hardware and software developer named Lionel Pearl, gets his memories stolen by a malicious program known as HIM. The boy assumes the role of the titular hero, “Narita Boy,” and sets out on an adventure to restore Lionel’s memories, defeat HIM, and save the digital world. However, that is a huge oversimplification of Narita Boy’s hard-to-follow overarching plot, which is bogged down with technical jargon and boring exposition dumps.

Fortunately though, that setup is not the main attraction of Narita Boy’s story. The real meat of it is communicated as you unlock Lionel’s memories and play through 13 really well-done flashback sequences that chronicle his life all the way from childhood to the present. Each time I unlocked one it felt like a gift I couldn’t wait to unwrap: these bite-sized story sequences are easily the highpoint of Narita Boy as a whole, as Lionel’s story is an emotional one to watch unfold, with wonderful music box-like tunes adeptly setting the tone. What’s especially neat about them is the way they help bring better understanding to the digital world that you’re playing through. They tie together the digital and physical worlds in a way that’s rather clever.

As far as combat goes, Narita Boy looks more impressive than it actually feels to play. There are some really great animations, hits are impactful, and the way enemies die is super satisfying to look at – but the big problem is that, at the outset, there really isn’t much to your arsenal of moves outside of a basic three-hit sword combo, close-range shotgun blast, and powerful beam attack. That’s an alright base, but none of the abilities that you gain as you progress ever make engaging with combat any more fun.

Rather than changing the way you approach a fight to keep things fresh, the techniques you unlock are more designed around giving you a way to deal with a specific new enemy type. For example, there’s a shoulder bash that’s only really used on one shielded enemy type, and an uppercut that’s primarily just used to hit the few enemies that fly. That makes them feel more like keys than actual techniques, only to be used when you see the right enemy-shaped lock. As a result, combat gets stale early on and stays that way.

Combat gets stale early on and stays that way

The one exception to this stagnancy is a dashing thrust attack that actually fits nicely into Narita Boy’s repertoire of moves as a way to hit a bunch of enemies in a row, in addition to being able to remove armor from a specific enemy. Of course, it’s one of the last techniques that you get, so I didn’t have much time to really enjoy using it in combat.

And while there are an impressive number of enemy types throughout Narita Boy, they’re almost all disappointingly simple, with a single attack and a single way for you to avoid that attack. Eventually you gain the ability to use a Wildfire power up and can toggle between red, blue, and yellow auras, which makes you deal and take more damage against enemies of the same color. But while it’s great to have an extra layer to think about in combat to break the routine of it all, it fails to make fights any more fun since you pretty much just kill enemies in one hit when you’re matched with their color.

None of this means that combat in Narita Boy is outright bad, and I wouldn’t even go as far as to say that it’s shallow, because the enemies do require that you learn their patterns, as simple as they are. It just never rises above that baseline level of what combat should be in an action platformer like this, leaving it somewhat amusing but relatively one-note the whole way through when compared to evolving games like Ori or Guacamelee.

Platforming and exploration follow the same trail limped along by Narita Boy’s combat: they never really cross that threshold of being anything better than just “fine” on a fundamental level. The world of Narita Boy may be absolutely gorgeous to look at, with visually spectacular backdrops throughout each of its three major color-coded zones, but I eventually grew numb to them; running back and forth between them over and over again, picking up and delivering keys while trying to keep track of which ones are for which locks without any sort of map drains them of their novelty after a while.

Each area of Narita Boy is capped off with a big event to transition into the next one, and usually these are among the highpoints of the whole campaign. Surfing on a floppy disc and transitioning from skidding along the water’s surface to jumping back onto solid ground is good fun, as is the power fantasy of transforming into a giant robot and utterly smashing everything in your way. But there’s one transition in Narita Boy that I need to talk about in detail, because it is the closest I’ve ever gotten to rage-quitting a game that I was assigned to review.

Upon clearing the Yellow House area you have to ride on a stag in a very familiar speeder bike-esque section that you’ve probably seen a hundred times in other games – think Bit.Trip Runner’s side-scrolling obstacle dodging, just without the rhythm element. But here you’re moving extremely fast and the obstacles that you need to jump over are just a little too hard to see. Even more frustrating is that in order to avoid taking damage from certain enemies, you have to boost through them. The problem is that when you boost you move so fast, and it pushes you so far to the right side of the screen, that it becomes practically impossible to react to whatever is coming next.

The result is a two-minute-long blurry obstacle course that largely comes down to memorization, much like that infamous Battletoads level pretty much everyone has hated since 1991. But while Battletoads has that hardcore appeal of being a difficult game all the way through, Narita Boy is otherwise a very easy game, and this awful level comes out of absolutely nowhere. It’s made worse by the fact that the mechanic meant for giving you health back, which is boosting through a string of enemies, often doesn’t work and has you still taking damage for seemingly no reason, even during a part that seems explicitly designed to let you heal. It’s headache-inducing, it doesn’t work as intended, and it almost completely ruined Narita Boy as a whole for me – but thankfully this short section is also the only moment like it.