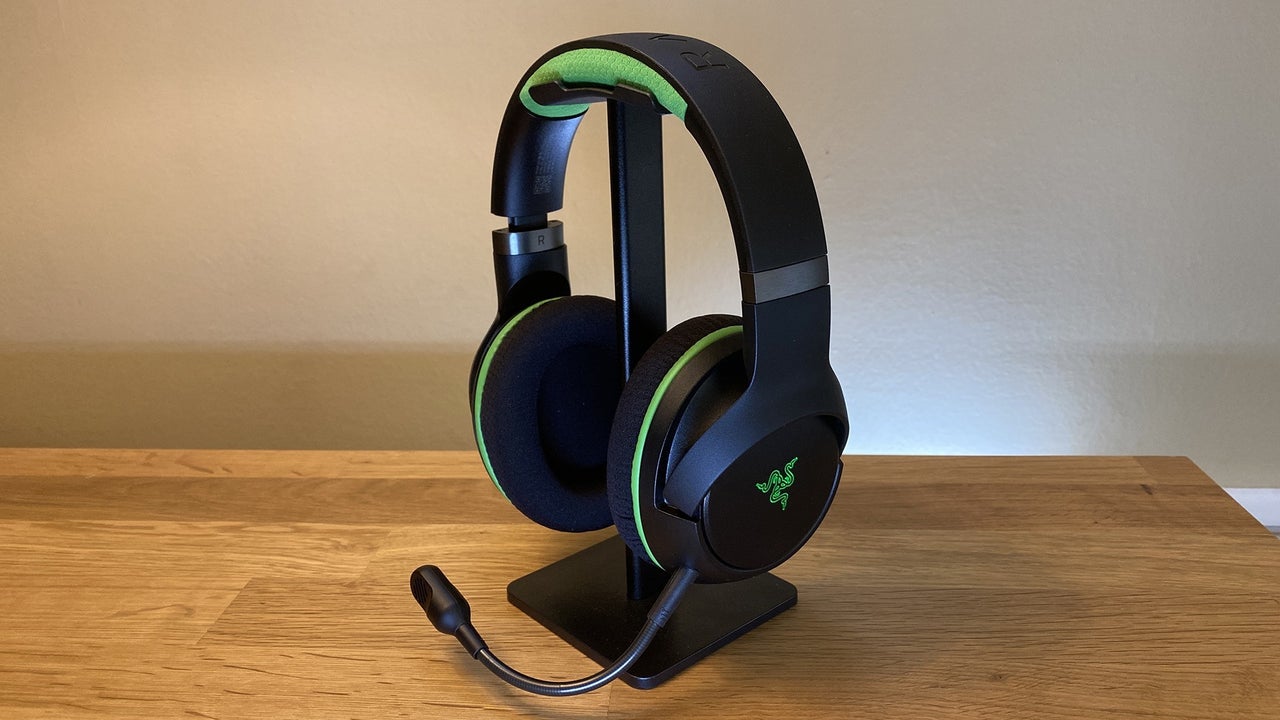 gaming headsets. Made to work with Xbox consoles, gaming PCs, and smartphones. it’s a multi-platform wireless gaming headset for the streaming age. Allowing you to quickly switch from an Xbox console to a simultaneously paired Bluetooth device, it’s the most viable console-mobile cross-platform headset I’ve tested to date. Though some of its features feel superfluous, such as the secondary mobile mic, I can see how I might use it with both consoles and phones interchangeably if streaming (and/or leaving the house) become more integral to my gaming life.Outside that specific lens, though, the Kaira Pro falters. Under ideal conditions, the sound is good, but not mind-blowing, and a laggy Bluetooth connection creates an extra hurdle for players streaming to emulate the console/PC experience on a phone. Even if its cross-compatibility seems appealing – given that most of us need to stay home as much as possible these days, that’s a big “if” – the Kaira Pro’s core competencies undercut what could be an impressive feature-set.

The Kaira Pro’s hard-edged top band and rotating forks are plastic, but the headset feels durable and well-constructed. The internal frame is also hard plastic, bolstered with a thin sheet of etched aluminum to indicate the adjustable band’s sizes. The black plastic makes its Razer green accents pop: Thin strips of green leather rim the base of the ear cups’ padding, and the padded center of the top band is coated in green mesh. There are also a pair of RGB-enabled Razer logos on the backs of the ear cups, if you want more and/or a different color.The memory foam-padded band and ear cups are covered with Razer’s proprietary Flowknit mesh, which is surprisingly comfortable. Normally, I’m not a fan of mesh padding covers – they tend to be itchy and get hot quickly. The Kaira Pro’s ear cups don’t make you sweat, even in a hot room. That said, I still prefer the feeling of leather against my scalp. Plus, at $150, this is a high-end console headset. Mesh feels like the cheap choice, so using it here seems a bit tacky.

Padding aside, the headset is quite comfortable. At 331 grams (0.73 lbs), it’s heavy enough that you won’t forget it’s there, but light enough that you won’t mind leaving it on for many hours at a time. I was also impressed with the amount of ambient outside sound the cups kept out without active noise cancelling.

Its roomy, closed cans provide plenty of space for sound to travel without boxing in your ears.

Inside the cups, the Kaira Pro features Razer’s 50mm Triforce Titanium drivers. The drivers, which the company started using earlier this year in its esports headset, the Razer Blackshark V2, supposedly allow the headset to independently tune low-, mid-, and high-frequency tones. The Kaira Pro does not have the same USB Sound Card and robust audio-enhancing software suite as the Blackshark V2, and you can hear the difference.

The Kaira Pro can connect to both Xbox consoles via the platform’s wireless protocol, as well as to PCs and phones via Bluetooth. To facilitate two sets of connections and multiple modes of play, it has a lot of on-ear switches, dials, buttons, and ports. On the back of the left cup, you have a power button, volume dial, and mic mute switch. You also have an inset USB-C charging port, for which you’ll need to use the included cable. On the right, you have two pairing buttons, one for Xbox consoles and one for Bluetooth. You also have a second dial to adjust your game-to-chat audio mix.

There’s a lot going on back there. It can be easy to mix up certain inputs, especially the two audio dials. I also found myself occasionally reaching for the power button when I was looking for either of the pairing buttons, since they’re the same size and shape.

Despite the potential for confusion, though, the processes of pairing devices and switching between Xbox and Bluetooth is simple and painless across the board. The two protocols have their own buttons, so it’s as simple as pressing the right button on the headset and either pressing the pair button on your xbox or using the Bluetooth menu on your PC or phone. Once paired, you can quickly connect and disconnect the Bluetooth device by pressing the Bluetooth button. Not only does that mean you can turn off your Xbox, press a button, and instantly get audio from your phone or PC, but that you can get audio from both devices simultaneously. It’s a pretty nice bonus if, like me, you occasionally like listening to music or podcasts while you play a game.

In front, you also have a port for the Kaira Pro’s detachable cardioid microphone. Despite Razer’s “Hyperclear” branding, I’d say it works just about as well as most wire cardioid mics I’ve tested on premium headsets in the last two years. With proper positioning, it delivers very clear, noise-free audio. Finding the sweet spot can be a little tricky, but it works acceptably well if you don’t get it perfect. In fact, it still picked up my voice quite well when deliberately moved out of position: It also picked some ambient noise, though.

Just above the wire mic, there’s a small hole to note the location of the built-in “mobile mic,” which you can use for chat when the wire mic is detached. As with LucidSound 15X, Razer included the built-in mic for players who want to use a headset with a phone for gaming and calls while traveling and would like to do so without having a mic sticking out in front of their faces. While I see the appeal – I probably wouldn’t ever use a wire mic while I’m on my commute or traveling – I also wouldn’t use a headset or play a game with chat in those situations. Meanwhile, the secondary mic’s audio quality is lower fidelity than the cardioid mic, so there’s a little edge to the sound of your voice. To its credit, the built-in mic picks up less ambient noise than many others I’ve used on gaming headsets and wireless headphones. I still wouldn’t recommend it, but the mic would be fine in a pinch if you find a quiet spot.

On Xbox consoles, you can customize the Kaira Pro’s audio features and RGB lighting using the Razer Headset Setup for Xbox app. (You can also download this app on PC through the Microsoft store). The app gives you access to a relatively substantial amount of audio customization, including EQ levels for the speakers and cardioid microphone. You also have access to a limited number of RGB lighting customization, though it’s not as fleshed out as the full Razer Chroma suite for PC peripherals.

The app is quick to navigate and easy to use. Each of the audio-related menus features a test button that turns on mic monitoring so you can hear changes to your levels as you switch presets or tinker with custom levels. You can create multiple headset profiles, which include audio and lighting, so you can make custom EQ arrangements for different games and scenarios.

It’s been generally heartening to see manufacturers making configuration apps for Xbox and giving console players the ability to customize their gear as PC players have been for some time. Though those options are limited for many devices, including the Kaira Pro, they do make console headsets more viable for power-users. With headsets specifically, having more control over speaker and microphone audio makes the headset more viable for competitive play and streaming.

The Kaira Pro sounds decent most of the time across all of the devices we tested, including Xbox Series X, Xbox One, PC, and when synced to your phone. Though the headset can be tuned any way you like, it delivers a very mid-heavy sound that seemed better suited to watching The Mandalorian on Disney+ and listening to podcasts than an immersive gaming experience. Some games, like Gears 5 and Call of Duty: Black Ops Cold War also sounded a little flat. These are small issues in the larger scheme of things, and can be fixed on Xbox and PC by adjusting EQ settings. Under ideal conditions, everything comes through clean and clear, with the nuance you’d expect from a mid-tier headset. Even with tuning, it isn’t the richest sound I’ve gotten out of a headset, but it sounds good and feels like an upgrade over standard TV speakers.

On Xbox Consoles and Windows, the Kaira Pro supports virtual surround sound and positional audio via Windows Sonic. You can also use Dolby Atmos if you download and pay for Dolby Access. These standards work fairly consistently across devices: Windows Sonic does a solid job giving in-game sounds, such as footsteps, directionality, but positional sounds come through louder than music or background noise. With the Kaira Pro, the poor mix didn’t lead to reduced audio fidelity, as it has on other headsets. That said, I still strongly prefer the Dolby Atmos experience. If you have Access, it gives you both a strong sense of place and enhances the quality of the sound overall.

When you pivot to a second device using Bluetooth, the Kaira Pro’s performance drops the ball. Though the audio quality on the phone is comparable to the console experience, playing games over Bluetooth introduces a small but significant amount of audio lag on phones and PC. You won’t notice it when listening to music or watching movies, but it becomes much more noticeable in a game, where you listen for audio cues to sync with inputs.

In games with precise timing and/or that rely on audio cues, the lag can be jarring, but doesn’t make the game harder to play. In Black Ops Cold War on PC, there was a clear gap between the moment when I fired my gun and when I started to hear the sound of it firing. Streaming Gears 5 multiplayer to an Android phone via XCloud, the difference between input and sound on the Kaira Pro (versus the phone’s speakers) was smaller than on PC, but still noticeable. I still won a match and made MVP, so the poor performance didn’t slow me down.

In single-player games, like Ori and The Will of The Wisps played via Xbox Cloud Streaming, the lag was still present, but small enough that it didn’t impact my ability to play. Similarly, non-streaming, single-player games on iOS like Holedown and Roundguard had a small amount of lag, but I only noticed because I was looking for it.

The Kaira Pro gets very good battery life when connected via both Xbox wireless connection and Bluetooth, though it may not seem so impressive if you’re an RGB fan. According to Razer, the headset lasts up to 15 hours on a single charge with the RGB lighting on, and up to 20 hours with it off. In anecdotal daily testing, I found that the headset lasts about 3-5 days between charging with the lights on. Mind you, that’s with fairly stringent power-saving features.

The Razer Kaira Pro Xbox wireless headset is available now for $149.99 through Razer’s digital store and retailers, including Amazon and GameStop.