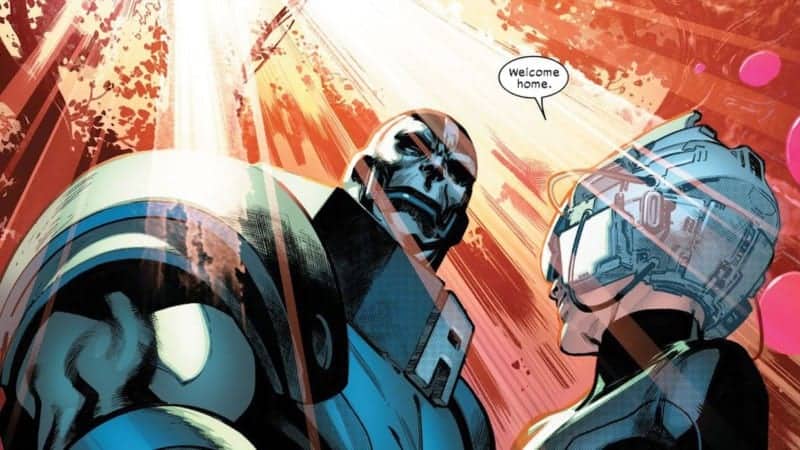 In this third installment to the new podcast, Ian, Nolan, and Marius get into the nitty-gritty. They finish last week’s discussion of events to come by looking at several issue covers for March. Then they go issue-by-issue through this year’s 6 issues as of 1/14. With FALLEN ANGELS published early, and with more to say about X-MEN #4 and MARAUDERS #5, they have a lot to talk about.

On this topic our trio makes predictions, some faulty and some sound, and some even the three of them can’t agree on. Mostly they pick up where they left off wondering about characters left out of our Krakoan story. They’re happy to see Pixie involved, and to see Sabretooth out of earth-jail. Ian tells the other two hosts what the name of that little Brood guy is and what run he comes from.

Comics from the First Half of January

The gang starts by offering fulsome praise to NEW MUTANTS #5. This issue saw a return to the younglings in space and to Hickman’s penmanship. Returning to Ian’s bold assertion in episode 2 that Magneto declared war on capitalism, the trio goes into more detail about Magneto’s speech from X-MEN #4. Apocalypse and his responsibility for the Bronze Age Collapse serve as a jumping-off point for transitioning to EXCALIBUR #5. (Ian also explains to the gang what and when the Bronze Age Collapse was.)

From EXCALIBUR they move on to MARAUDERS #5. Here they largely left Sebastian Shaw out of previous discussion, so he is a focus. Marius also recommends some background reading on Christian Frost. Finally, on FALLEN ANGELS #5 and X-FORCE #5 they agree that these issues have excellent art. They disagree, on the other hand, about whether FALLEN ANGELS deserves its upcoming cancellation, and about X-FORCE’s natural place in the rankings.

Whether FALLEN ANGELS deserves to be cancelled or not, Marius and Kitty Pryde both deserve it, as you’ll hear in the episode.