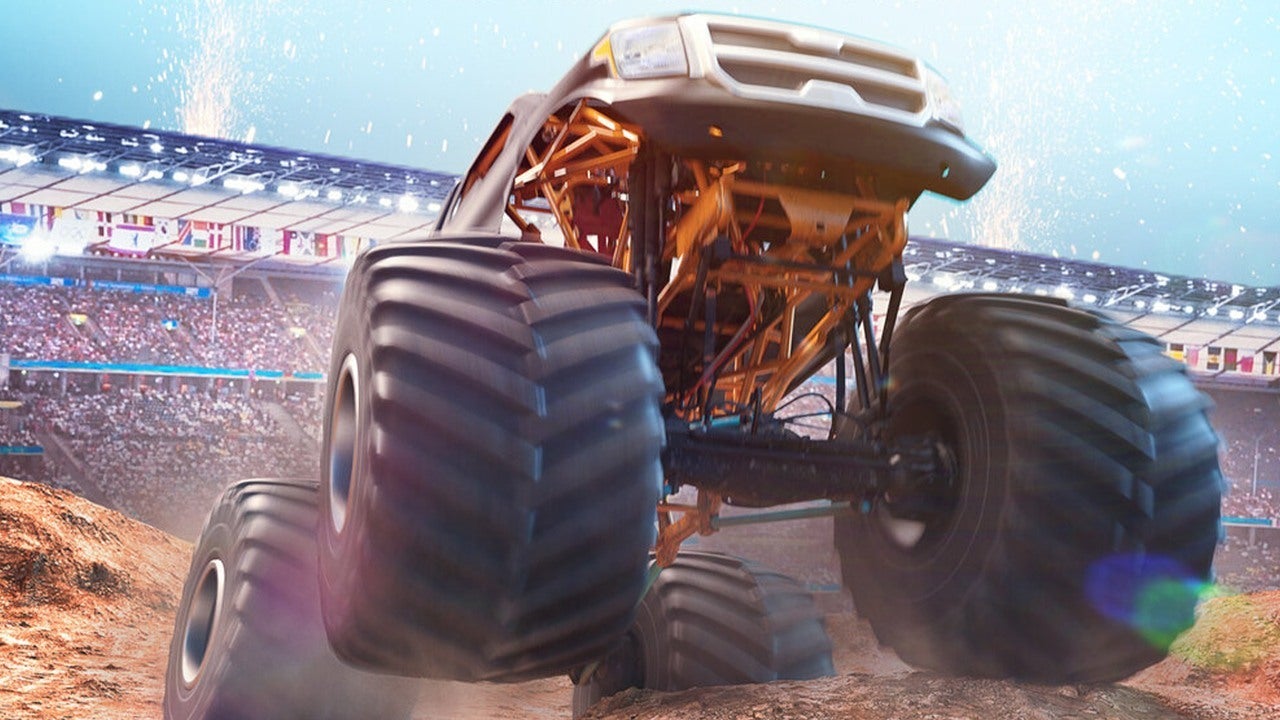 Monster Truck Championship does a decent job of capturing this world – or, at least, an unlicensed, off-brand facsimile of it. The graphics are pretty rough at times and it’s lean on content, but Monster Truck Championship successfully fuses the over-the-top madness of monster trucks with an accessible, simulation-style approach that makes both the driving experience and pulling off wild stunts quite satisfying.The first and most crucial piece of the puzzle in any racing game is the handling, and the good news is that it’s actually really good here. Teyon – the Polish team behind 2019’s Terminator: Resistance and 2014’s Rambo: The Video Game – has done well despite a distinct lack of racing games in its back catalogue. The trucks have an excellent sense of bulk, particularly as they squat back on three wheels during drifts, or slap off the ground after landing from huge air.

The trucks have an excellent sense of bulk, particularly as they squat back on three wheels during drifts.

The independent rear-wheel steering – controlled by the right stick – also adds a whole new dimension to the driving, and it’s essential to master it. It’s not just crucial to get your immense truck to make tight turns and perform aggressive donuts, it’s equally handy as a way to reduce the angle of a sketchy drift, or hastily correct a bad landing. The fact that these vehicles are so unlike the light, low, and nimble racing cars that star in most other motorsport sims makes for a fun and interesting change of pace.

If you miss this you’d better be dead, or in jail

If Monster Truck Championship resembles any other contemporary racing game, it’d be Wreckfest – although not simply because destruction derbies and monster truck rallies share the same sort of spiritual link with Anytown, USA. It’s actually more superficial than that; in fact, scrolling through the menus I’d forgive you for assuming the two games shared a publisher. But they don’t and, as such, the general presentation is a little too derivative.Progression is pretty plain, as well. Monster Truck Championship spreads its action across three championship tiers, each featuring 10 main events. Unfortunately, there’s not really any difference in the pomp and pageantry associated with any of the leagues; it’s all packed crowds, fireworks, and major stadiums from your debut event. Running events in the “Major League” doesn’t really feel any different from your initial events in the ostensibly entry-level “National League”, especially when you’re returning to the same cities and competing on the same courses. The atmosphere of these major stadium spectaculars may have been more impressive if I’d started my career wowing more modest crowds in small-town showgrounds or local fairs. As it stands, it’s all a bit one-note.

And if you’re in jail, break out

Monster Truck Championship features two types of racing – conventional circuit racing, and drag racing. The racing is fine but it gets a little clumsy when the trucks are too close to each other and a little boring when they’re too spread out. It’s also hampered by utterly broken timing; it’s never clear how far in front you are because the times fluctuate seemingly at random. The drag racing is probably my pick here. They’re not simple, straight-line dashes; rather, they’re tricky and technical 10-to 15-second sprints against an opponent tackling a separate albeit mirrored version of the same course. Drag racing rewards quick reaction times and skilful truck control and I found it quite addictive.

The other events are destruction, which is pretty self-explanatory, and freestyle, which is classic, stunt-centric monster truck mayhem and the highlight of the game for me. This is where Monster Truck Championship becomes Tony Hawk’s Pro Skater in a truck, and the amount of different stunts and combos you can execute is surprisingly robust. Somersaults, backflips, wheelies – all kinds of wild stunts are accommodated by the physics here.

There’s a surprising amount of scenery pop-in on the race tracks and the dirt and dust effects aren’t going to knock any socks off in 2020.

Just know that it’s not especially pretty – there’s a surprising amount of scenery pop-in on the race tracks and the dirt and dust effects aren’t going to knock any socks off in 2020. Truck detail is largely fine, although the entirely static flags are a dud inclusion – they look quite awful frozen rigid as your truck blazes around the arenas. There’s a decent array of truck bodies but only really a handful of pre-set monikers and themes, which is a shame considering there’s no editor to give your truck a custom name.

The Greatest Racing Games Ever