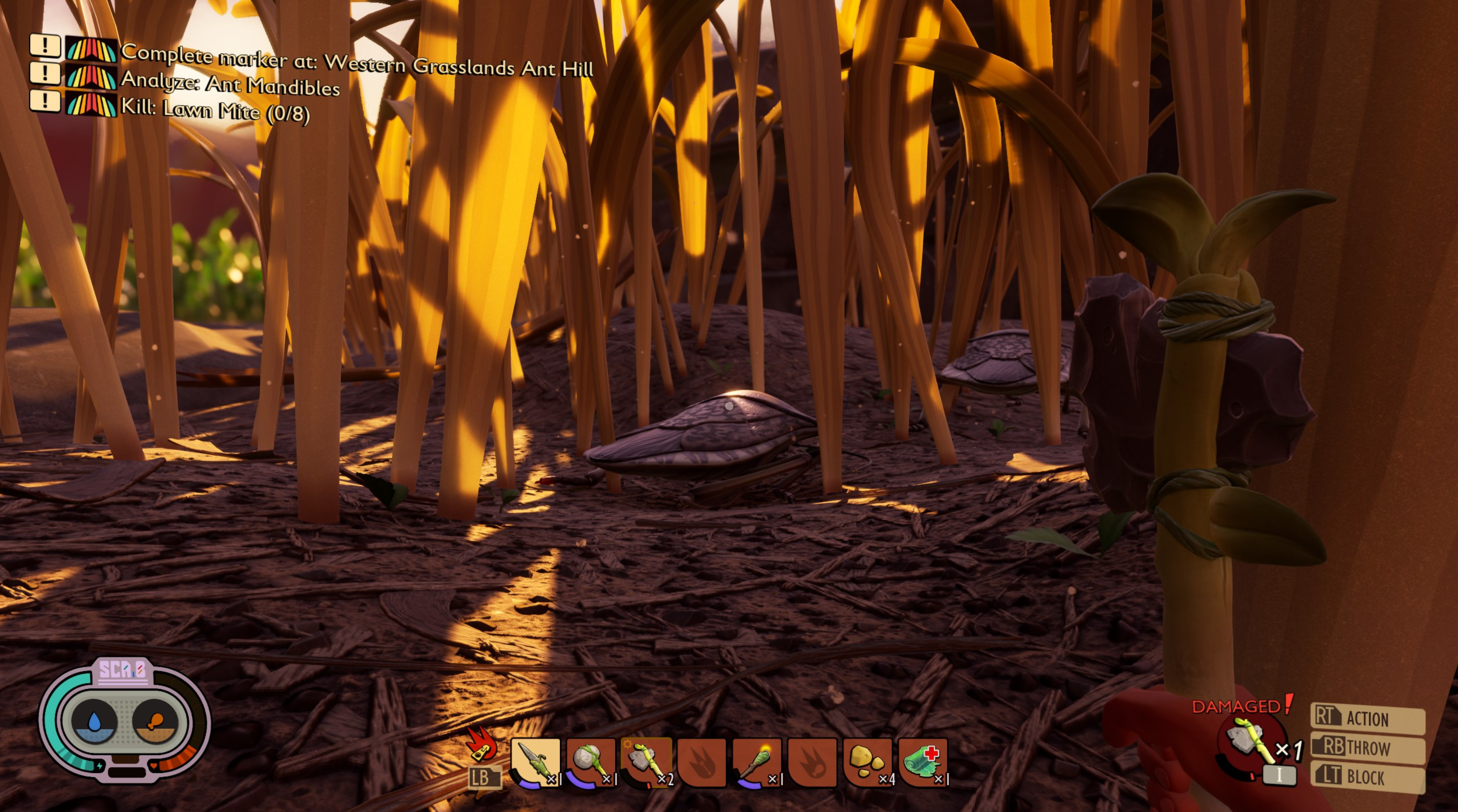 The ground is shaking, dust is kicking up, and the spires atop the grass forest ahead are bending under the weight of some behemoth. I have an axe made of stone and a belly full of regret.

I keep my eyes trained on the swaying green blades that stretch into the blue sky like slender trees. At the base of the forest, breaking through a cloud of smoke and accompanied by the pounding of footsteps, the terrible creature finally emerges. It’s a ladybird.

Grounded is the latest game from Obsidian, developer of some of the best RPGs ever made. Except this isn’t an RPG at all. It’s a survival game like Ark: Survival Evolved, but instead of battering dinosaurs you’re crapping your pants because ladybirds are scary when you’re the size of an ant.

It’s Honey, I Shrunk the Kids: The Game, if that movie had a ten hour scene where the kids chopped down 500 blades of grass to build an organic fort.

It’s out now in Early Access and has the promise of a good game in it. Like Subnautica and Ark, it’s launched barebones and only has enough story content to keep you going an hour, but it gives a good taste of the kind of top shelf survival game this could end up being. Still, it’s one of those games – you know the ones – and your tolerance for those will dictate how much you love it.

I generally don’t get on with this genre, but I have about 80 hours in Subnautica. There’s something about that setting that just does it for me – the alien intrigue and mysterious story that pulls you through. For a game that’s essentially a 100 hour underwater level, it’s a hell of an achievement. My point is, I like my survival games with a clear objective. Grounded only has a tiny bit of story content its current state, then you’re left to your own devices and it dries up like an ant under a magnifying glass. 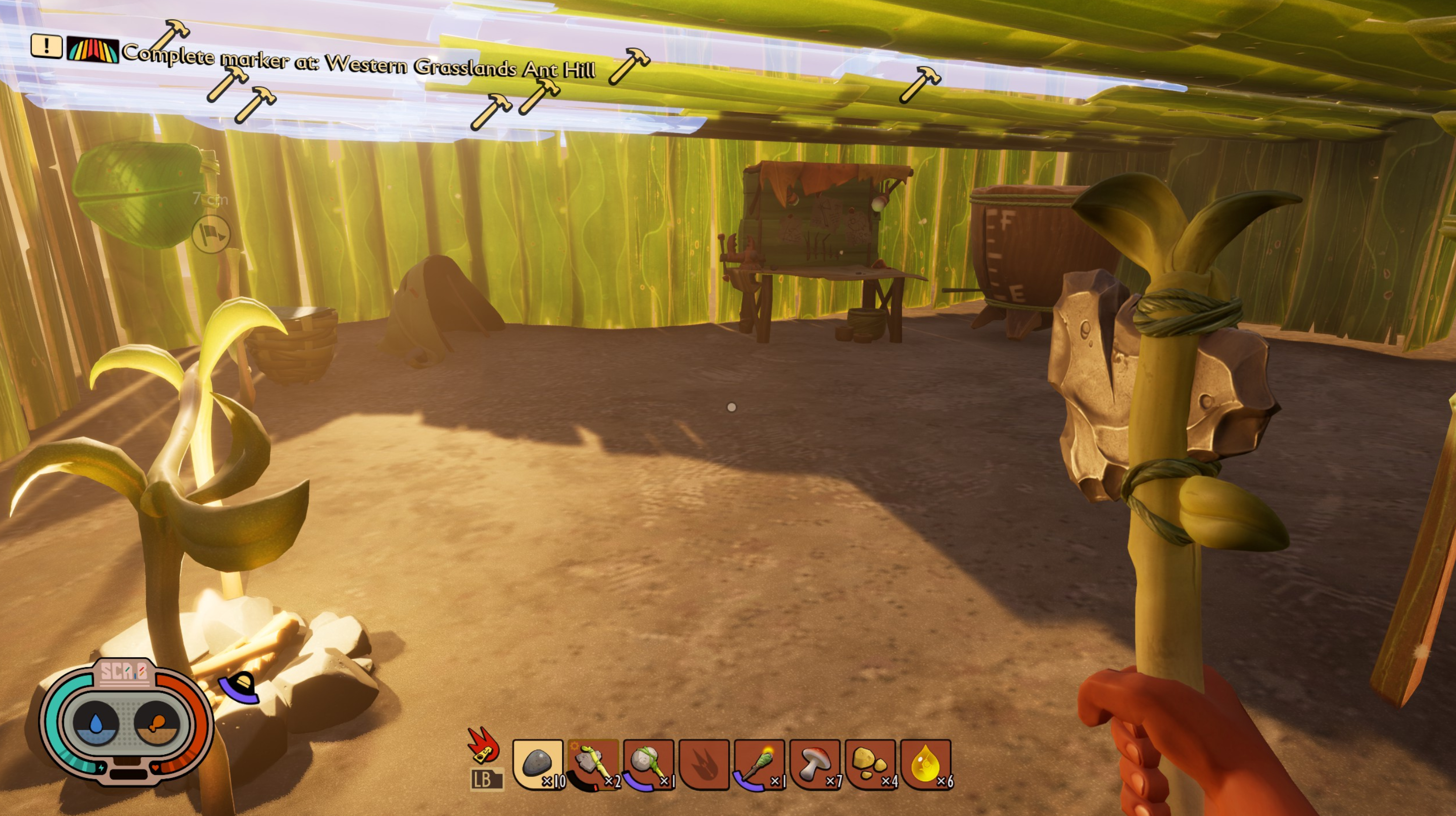 It opens with you figuring out how the world works and how to keep yourself alive. Seek out globs of water for a fresh drinking source, perhaps gobbling down a bead hanging from the grass canopy above. Eat raw mushrooms for health and work your way up to a campfire so you can cook up some bug meat. Craft an axe to chop grass, a hammer to break up acorns, a spear to fight, and a torch to explore insect nests.

Your first main objective is to fix a machine, then you’re set on a path towards a great oak tree to find an underground lab with a friendly robot who hands out daily tasks. Once I had that down, I spent an absurd amount of time building a simple base with its back to a lake. A defensive position, you see. Just in case the friendly ants get that look in their eyes.

To build, you need supplies – chunks of grass and weed – that you have to manually carry from the grasslands back to base, five parts at a time. Playing on your own, it’s a slog. Especially when you’re me (an idiot) and you build your base a whopping 300cm from the grasslands. Saying that, something compelled me to keep going. It’s a monotonous task, but it nails that base building compulsion where you just have to see your structures through, even when you’re playing on your own and there’s nobody to flex at. I’m sure Grounded is much more fun in co-op. 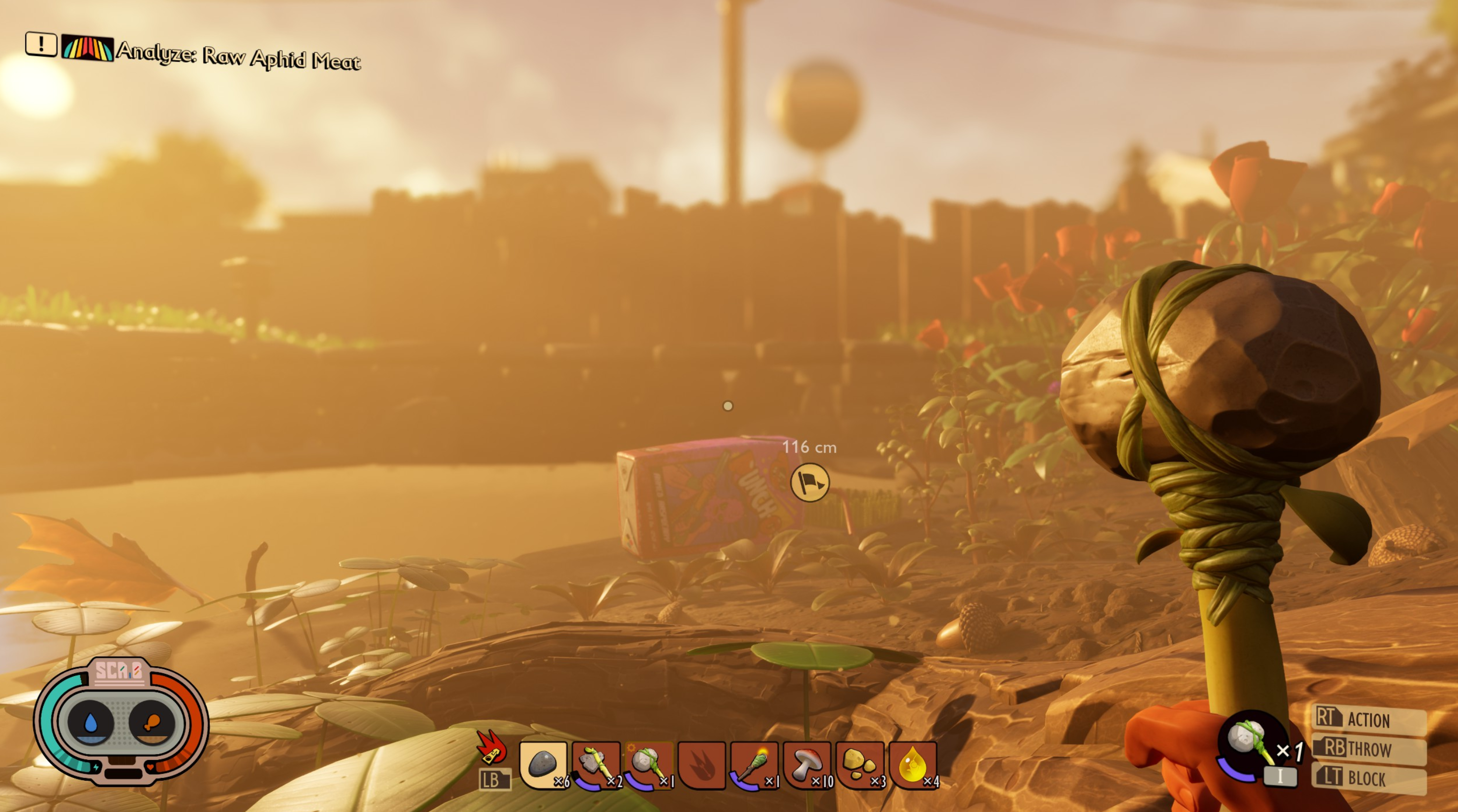 I also want to give a shoutout to the spiders, who can frankly fuck off. I don’t mind spiders in real life, but these horrible bastards sprint up to you and end your life in a second. I hate them. The game features an arachnophobia setting that changes their look, but it’s only cosmetic so they will still be awful. Like my nan always said, “There’s no cure for being a cunt”. You have to hand it to Obsidian though – the artists, animators, and sound team really captured how pant-wettingly scary spiders must be for smaller creatures.

That goes for the rest of the game’s visual design, too. It’s such a good concept and the execution is excellent. Discarded drink cans become hulking landmarks. Depth of field is used to accentuate how vast everything is, the horizon blurring out of view as pebbles transform into boulders. But once the novelty of that setting fades, you start seeing it as a series of mechanical tasks: get more grass, build that wall, maybe make a second floor, get more grass. I felt like I needed a reason to keep going, which I’m sure Obsidian will add as the game’s story develops over the Early Access period. There’s a lot of promise here and I’ll definitely come back to it in a year when it’s grown up a bit.