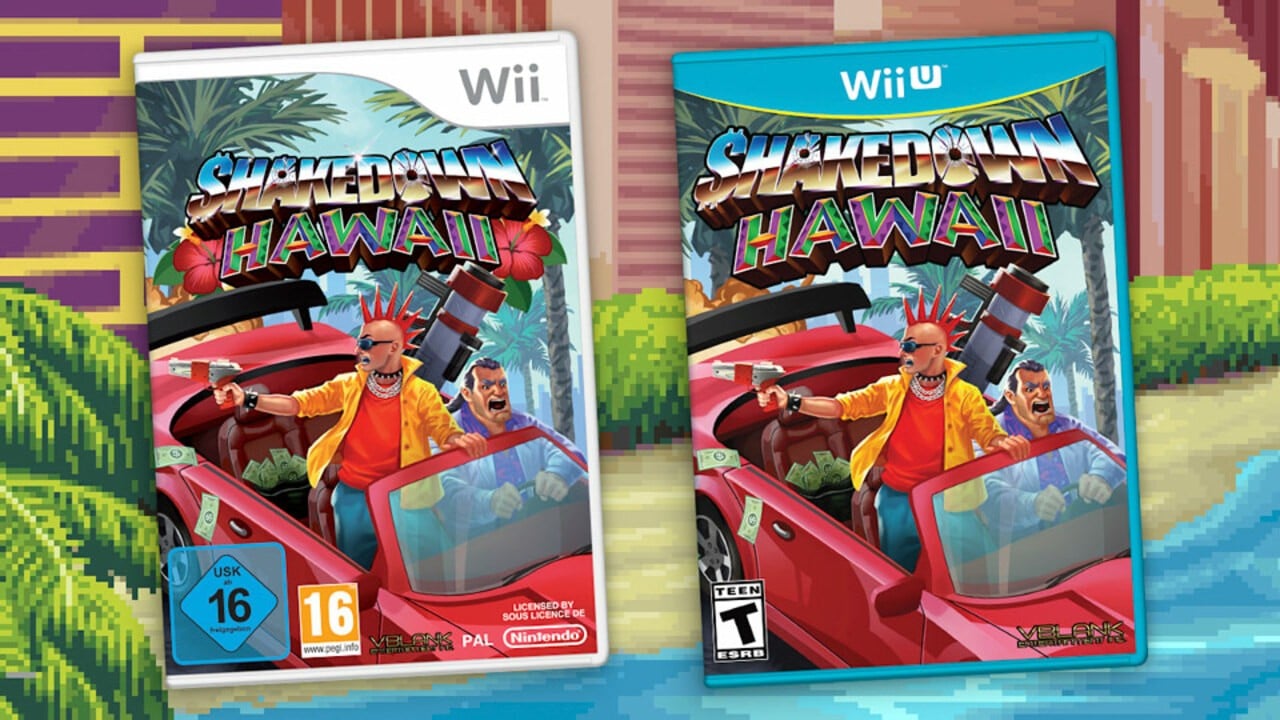 Vblank Entertainment is bringing physical versions of Shakedown: Hawaii to the Wii and Wii U this summer. Yes, you read that correctly.

Originally released on the 3DS and Switch, the game will include all of the latest updates, including The Mogul Update, the Full Tank Update and “many other little tweaks, improvements and optimizations that went into the game post-launch.”

The Wii version will come with both 50hz and 60hz, as well as both NTSC and PAL output. Control-wise, it supports the Wii Remote, Wii Classic Controller, Wii Classic Controller Pro, and GameCube Controller. Thanks to clever optimisation, the entire game fits into the Wii’s system memory, so you won’t experience any load times once the game boots up. The catch? The game will only work on European Wii consoles (we’ll come to the reason why in a second).

Actually releasing a game on the Wii in 2020 is harder than you might imagine, as Vblank’s Brian Provinciano explains:

Although we’ve still seen some Wii releases over the past few years, seeing one more wasn’t a given. Indeed, despite my best efforts, it just wasn’t in cards anymore, at least, not for North America. However, rather than giving up, I decided to reach out to Nintendo of Europe as well, and to my surprise, they said yes, and allowed it to squeeze through before that door closed too. Words truly can’t express how appreciative I am, and I can’t thank them enough for all the heavy lifting they did on their end to make it a reality. It’s meant the world to me, and these Wii discs specifically hold an immense place in my heart.

As incredibly as it all worked out, unfortunately, Wii discs aren’t region-free, and I didn’t want North American players to be left out. Although I continued talks with NOA, floating around a Plan B, Plan C… Plan Z, sadly, every idea hit a wall. The clock was ticking, and after exhausting all other options, I decided to pivot to the next best thing: the Wii U. After all, the Wii U still supported Wii Remotes, Wii Classic Controllers, and even 4:3! So, I rushed against time to port Shakedown: Hawaii to Wii U as well, and get it through certification before that door could close too. To give it the best chance of getting greenlit under such a tight timeframe, I had to work fast. I needed to present it to Nintendo as close to tied-in-a-bow and ready-to-release as possible… and as soon as possible. Needless to say, it all worked out too. Even with the tight schedule, I couldn’t be happier with the final result, and was still able to give it some nice Wii U finishing touches.

I want to thank everyone at Nintendo for all the support, and everyone there who helped make these possible. To the lotcheck teams, thank you, thank you!

The Wii version will be available for purchase online on Thursday, July 9th at 10am PT / 1pm ET / 6pm UK for $29.99 USD, and is limited to just 3,000 copies; Vblank suggests that interested parties subscribe to email notifications to avoid missing out. The Wii U version will follow in August.