It is a truth, universally acknowledged, that any veteran of BioWare who has been there in excess of a decade, must be in want of their own indie studio. Bad Blood Studios is one such independent venture, set up by a former BW art director named Hayden Duvall, and Old Gods Rising is its first game. It’s a creepy (if not outright horrific) first-person mystery set in a deserted university, with Lovecraftian elements. And if I can stretch the definition, it is probably the best Lovecraftian game I have played.

I think this is because Old Gods Rising feels like the starting principle was “how can I make a good game?” rather than “how can I gamify my favourite weirdo author?”. But if you want a Lovecraft game where you’re wading around in tentacles and uncomfortable metaphors, you will be disappointed. There aren’t none tentacles in Old Gods Rising, but despite the very Lovecraft-y name, the game is mostly about whether you believe the tentacles actually exist or not. 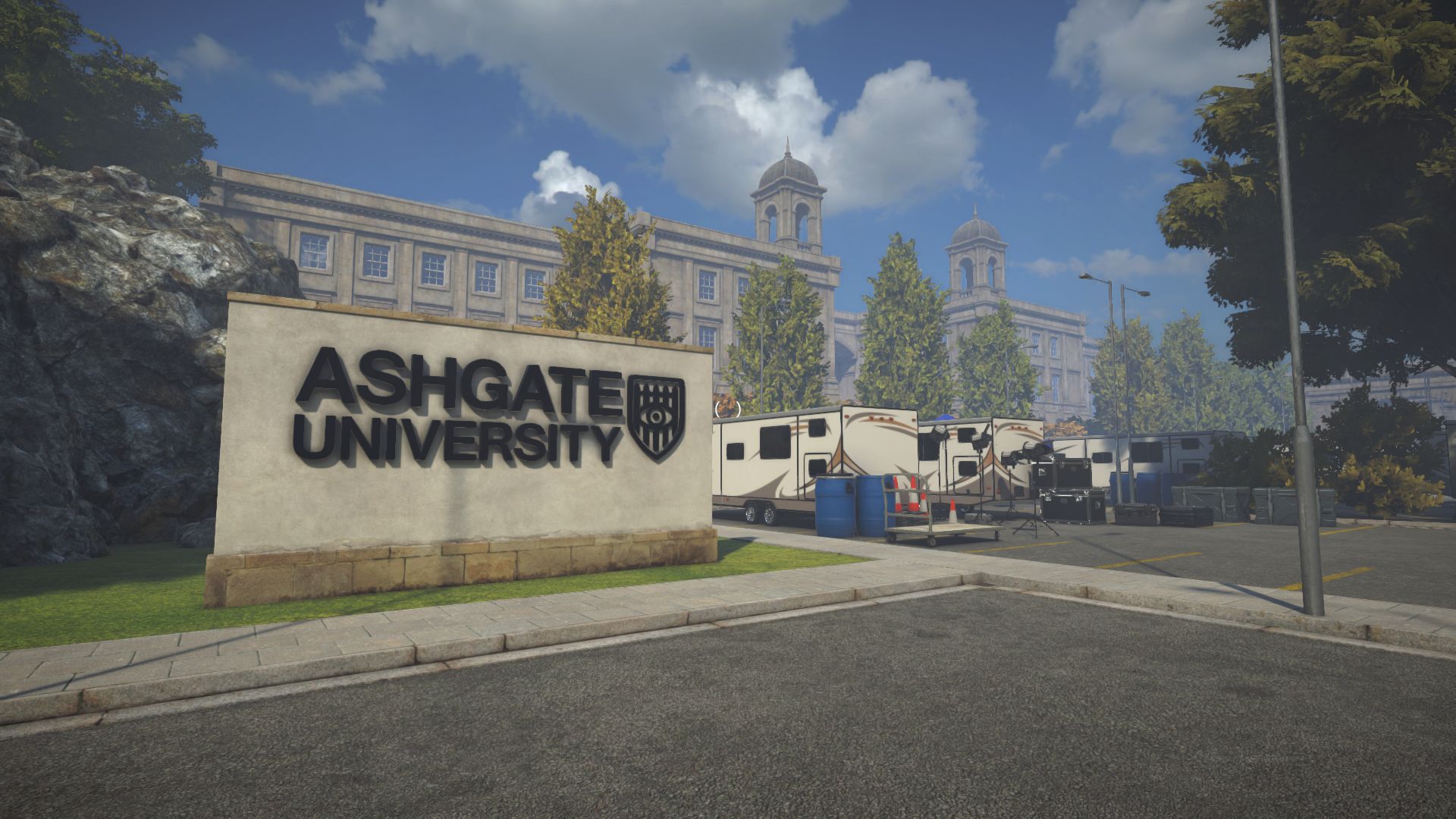 The trailer makes it seem a bit rubbish. It is not, which is why I have written this, but the premise sets its stall out simply enough. You play as Tom Winston, a professor specialising in ancient British history and one of those lads who gets a show on the BBC where they wave their arms around whilst standing on the remains of a motte-and-bailey. Unfortunately, Tom is currently disgraced after publishing a book making huge claims based on historical evidence that turned out to be totally spurious. Luckily for Tom, eccentric horror director Maz Kayfer is filming on location at a middling-standard UK university, and wants Tom to be the historical consultant. No prizes for guessing what the name of Maz’s new film is called.

History of the mind
Whenever Tom reads some ancient runes or makes an assessment of a historical site for Maz, key words appear and float in mid air, like a kind of academic version of the mind palace scene from Sherlock. It is a bit naff and I’m not sure what purpose it really serves, apart from highlighting the ancient carvings in the rock so you (the player) can see them as well as Henry, and go “Oh, yes, them’s proper ancient.”

So, you chip up at Ashgate University one sunny morning, and find it deserted. The absence of students and staff is explained by it being the summer holidays; the lack of cast or crew is more unsettling. There’s no signal, but red phone boxes are plentiful, so you can check in with your girlfriend Lex, or even call other people if you find their numbers on posters. Maz isn’t there either, but you find a walkie-talkie so you can speak to him. He is apparently stuck in a separate location just outside the university. He instructs you to check out a few locations by yourself, and assures you that his crew are there somewhere. 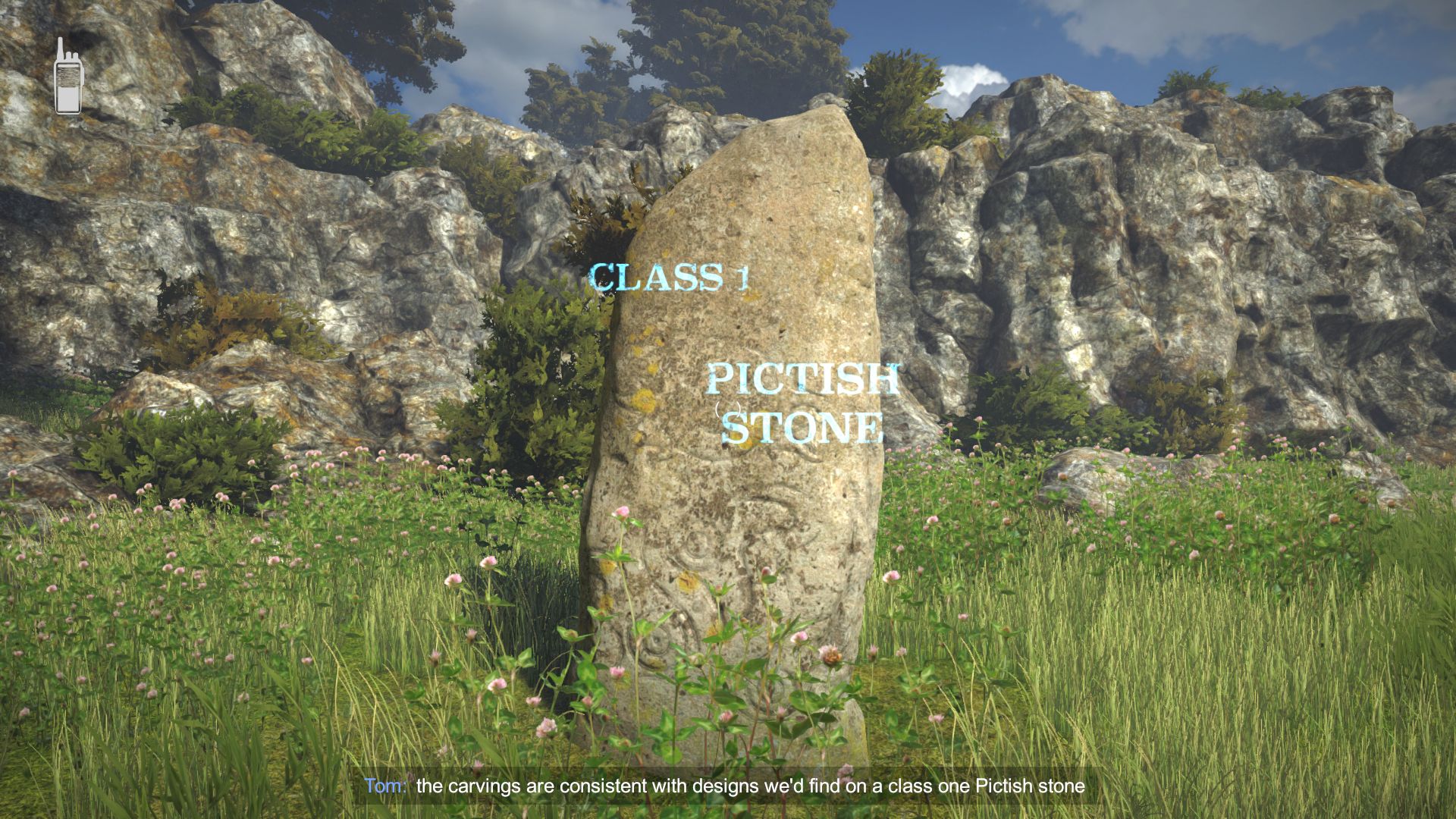 Your interactions with the environment are minimal – you are mostly there to observe, after all – so you wander around the Ashgate campus, occasionally getting stuck on edges, and stare at the old rocks Maz asks you to stare at. Sometimes they have a gentle puzzle attached, but nothing too taxing. I did very much appreciate the attention to detail in the design of the uni, which is very well observed and full of weird sculptures (often referencing video games). It has loads of notice boards everywhere, with posters advertising an “ultra v party and Korean BBQ”, a yoga class, and the performance of a new student play called “Searchin’ for an Urchin”. If you call the Student Union number you get an answerphone message saying they’re gone for the holidays, and also unfortunately they can no longer participate in the Ilchester Cheese Festival. It is all gloriously normal.

Except, very early on, you find weird stuff. You end up hearing a woman calling for help in some drainage tunnels, and though you can’t find her, you do find a massive warren of underground catacombs. There’s a weird load of eldritch machinery that generates blue glowing gifs, pits emitting mysterious growling noises, and still no sign of the crew anywhere despite all the trailers and equipment. Ashgate is built on a weird collection of rocks and ruins, with big stone arches that look suspiciously unnatural. Sometimes you encounter clouds of choking gas. 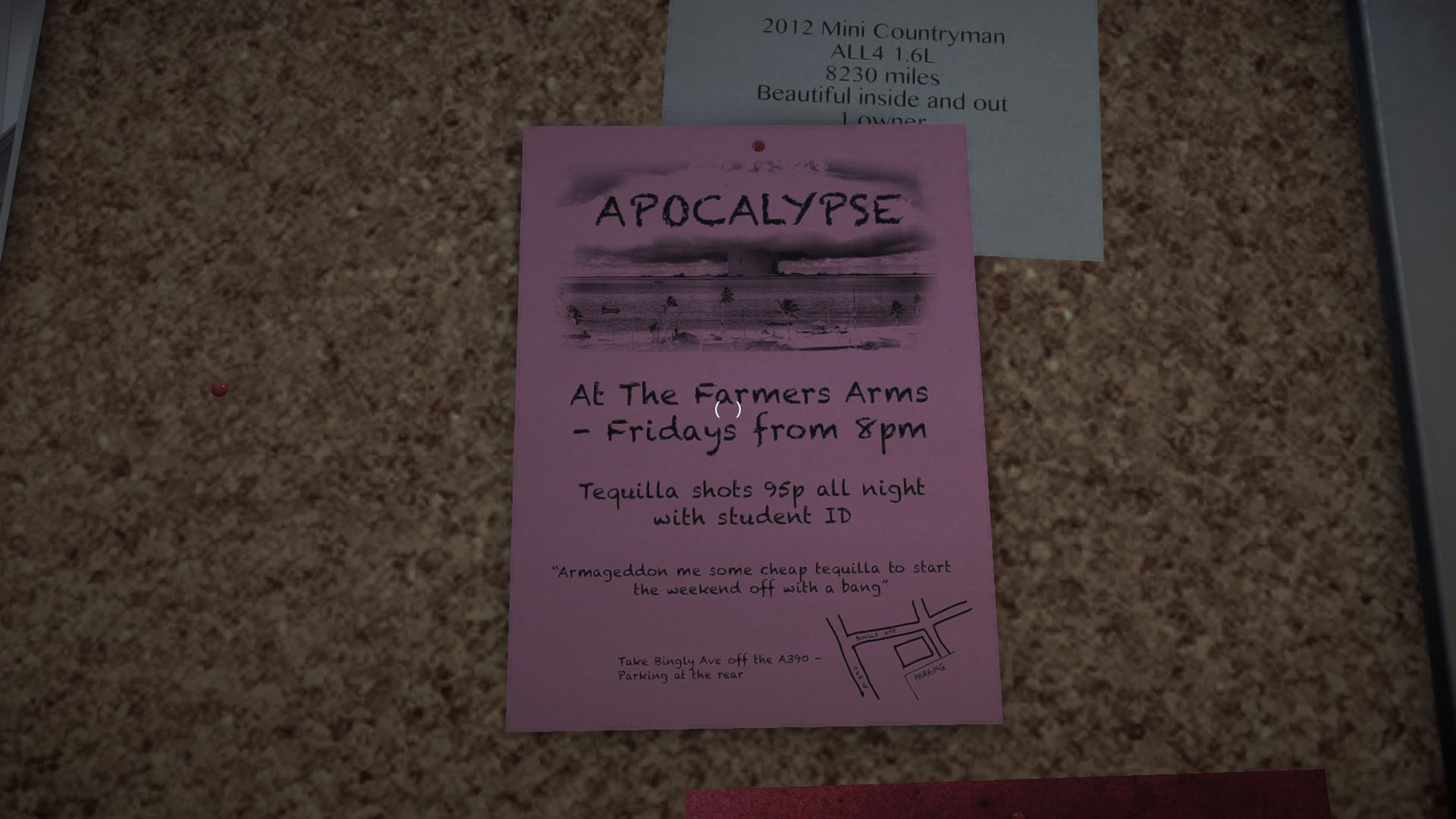 My university had a thing called Drink The Badger Dry where at the end of term the small bar in one of the halls flogged all its booze for cheap. It was… awful.

Except then, after the first weird occurrence, your girlfriend tells you that Maz has been sued several times for his film making techniques. He is apparently fond of the ol’ candid camera set up, filming unwilling participants in the scares to get genuine responses from them. She reckons that he’s pegged you as perfectly straddling the line between expert and credulous, and are not the consultant, but the star of his new movie.

If you explore in corners, further than where Maz tells you to go, you can find clues. Hidden monitors looping through camera feeds. The empty office of a missing professor. A clipboard noting staff positions. There’s more, but I don’t want to spoil it. Some of the phone calls you can make reveal things too. You might spot a high-vis vest disappearing around a balcony corner. But everything you discover is carefully crafted so it could be explained with both solutions: either it’s all a trick to freak you out, or it’s all real and the Old Gods really are Rising. Tom doesn’t make definitive statements either way, offering, perhaps, a murmured neutral comment, so you have to make up your own mind. It’s very, very well done. 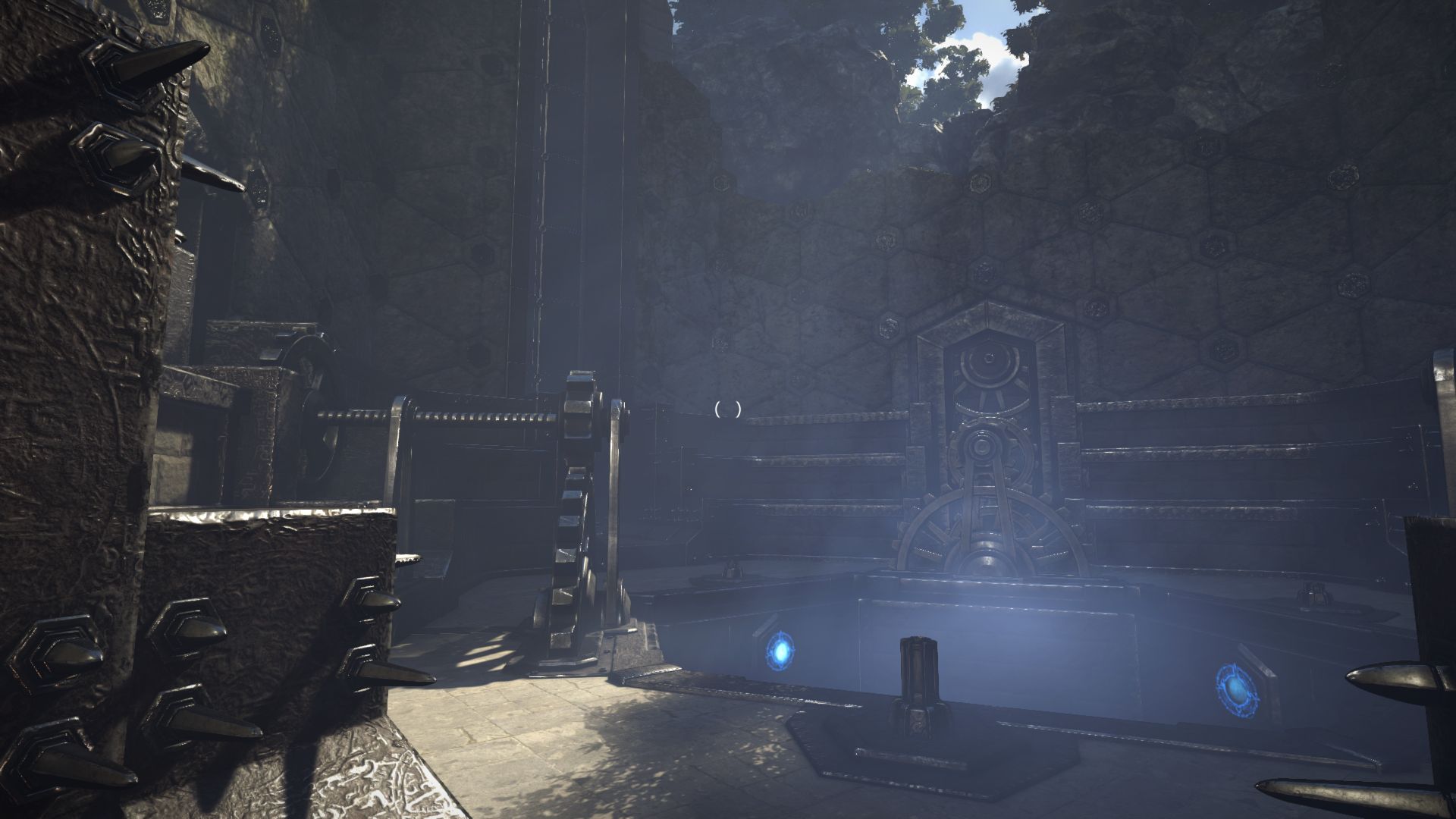 Behind every man
The voice acting is the only bit Duvall didn’t do in Old Gods Rising. I did enjoy most all of the cast, who give you the warm feeling that you’re listening to a Radio 4 adaptation of Dickens, but a special shout out goes to Lex, Tom’s girlfriend. Her voice on the other end of the phone is so very reassuring, and she feels like a solid link to normality.

Tom is a bit too nonchalant about everything in his voice acting. I know he’s supposed to not give his feelings away, but I can still startle my boyfriend by walking out of the toilet too quietly even though I’m not a squid-faced monster trying to kill him. Old Gods Rising isn’t a jump scare a minute, but some of the things Tom encounters would elicit at least an ‘Argh!’ from most people. If he got any more insouciant I’d be recommending he see a doctor. Similarly Maz is possibly a bit too hammy. You can practically hear the cigar stuffed in one corner of his mouth… but then a caricature of an ageing Hollywood director is just what would lure you into a false sense of security!

That’s the thing. It made me so paranoid that I second guessed everything I thought about the game. It’s a shame that the ending, when it happens, is a bit abrupt, but even after it ended I couldn’t decide what had happened. It’s only a couple of hours long, but Old Gods Rising stewed me in my own juices so thoroughly that I woke up, confused, at about 2am, looked at my aforementioned boyfriend as he slept, and thought “he was definitely in on it with Maz… he looks too smug”. That’s got to be a well crafted story, hasn’t it? As long as you don’t mind not having all the answers at the end.