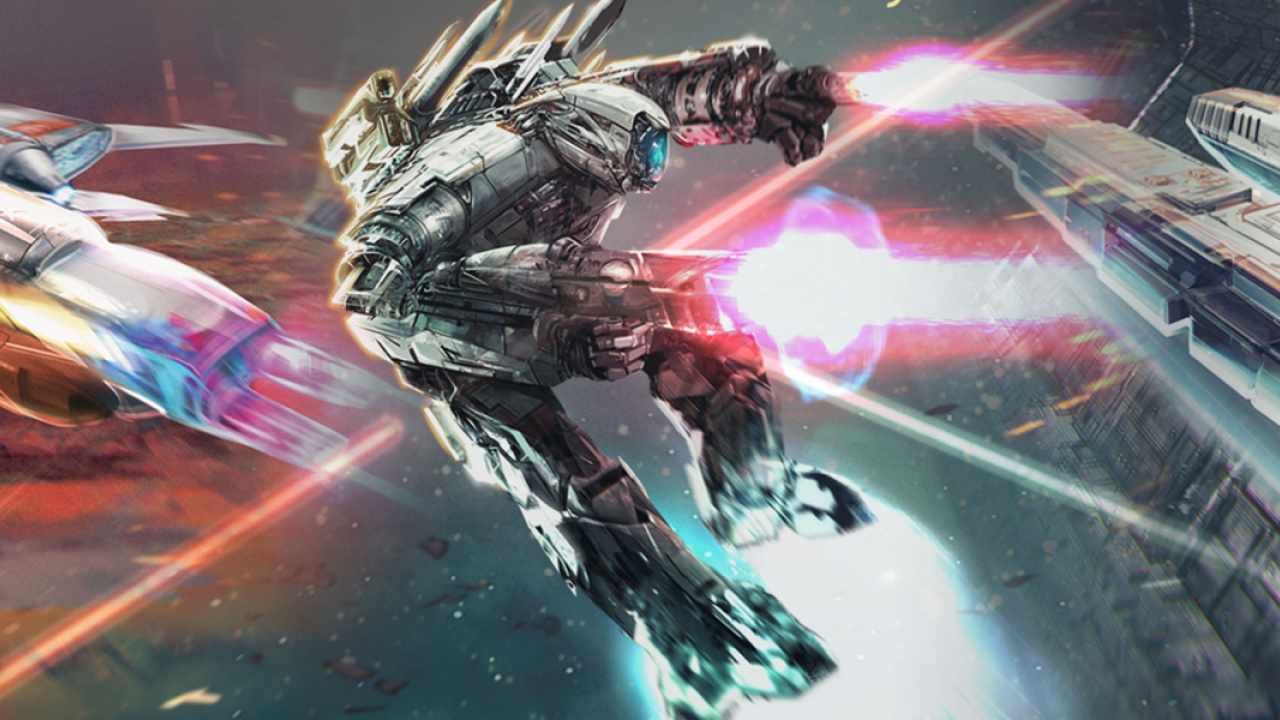 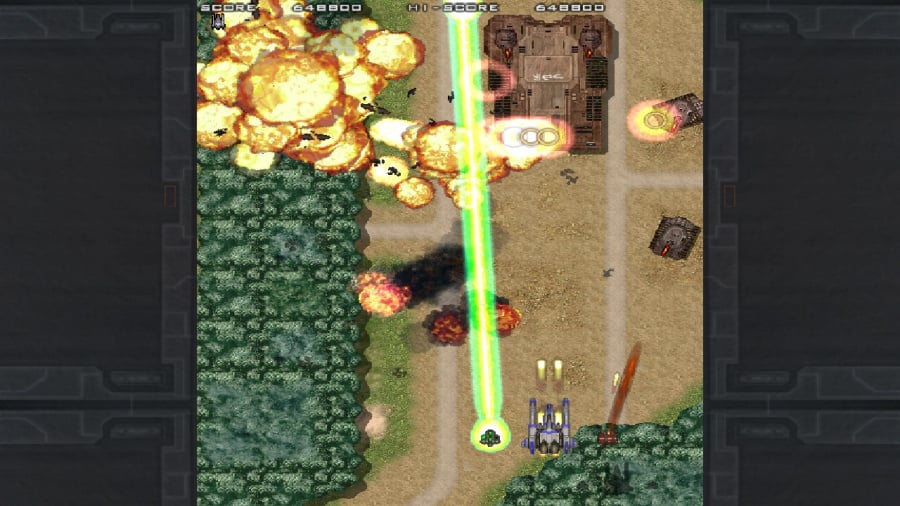 It’s one of gaming’s greatest myths that graphics aren’t as important as gameplay. Without the right kind of graphics, it’s possible to depth-charge the potential of an otherwise enjoyable experience. Visuals are a crucial part of a game’s feel, and a mismatch between what you’re doing and how it all looks is a major factor in whether a title hangs together as a cohesive experience.

Naturally, it’s relevant to Shmup Collection, a rather banal title for a compilation that’s stated to contain three games from doujin developers Astro Port, but technically features five – Satazius and update Satazius Next, Armed 7 and update Armed 7 DX, and finally Wolflame – sans update. These are games that each take inspiration from one classic shmup in the main, and these influences are very much worn on their sleeves.

Horizontal shooter Satazius, to begin with, is effectively Konami’s Gradius with the serial numbers filed off. Of course, that’s no bad thing, given that Gradius is one of the best shmup series ever, but we digress. It’s so indebted to that flagship franchise that it’s almost cheeky – the first stage culminates in your ship being chased through a cavern by a much larger craft, which ploughs throw the walls as it goes, collapsing rocks down from above while launching volleys of missiles your way. Sounds familiar? It should, as it’s almost directly lifted from the opening set-piece of Game Boy classic Nemesis II / Gradius: The Interstellar Assault. 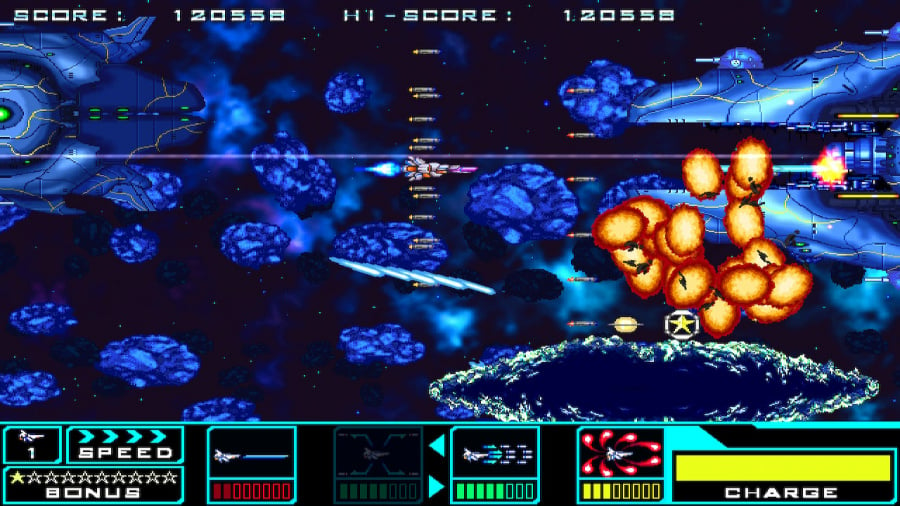 The trademark Gradius power-up system is absent, replaced by a selection of weapons and sub-weapons you level up as you play. They’re all rather familiar – directional missiles, anyone? – but there’s a nice twist in that your accrued weapon power can be unloaded into a single powerful onslaught that’s capable of wiping out most foes in one hit.

Strong stage design that’s clever and tricky without resorting to “bullet hell” style projectile spam makes Satazius possibly the standout game in Shmup Collection, though kicking you back to a checkpoint on death may be a Gradius feature they could have left in the host series. Nonetheless, it’s brilliant fun, but definitely don’t ignore the rest of the package.

Next up is Armed 7, another horizontal scroller that’s clearly inspired by the likes of Technosoft’s Hyper Duel with its multi-directional shooting mech action; again you pick your weapons then head out into battle, aiming and locking your guns as you attempt to tackle the overwhelming odds. As in Satazius, you power up your chosen weaponry rather than collecting new guns, and also have a powerful super-weapon at your disposal you can use it as many times as you please, but it takes a fair while to charge up. 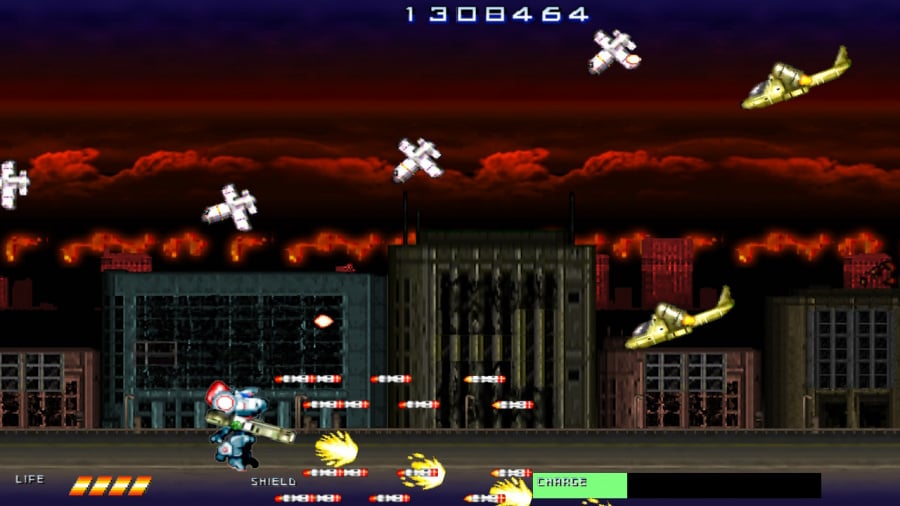 It’s a little samier than Satazius, but Armed 7 is no slouch – the action is challenging and compelling, with the larger size of your mech making everything just that little bit more dangerous. Thankfully this time, you have a refillable shield rather than a traditional “lives” system, which means taking a hit won’t rob you of your weapons or progress, and your shield can be refilled with collectables. It’s still rough going but eminently friendly.

Lastly there’s Wolflame, and the roots of this one seem to be the stone-cold classic Raiden. It’s a vertical shooter this time, with a focus on precision and a slightly more realistic, grounded feel. That is until the skyscraper-sized tanks show up, but realism is relative.

It’s the purest game on the set, the most akin to a straight-up traditional shmup, and as a result, it feels the least interesting. By no means is it bad, or even substandard, but compared with the level design and set-pieces of Satazius and Armed 7 it doesn’t quite measure up. It’s fun, but unremarkable, and a bit of an odd choice for inclusion when Astro Port’s other games include better fits like the ingenious Zangeki Warp and the delightful Supercharged Robot Vulkaiser. 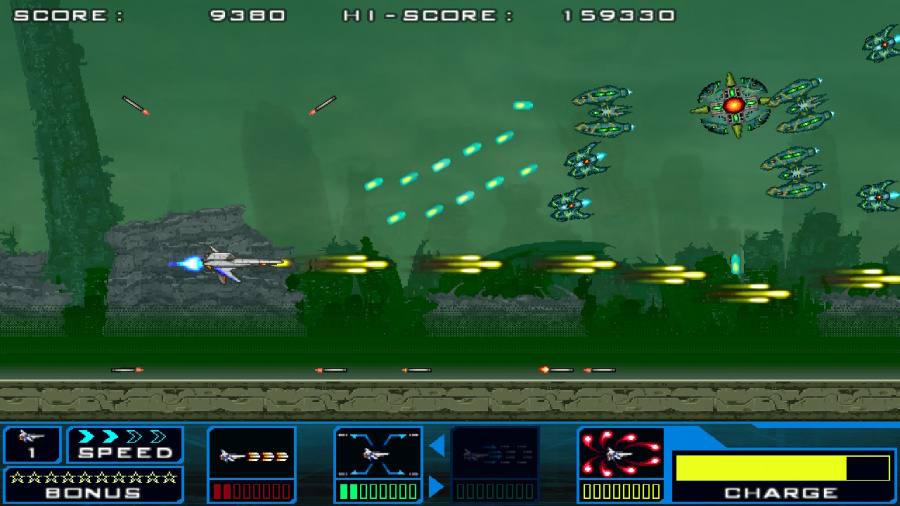 You may be wondering why we mentioned the importance of graphics at the start of this review. The “enhanced” versions of Satazius and Armed 7 (Next and DX) have arranged soundtracks, some changes to bullet patterns and level design and, crucially, brighter and more colourful graphics. Unfortunately, this leads the games to look garish and detracts from the original versions’ atmospheres; coupled with the less-than-impressive animation (mostly rotating sprites), these “improved” versions actually feel worse than the originals. They’re fine, and entirely playable, but we found ourselves wondering why they felt the need to mess with elements that worked. Yes, the graphics in Satazius are a little grungy, but they fit the game feel. It was a case of less meaning more, and resulted in a coherent, logical progression from the game’s look to its mechanics. The deluxe versions sacrifice this for unnecessarily flashier visuals. It’s a small complaint, though, as the games on offer here range from good to great.

Satazius is the pick of the pack and almost worth the asking price in itself, but if you enjoy the shmup genre then Shmup Collection is a package that will keep on giving. There’s nothing in the way of extras outside of each game’s respective practice/stage select mode (and a “Tate” mode for Wolflame, for those with a Flip Grip), but you won’t find yourself wanting. This is an impressive bundle of joy at a very competitive price. We just hope it’ll be followed by a second instalment; Astro Port has a lot of awesome games in its catalogue and we’d love to see them find a second home on Switch.

Turns out a simple Steam Deck mod means you can install a larger NVMe SSD
Locked In Movie Review: Testing Morality With a Fight to Survive
Arcade Paradise launches on PS4 & PS5 on August 11
Apparently Avatar 2’s Trailer Made A Notable Change So It Could Play In Front Of Kids At Lightyear Showings
Outriders Worldslayer review: Another bumpy ride on Enoch