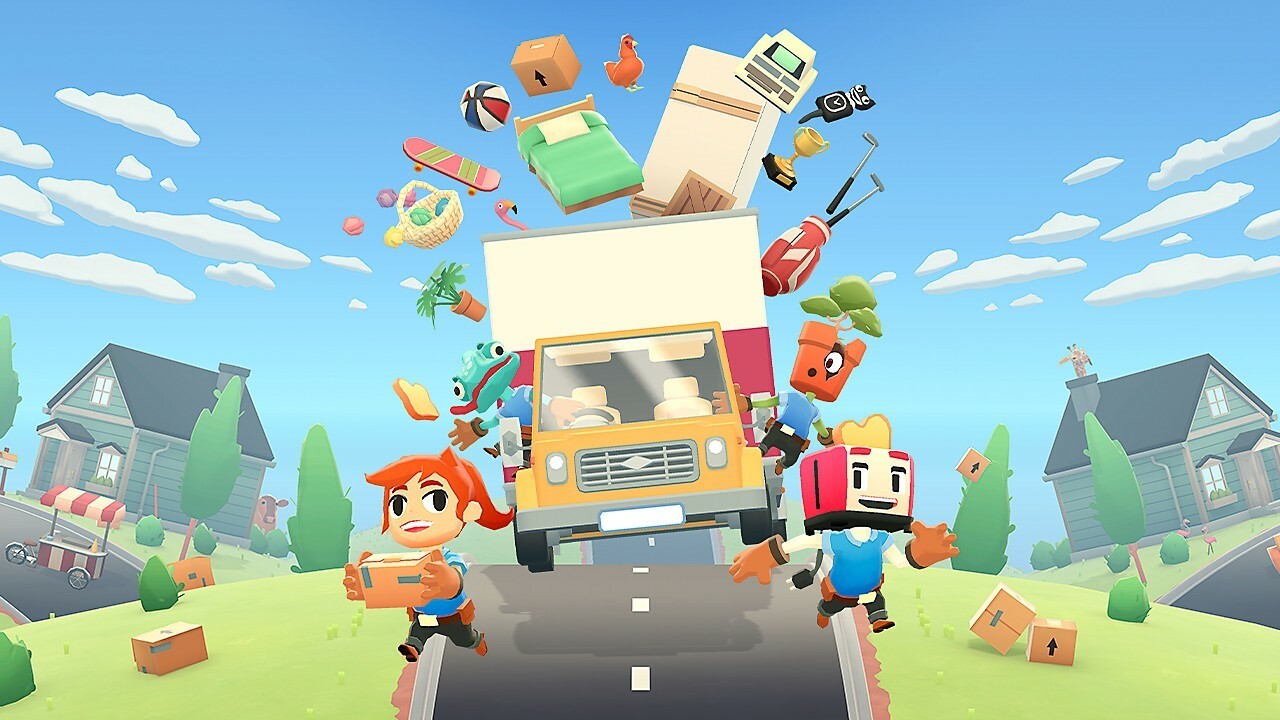 When it comes to great co-op games to enjoy with your friends and family, competition is certainly fierce on the Switch. Moving Out is Australian developer SMG Studio’s latest offering and follows on from Death Squared, a brilliant local-co-op title that proved that the developer has the chops for local multiplayer mayhem.

We recently had the chance to interview the studio’s CEO Ashley Ringrose to find out more about Moving Out’s origins, SMG’s partnership with DevM Games on this project, and the inspiration behind this manic home removals sim over three years in the making…

Nintendo Life: For those who missed the previous announcements, give us a quick lowdown on Moving Out and what it’s about.

Ashley Ringrose: Moving Out is a couch co-op game for up to four players, which sees them as Furniture Arrangement and Removal Technicians (F.A.R.Ts) doing moving jobs in and around the town of Packmore in the quickest time. It’s wacky and zany, and a lot of fun!

It started out very simulation-like but evolved over time to embrace the chaos and fun that comes from throwing couches to get the quickest times.

Where did the original concept for Moving Out come from? Does somebody in the team have removal firm horror stories?

Well the initial idea came from Jan over at DevM Games, our development partner on Moving Out. He was inspired after helping some of his friends move to a new apartment. Before the move itself they got together and “pre-gamed” the move by drawing out diagrams and sizing the couch so they could work out how to get it out the doors and down the stairs. That’s when he realised there was some potential in turning that into a game. It started out very simulation-like but evolved over time to embrace the chaos and fun that comes from throwing couches to get the quickest times.

How did this collaboration between DevM Games and SMG Studio come about, and what aspects of the game were the two teams responsible for?

I had known Jan since 2013 as he had made flash games for us in my previous company Soap. We worked together well (he’s one of those people that everything they do is good) and I emailed him every 6 months asking if he wanted to work for us (and failed!). It wasn’t until early 2017 that he tweeted about an idea that was growing in scope that he decided he wanted to team up. Finally! Recruitment long game win!

The game I’m currently working on is constantly growing in scope, it may become much better, but there’s also a huge risk for my finances.— Jan Rigerl 🕹📦 Moving Out: OUT NOW!! 📦 (@zworp) March 29, 2017

Jan had the initial concept/prototype and the core engine built and SMG came on board to do everything else. Jan is a pretty easy-going guy so as long as we kept making the game better, he was happy. I’m not sure what hours he kept in Sweden as he always seemed to be up but was able to work really well and gel with our team (who is also easy-going).

After a few months on development we were lucky to team up with Jon from Soft Science who had just finished The Gardens Between and he was able to create and consolidate the visuals that really made the game shine.

We teamed up with Team17 to help us publish and deliver the best game we could. Our team in Melbourne was smaller and newer than Sydney so by leveraging the design and production talent at Team17 it allowed us to extend the brain firepower we had on the game greatly. For me personally it was a huge relief as I didn’t want to be the bottleneck on the project when it came to the release management.

This collaboration method worked really well for us as it means we didn’t have to hire such a large team and everyone could focus on what they did best. We were able to pass the 10+ console certifications easily first time (4x platforms with 4x demos and 3x Day 1 patches) thanks to the large and extensive QA team at Team17 that was working with our in-house devs and producer.

How long has the game been in development? Has it changed in anyway throughout the development process? If so, how?

Here’s what the game looked like over those various stages:

Compare the image above to the April 2017 build on the left, and the final release.

Death Squared was an early indie hit on Switch and SMG supported it well after launch. It’s still one of the best co-op games (on a console with plenty of them to choose from). How did your experience with that game influence the development of Moving Out?

Thanks for the nice comment. Death Squared was a big factor for Jan choosing to work with us. He knew that we had experience in this genre and I also had learned so much in the process.

I think the biggest influence Death Squared had on Moving Out the game was we wanted to avoid the issues we encountered with DS. Focus on a strong, vibrant and visual identity. Have a name that’s fun and doesn’t mention Death! And have strong characters people can identify with.

I personally had a lot of fun with the story side on Death Squared and working with a writer to add this extra, silly story to a game that can function without one. So we wanted to continue that with Moving Out. Same with Death Squared, I was telling the team we can make ANY levels we want and we’ll adapt the story to make it work. Because the story is a sort of 1980’s cartoon story we didn’t have to overthink everything. If we wanted a Haunted House we just added one. Done! What else do we want? Go to space? Sure!

Because the story is a sort of 1980’s cartoon story we didn’t have to overthink everything. If we wanted a Haunted House we just added one. Done! What else do we want? Go to space? Sure!

Publisher Team17 is onboard for this game and has experience putting out manic and colourful co-op games on Switch. Did Team17 approach you to publish? How did that come about?

Team17 noticed us when we announced at the Kinda Funny Games Showcase in Dec 2018. That was a huge moment for us and I can’t thank Greg or the Kinda Funny team enough for that initial exposure. That’s another flow on from Death Squared as we met the KF team in SF when they played it on their stream.

After the KF Showcase we spoke to Debbie Bestwick, Team17s CEO on the phone and was really impressed with the offering and their experience in the co-op game genre. I knew they’d have much more to offer than just publishing. We really wanted to work with their design and QA teams to help us deliver the best game.

Team17 stablemate Overcooked will no doubt jump to players’ minds when looking at Moving Out, whether through the art style or the frantic co-op gameplay or Team17’s involvement. The team must have been conscious that those comparisons would crop up, so how do you go about setting this game apart from other colourful co-op titles on Switch?

Luckily, the games play and feel totally different. Team17 wouldn’t have picked us up if it was the same game with a different “skin”. Our focus was on making the game playable by everyone no matter what your abilities and to ensure we tuned the game for fun [rather] than frustration. We also wanted to ensure we still had an engaging single-player experience.

The ‘Employee of the Month DLC’ is already available (free if you pre-ordered the game), and there’s a demo up on Switch eShop. What are your plans regarding DLC in the future?

We’re only a couple of weeks after launch, so still enjoying seeing the reactions of players as they come in. We’ve got lots of ideas as I think we’ve made a very fun “sandbox” so we’re just looking at what else we can do in there.

What other games on Switch has the team been enjoying recently?

The Touryst was a nice surprise game that just delivers so much in a simple package. I played that with my seven-year-old son and he calls me in for the complicated platforming bits. I end up looking like a Pro Gamer to him when I nail the sections first go.

I’ve also almost finished Agent A with my son. He’s enjoyed that one so much he started leaving clues to riddles around the house. And lastly trying to lose the “work from home” belly on Ring Fit.

And to wrap up, is there anything else you’d like to highlight about Moving Out?

I mean, where do I start? The soundtrack was literally out of the 1980s via raiding the archives of a legendary music producer Lenny Macaluso who wrote The Touch with Stan Bush. We have also got a ton of accessibility and inclusivity options so everybody can joy the chaotic fun of the game; hopefully the kids, grandparents and those with less physical ability can enjoy equally.

Moving Out is available now in physical form in addition to digitally on Switch eShop. We enjoyed our time with the game – be sure to check out our Moving Out review for the full lowdown, and let us know below if you’ve been enjoying the game.