Let it not be said that Terraria failed to go out with a bang. Dropping today, Journey’s End is an exhaustive final update for Re-Logic’s venerable block-building sandbox. But beyond new items, biomes, bosses and golf, Journey’s End formalises mod support by releasing a fan-made kit as free DLC, putting Terraria’s future in the hands of the folks still playing it ten years on.

Journey’s End is a doozy of an update, with a proper novel-length changelist to trawl through over on the Terraria forums. Don’t like how your minimap or health and mana bars look? Now you can change ’em. Feel like trying some lava fishing? Sounds dangerous, but now it’s doable. Want your expensive Razer Chroma keyboard to light up like a fireworks show every time you dig a hole? Yup, that’s supported too.

Perhaps you just want to relax with a few two-dimensional rounds of the King’s game? With Terraria golf, that’s entirely now a thing you can do. 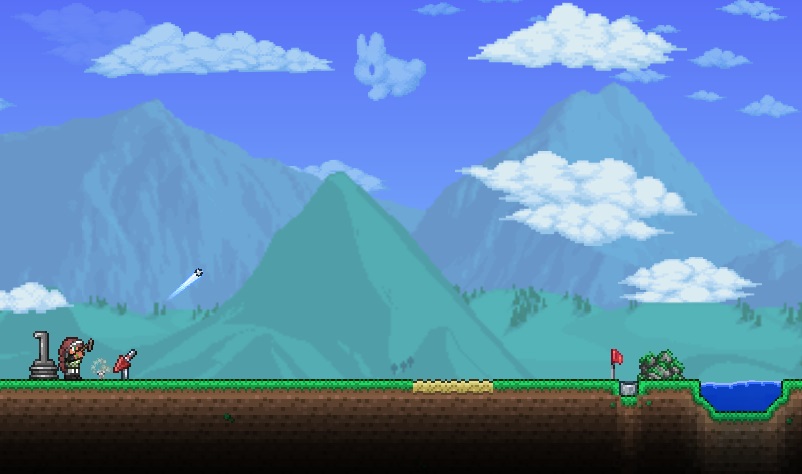 The final update also includes two new gametypes. Journey Mode, described as a “more accessible Terraria experience”, adds more structured play by letting you research blocks and baddies to slowly build up ludicrous powers – eventually letting you duplicate blocks, change the weather or adjust the game difficulty on a whim. On the other end of the spectrum, Master Mode is a new, achingly hard mode for folks who reckon base Terraria is a little on the easy side.

Then there across-the-board rebalancing to enemies and bosses, more than 1000 new items, and fixes up over 450 bugs and exploits. A lengthier changelog is tucked away in a follow-up post in that thread. But be warned – with all those nested additions and details, you’d better be prepared to do some real digging to find everything.

As a nice little bonus, Re-Logic have also released fan-made mod tool tModLoader as its own piece of free DLC on Steam. TML has been kicking about for years – but with the devs wrapping up their own updates, they felt there was “no better way to tie things off than to hand the keys over to the fans” to ensure Terraria stays fresh for months to come.

The current version of TML supports the version prior to Journey’s End, 1.3.5, though Re-Logic hope to have 1.4 modding supported “as quickly as possible”, along with eventual Steam Workshop support. If you’re eager to start plugging away at mods, Dominic’s put together a list of the best Terraria mods to get you started.