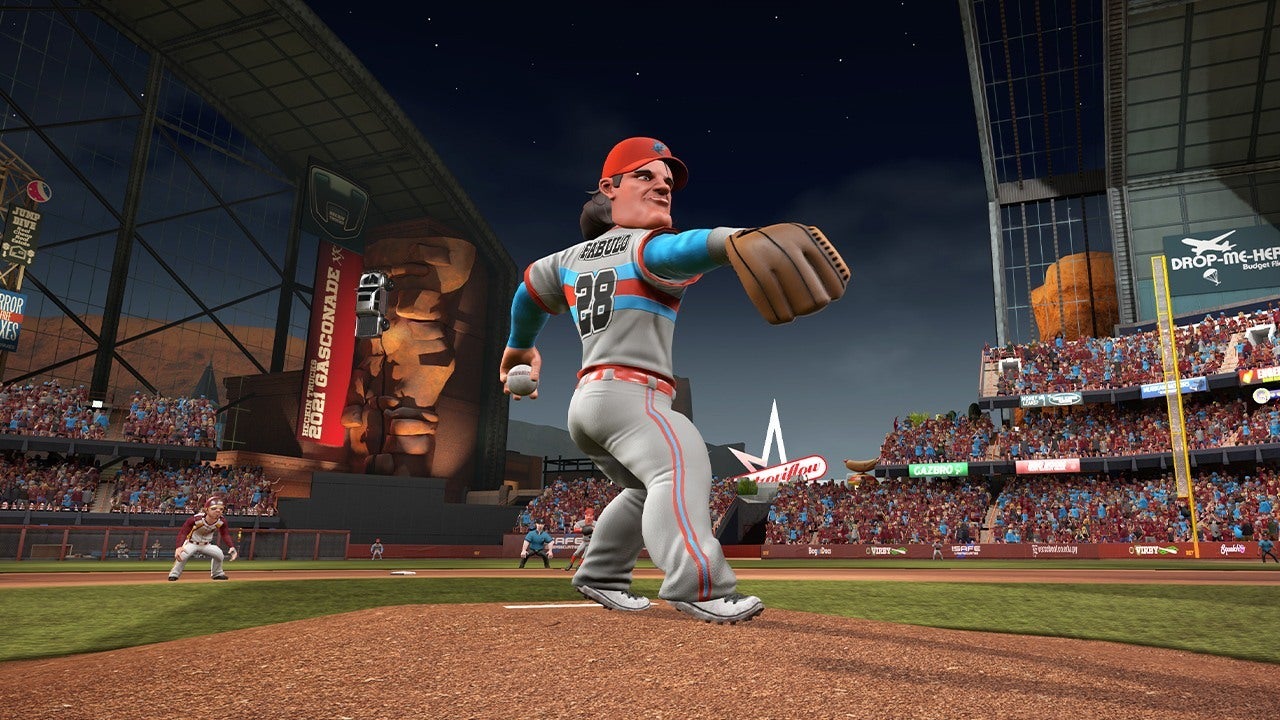 It’s funny to think about now, but there was a time when fans had a wide variety of baseball games to choose from. If you didn’t want a complex simulation of the real thing like MLB The Show, you could find baseball games featuring robots, little kids, or even living bobbleheads. Most of those have gone the way of the dodo now, but Super Mega Baseball 3 throws it back, not only by offering a less serious option but by recapturing some old favorite retro-style pick-up-and-play gameplay and features.

Despite the double-superlative name, this isn’t an “extreme” arcade sports game in the vein of the cartoony NFL Blitz or NBA Jam. There are no over-the-top power-ups or zany circus catches. Instead, the Super Mega Baseball series features accessible and grounded gameplay, with hits that come off the bat in authentic ways and fielders who play to their abilities based on their stats. Batters produce a satisfying variety of bloop singles, sinking line drives, and lazy popups, all dependent on the location of the pitch and timing of the swing. Defensively, diving fielders more often than not knock the balls down rather than come up with miracle snags. While the player’s appearances border on the surreal, the baseball is certainly real enough. Super Mega Baseball 3 continues the tradition of realistic and refined baseball gameplay that’s more simulation than arcade, yet with simple controls that even younger players can grasp.

Everything I liked about Super Mega Baseball 2’s gameplay returns in Super Mega Baseball 3, including the ultra-customizable difficulty system and performance-based player confidence. The ability to use power swings and pitches is back with some nice tweaks to increase the risks and rewards of proper timing. During games, the option exists to expertly time a pitch or swing, potentially adding the little extra oomph needed for a home run or strikeout. However, overthrow a power pitch and expect that ball to not go where you want it to. With a power swing, your odds of hitting a home run go up… but your ability to simply make contact goes down. In the past, using the power options during crucial situations created some memorable moments; the increased risk/rewards only serves to sweetly ramp up the tension. I also like that AI batters seem less robotic and more likely to swing at pitches outside of the zone. I was able to generate more strikeouts than in the past by throwing junk in and off the plate.

Super Mega Baseball 3 also takes its best swing at filling in some key baseball elements that were missing in SMB2, and the result is a more realistic baseball experience. In particular, the battle between baserunners and catchers has been intensified. In the past, when you wanted to steal a base you’d give the command and watched as the runner waited until the pitch was thrown. Guessing when to steal – optimally during anticipated off-speed pitches – was the only true decision for the offensive player. On the other side, there was little an opposing pitcher could do other than hope the catcher had time to make a throw. Whether the runner was safe or out was largely dependent on luck.

I love the way it puts focus on an often-underappreciated aspect of the real sport.

In Super Mega Baseball 3, runners leave as soon as the steal button is pressed, creating a fascinating timing mini-game that duplicates the tension of stealing a base in the real sport. Leave too early and the pitcher only needs to step off the rubber and throw to the bag; leave too late, and a good catcher should gun you down every time. Situation and timing now determine stealing success, and this minute change really makes swiping a bag a much more fun and interactive aspect.

To combat this new level of runner control, pitchers can now perform pickoff moves with a simple press on the d-pad – pickoffs aren’t quite as nuanced as stealing. In fact, they feel more like the luck-based decisions of the past. If you try to pick off the runner and he actually is stealing… good job, you got him. But, if the runner isn’t going, he will automatically dive safely back to the bag. It’s disappointing to not be able to catch bad baserunners who are simply slow to react.Finally, added to this mix are catchers’ fielding abilities. Bad defensive catchers will see passed balls and dropped third strikes get by them, which love for the way it puts focus on an often-underappreciated aspect of the real sport. Collectively, the interplay between baserunners, pitchers, and catchers really elevates the excitement between pitches and inches Super Mega Baseball 3 toward a more complete and authentic baseball simulation.

If stellar gameplay is the first thing I think of when recalling the Super Mega Baseball series, weird-looking players might be the second. Super Mega Baseball 3 brings back the exaggerated cartoony player models, to mixed results. While I appreciate the diversity and range of players, too many look unnaturally Frankensteined together from random parts.

Outside my issues with some of the player models, Super Mega Baseball 3 is a great looking game. Players are full of personality thanks to creative and humorous animations. The 12 whimsical stadiums showcase beautiful new lighting options, including twilight, mist, and summer haze. All of this seems to come at a slight cost of longer-than-expected loading times. Also of note is the very accessible customization tools, including what might be the best logo designer in any sports game. It is so easy to create fun and imaginative logos that look real enough to grace the caps of a minor league team.

Aesthetics aside, my favorite new feature lies within the players’ internal makeup: situational traits. In addition to typical stats, players can now have up to two traits that trigger depending on the circumstances of a game. For instance, the RBI Man trait grants contact and power boosts when batting with runners in scoring position. The K Man trait gives a pitcher better control when facing two-strike counts. Some traits are even negative, such as runners who suffer a speed penalty when trying to steal or batters who wilt under the pressure of an RBI opportunity.

These traits offer a new level of strategy when setting lineups or handling opposing teams. For instance, I chose to start a bench player whose trait gave him an edge against lefty pitching when facing a southpaw. Pitching against a batter who crushes inside pitching made me nibble on the outside corner, producing an untimely walk. These traits also help to differentiate players outside the traditional stat bars (Contact, Power, Speed, etc), breathing life into a roster of fictional players.

Super Mega Baseball 3 not only adds these new traits but makes them easy to see in action. When a trait is triggered, a little audio cue alerts you that someone’s trait is active. Holding the right trigger, whether batting or pitching, brings up a list of active traits and their implications. It’s very handy that these traits not only enhance the gameplay but are so easy to recognize and use to your advantage.

Perhaps the biggest addition is the new multi-year Franchise Mode, which is very welcome after Super Mega Baseball 2 limited us to single seasons. While it won’t compete with the depth found in games like MLB The Show, I like that this streamlined take puts emphasis on finding and developing unique players.

During the course of multiple seasons, various development opportunities pop up that allow managers to spend money for stat increases and/or trait gains. Seemingly simple, these chances lead to some really interesting choices. For instance, putting a batter on a red meat diet may increase their throwing strength significantly, but the added bulk will also slow their running speed. And since most of the development choices have some degree of randomness, any one outcome isn’t guaranteed. Eating all of those steaks might lead to a bigger jump in throwing ability than expected or it could grant the “Bad Jumps” negative trait… or both. I enjoy the coin-flipping animation that communicates what happens after the agonizing decision is finally made.

Small descriptions help tell a story instead of just increasing or decreasing a numerical stat.

Even though most of these decisions are simply new numbers, like “+4 to Contact skill,” I love that they are themed with a touch of humor. Players can jazzercise, join a reality show, or explore Black Market Acupuncture. Age-related events are similarly narrated; I had a young player master a yoga pose while my older infielder started suffering leg cramps. These small descriptions help tell a story instead of just increasing or decreasing a numerical stat.

These training options are woven into a fairly light economic model that also includes player salaries – but, disappointingly, no trading. Instead, there is one giant free agent pool that you can use to replace players one for one, paying or gaining the difference in salary. It’s a relatively simple system that sees players move through this free agent pool until they eventually retire. While trading would have been nice, not relying on a heavy economics system puts the focus on the players, not managing mundane details like contracts, roster size, or ticket prices.

Like the previous two games in the series, the sound design remains unimpressive. While crowd noise enhances the gameday atmosphere, the background and walkup music is pretty vanilla. I do like the addition of an announcer; hearing the goofy names like “Junior Young Sr.,” “Lacky Luster,” or “Nacho Crisp” makes me smile.

What We Said About Super Mega Baseball 2

From our May, 2018 Super Mega Baseball 2 review, by Caley Roark:

“Super Mega Baseball 2 is a grounded baseball simulation wrapped in an arcade-style look and feel. An accurate physics engine generates realistic hits, and it keeps stats and models fatigue and morale in interesting ways. This realism is betrayed by a few control issues that affect the timing when batting and an AI that doesn’t always behave as you’d expect. However, the unique Ego system allows you to tweak the difficulty of batting and fielding individually until you find the perfect challenge. And while it lacks the MLB license, you could use the accessible customization tools to recreate the entire MLB if you wanted to.”