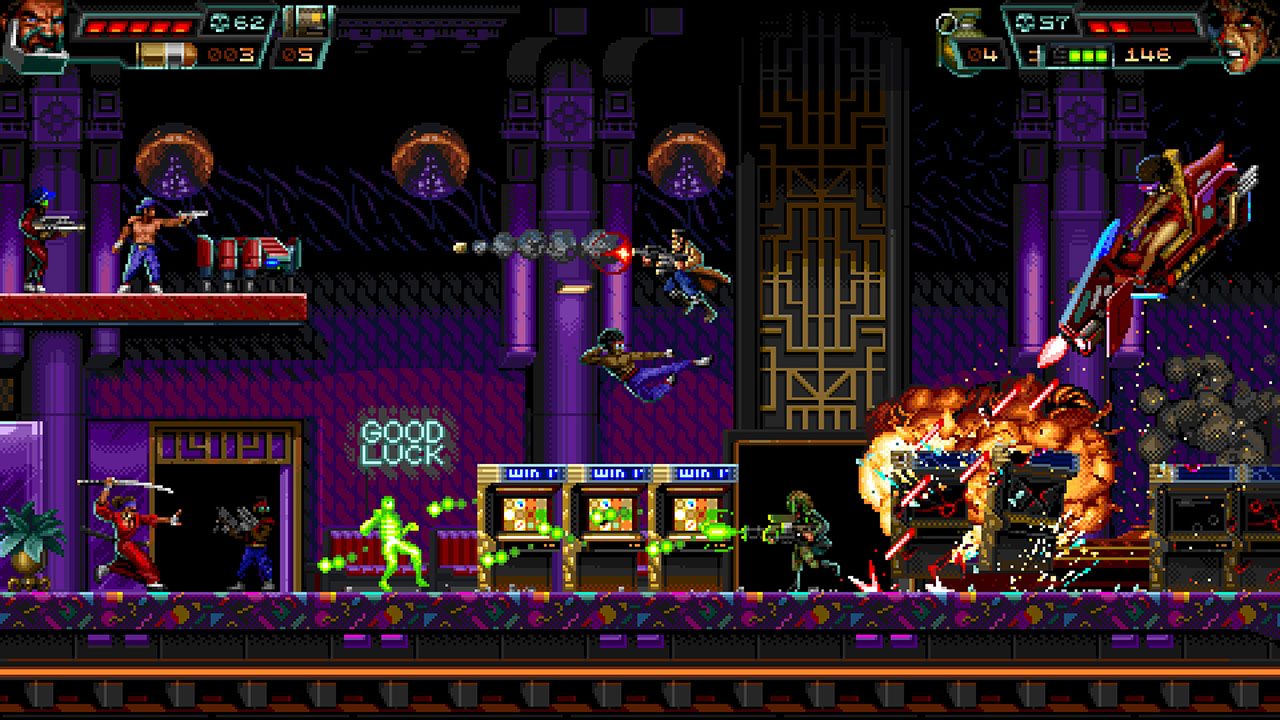 Take a trip through the annals of gaming history with three retro-inspired highlights dropping on PS4 and PS VR next week. Huntdown is a neon-drenched action shooter set in a crime-ridden city that needs cleaning up, PS VR’s Pixel Ripped 1995 follows up the excellent Pixel Ripped 1989, bringing the original’s clever concept into the 16-bit era, and Ion Fury is an expertly-crafted love letter to the industry’s earliest first-person shooters.

Emma: Lost in Memories is a 2D puzzle platformer game in which all the platforms and walls start disappearing progressively as you touch them. Think, strategize, run, jump and feel in a surreal and poetic world where everything fades away.

Fault is a series of Science Fantasy Cinematic Novels using a unique 3D Camera system for a visually immersive reading experience. Follow Selphine, the bubbly Princess and her sharp-witted Royal Guardian, Ritona, on their journey of a lifetime back to their homeland of Rughzenhaide.

In the mayhem-filled streets of the future where criminal gangs rule and cops fear to tread, only the bounty hunters can free the city from the corrupt fist of felony. Lay waste to the criminal underworld and make a killing in this hard boiled action comedy arcade shooter.

Ion Fury laughs at the idea of mandatory checkpoints and straight paths through shooting galleries. But, just because this is a true old-school first-person shooter doesn’t mean we’ve ignored all the good new stuff the last two decades have brought. 3DRealms, Voidpoint and 1C Entertainment have taken the best of both worlds and cooked it all into a bloody stew.

A group of amazing islands need your help! Horrid plastic waste has washed up and you need to sort it out with your trusty Trash Blaster. But look out for the Litterbugs. They love mess and they’re out to muck things up. You need to wash away gloop, collect litter, earn coins and rescue the bankimals!

Pixel Ripped is back with a brand new nostalgia-fueled virtual reality game-within-a-game, this time in the year 1995! To restore balance to multiple dimensions, our videogame hero Dot recruits the help of the best gamer from 1995, an unassuming 9-year-old boy named David. Join this unlikely duo through challenging throwbacks to all your favorite classics from the late 16-bit and early 32-bit era of games inside a virtual reality world.

Pong Quest is a new take on the seminal arcade smash. Take control of a brave young paddle and traverse treacherous lands – each loosely based on various classic hits — in this uniquely Pong-themed dungeon-crawling RPG. Dress up your paddle and equip special balls with unique abilities to battle aggressive foes in Quest or online opponents.

This adventure platformer tells a story of a young witch exploring fairy forests to find herself and save her home. Join her quest now! Immerse yourself into a picture-perfect fantasy — solve numerous puzzles, fight enemies, reveal all the secrets… and don’t forget to save the world!

Tacticool ChampsPS4 — Digital (Out May 15)

Tacticool Champs combines the best features of shooter and arcade game, where up to four players fight with each other in a closed arena. Quick matches, a wide variety of weapons, and unlimited ways to eliminate the opponents are waiting for you!

Thy Sword is a retro-inspired hack-and-slash roguelike with procedural generated levels. Pick from different hero types like the Barbarian and Valkyrie to break the tyranny of the Dark Overlord!