I would not characterise Assassin’s Creed Valhalla‘s new gameplay trailer as being chock full of gameplay. Being real: it is clearly mostly cinematic sequences made in the game engine, i.e. they are all scenes that we may encounter during the course of playing the game, and on that basis we can’t have ’em under the Trades Description Act. But I couldn’t spot a hot second of over-the-shoulder axe action, and given AC is a third person series, that’s a bit of a giveaway, isn’t it?

Still, I’m not one to look a gift trailer in the mouth on such a lovely Bank Holiday weekend! There was lots in there to get the blood pumping, wasn’t there?

Watch the trailer above if you haven’t already. Marvel at the amount of game being played. Share with me your favourite bits. Mine are as follows. 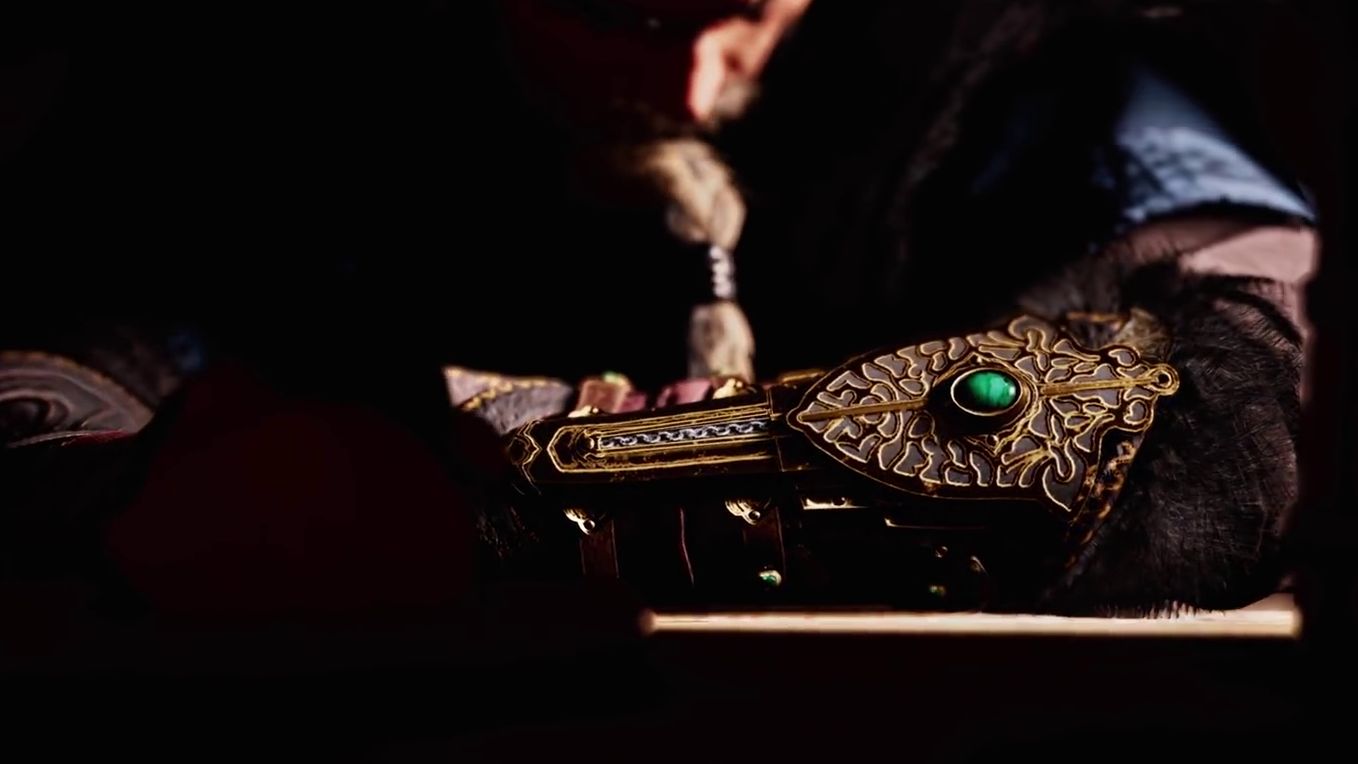 Odyssey’s magic broken spear was all well and good for slamming through an entire torso at once, but I have missed the hidden blade. We saw it in use in the first trailer, and now we’ve had a wee close up of the casing itself. And Eivor’s hidden blade is very cool! It’s ornamented, bejewelled, and kind of has the vibe of a family heirloom. If I had one it would be the most expensive thing I owned and I would doubtless never use it in case it broke (also because I have never killed anyone and probably don’t have it in me).

I’m really interested to see how it works into both the history of her people, and the history of the Assassin’s Creed lore in general. Is this one of the first hidden blades? Why is the blade on the outside and not the inside? How does that change its tactical applications? And so on, and so forth. 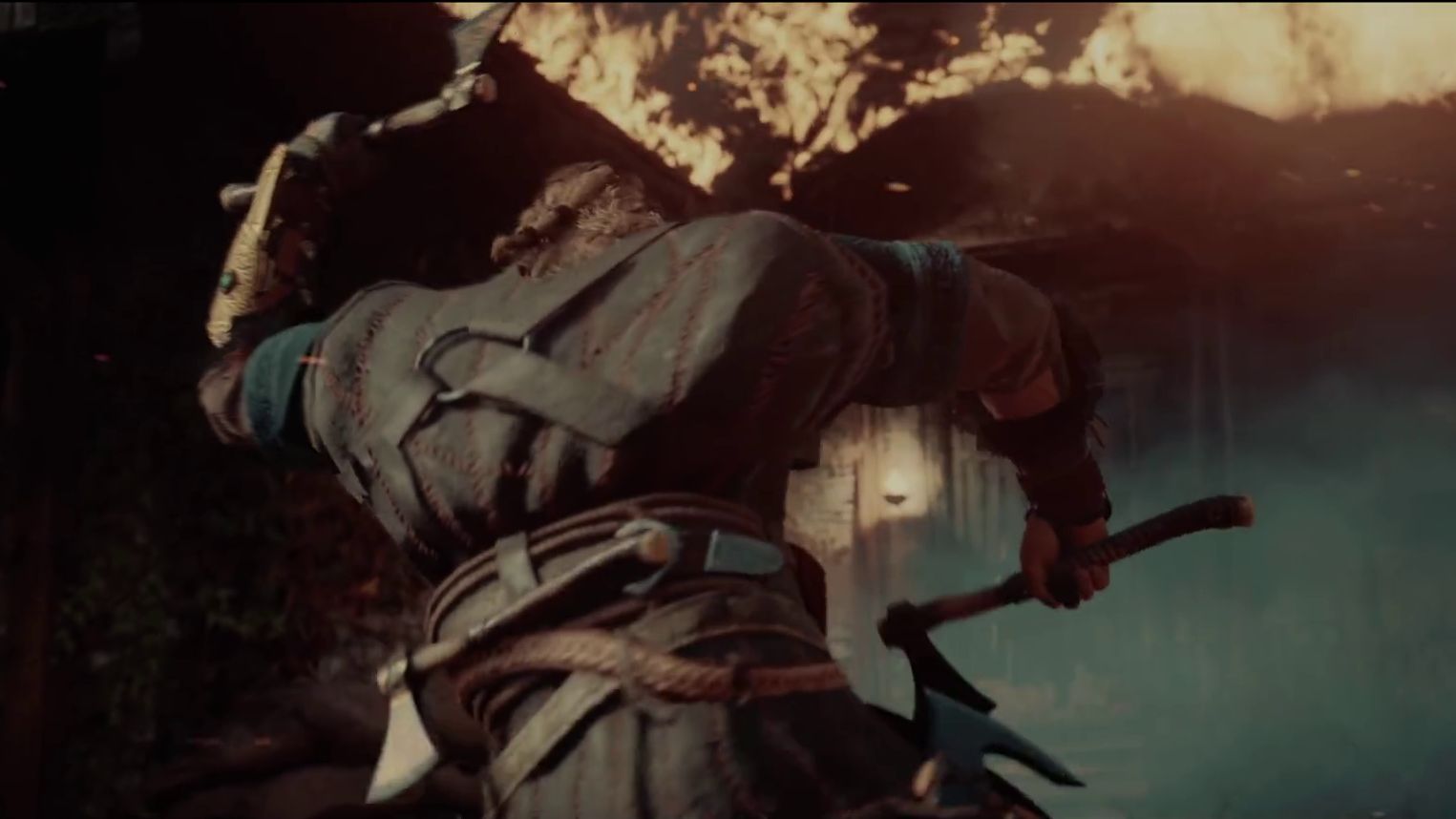 Fun fact is that if you go through the video frame by frame to get a still, like I did, you can see the exact frame where the axe in his right hand appears out of nowhere.

I’ll stay on the weapon theme for a bit. Just as being able to kick the living shit out of everything is a must in a game about a Spartan, so is holding an axe in each hand and lacing them at the world a must for a game where you’re a viking. Thus I was pleased to see Eivor doing that in this trailer, which promises that I can do that in the game. I know we’ve seen it loads in promo still shots, but seeing it in action is something else.

I may not have gotten my wish for the combat to be stealthy again, but creative director Ashraf Ismail said in the Xbox Series X stream that they’ve once again overhauled the combat to make it “visceral”, as well as adding a “fresh take on player progression”, plus new weapons and enemies. On the one hand, that is clearly the sort of vague statement a developer would make at this early stage of the PR process, but on the other hand smashing two axes into someone at once really takes the edge off my complaints. Axes. Axii? 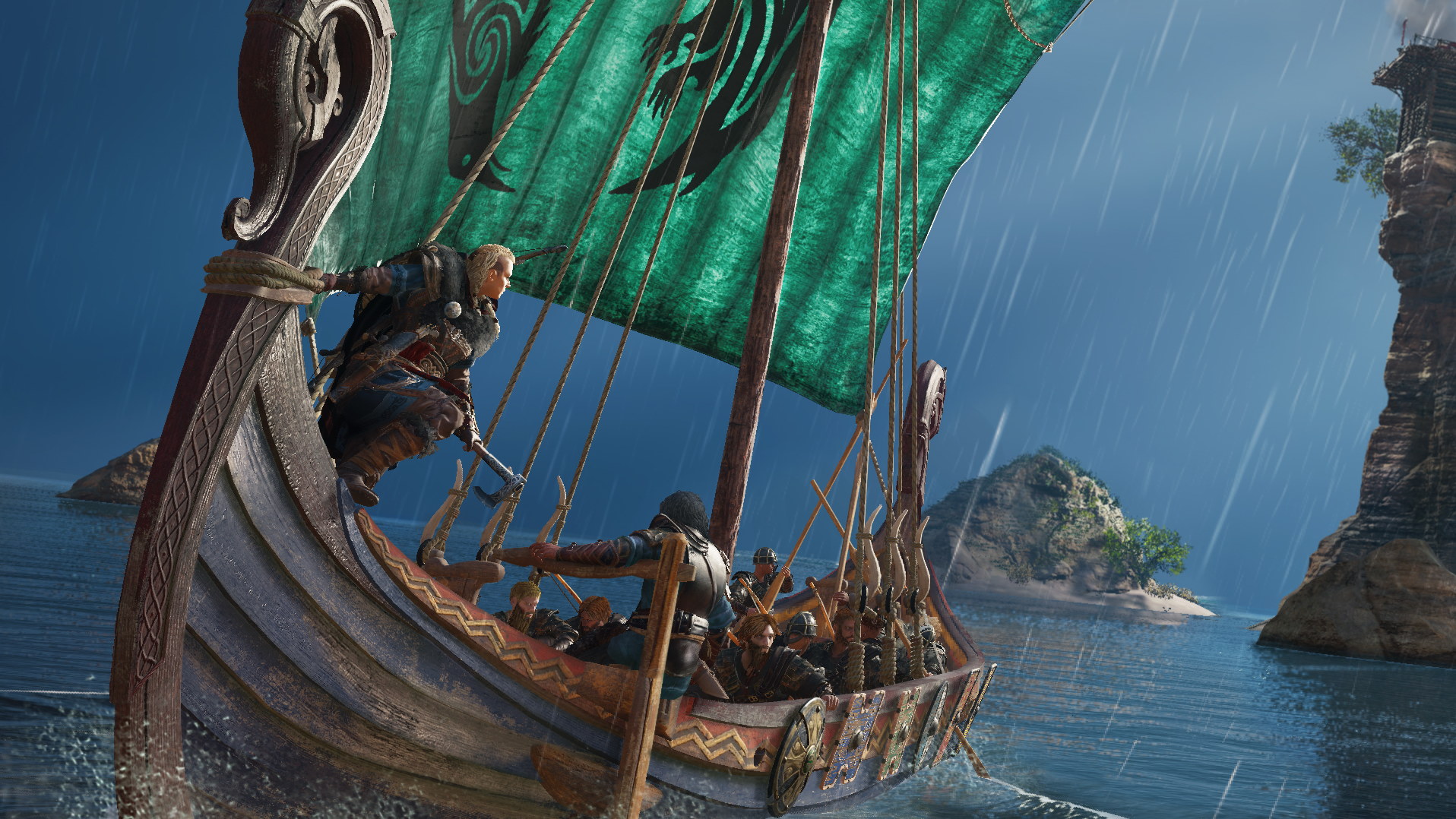 The devs have been talking about raids being an important part of the game to get supplies for your little fledgling settlement. Now we’ve seen the boats moving about a bit more in the engine, I’m pleased. They look like sort of a cross between the massive triremes and/or pirate ships of previous games, and the smaller, nippier one-person boats in Odyssey and Origins.

Since the devs have talked about using waterways – rivers and such – to navigate the country, I’m excited for that increased manoeuvrability and the potential combat applications of same. I can almost guarantee you there will be a tutorialised mission where you have to try and beach your ships quietly near a prospective raid target, in fact. 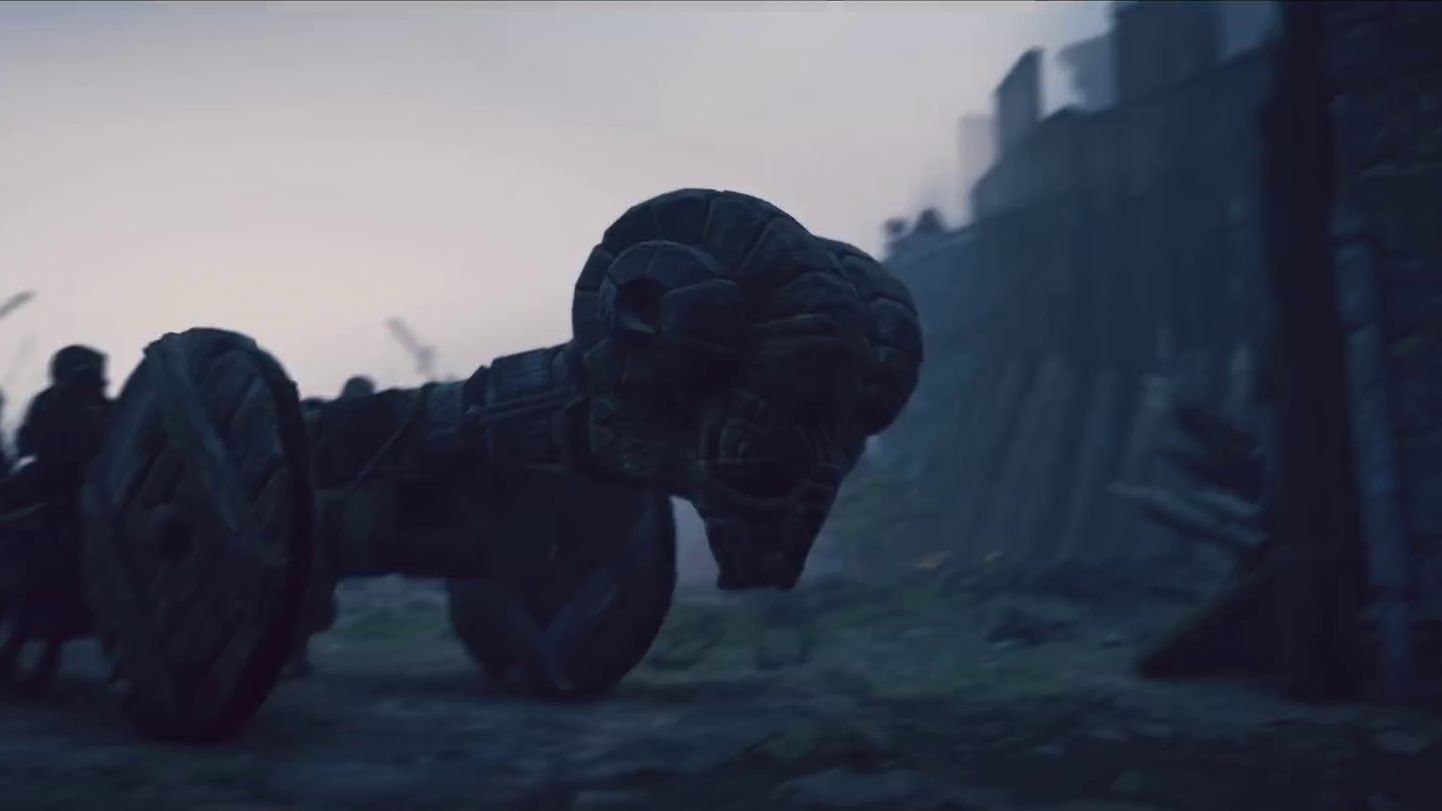 I ram what I ram

There were a couple of shots of what looked like siege action going on, in particular a big door being rammed open, always a classic sign of a siege. Since this was all obviously pre-did and not really real, there’s no way of knowing if that happens in one significant cinematic, if it happens loads, or if it isn’t even in the game at all, like when films put jokes in trailers that aren’t in the final cut. But I will say that I would welcome sieges as a way to shake up the warfare battle bits introduced in Odyssey (because those bits were fun the very first time you did one and a bit annoying after that). With a siege you can get more tactical, choosing approaches and what not. And then set fire to a castle. 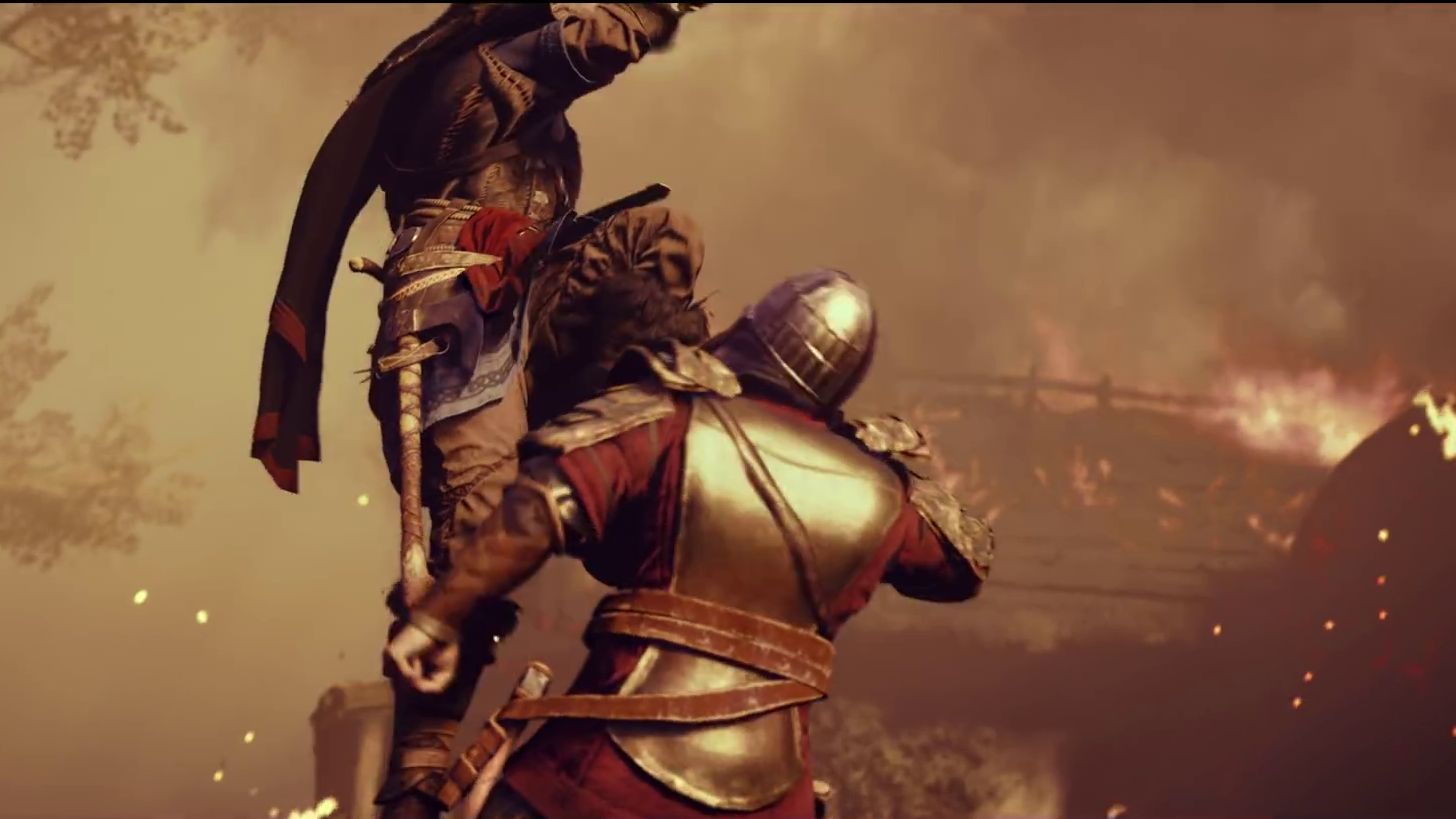 Alright, it’s not a kick, but there’s a bit at about 50 seconds into the video where Eivor does what is basically a souped up wrestling move, and if that is a special attack or finishing move then I welcome it. If this is the first and last time I see it connected to the game however, I will be very cross.