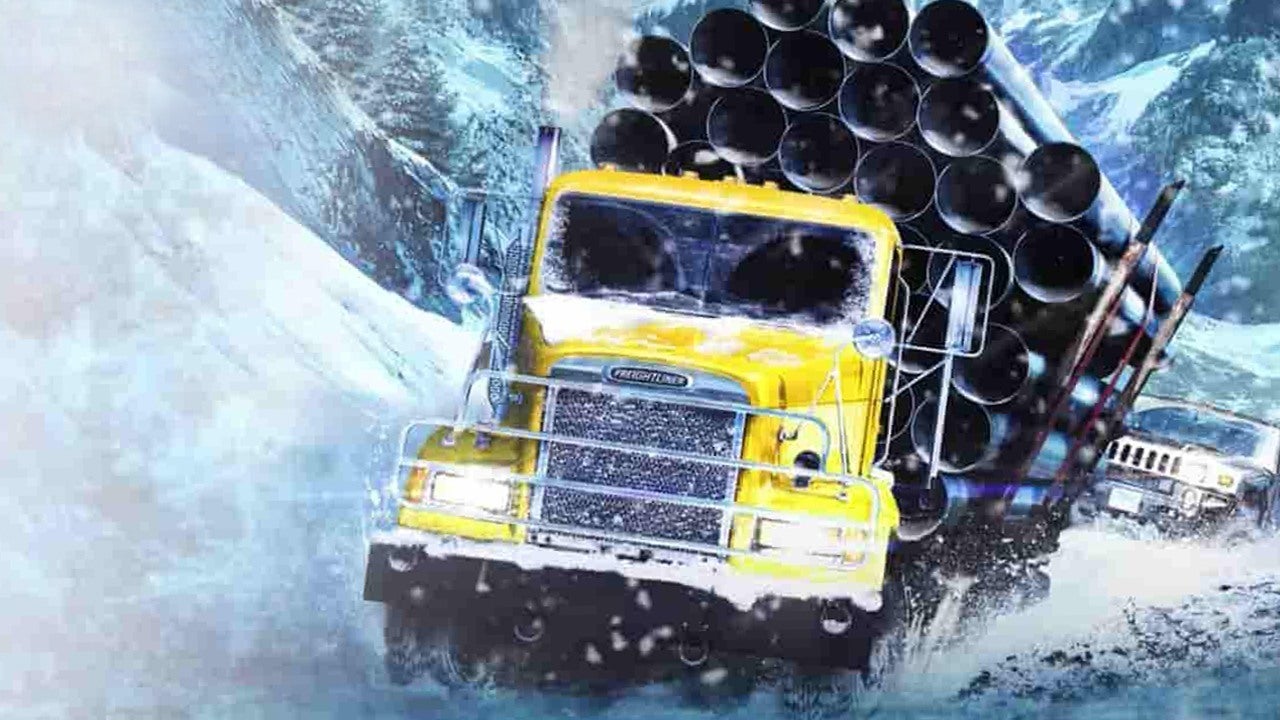 There are a bunch of different kinds of difficulty in games. Some test your reflexes and timing, some test your tactical smarts, and others try your patience. SnowRunner’s brand of harsh difficulty is a uniquely slow paced but infectiously rewarding blend: it’s a sandbox-style trucking simulator where the enemy isn’t time, it’s the harsh and hostile terrain.This game is admirably unafraid to make you earn every literal inch of progression through its waterlogged swamps, muddy bogs, and snow-covered trails, although it’s slightly let down by an occasionally aggravating chase camera, illogical upgrade hurdles, and some unnecessarily finicky menu shuffling.There’s a lot more to SnowRunner than just lugging cargo from Anytown, USA to what feels like the arse-end of the Earth. Unlike most games infamous for their immense difficulty, however, doing well in SnowRunner is less a matter of your lightning-quick reflexes and more a test of your patience and decision-making skills. Success means you brought the right tool for the job, managed your fuel, and picked an appropriate route. Failure is the result of underestimating an obstacle, hurrying too much, or biting off more than you can chew.

Drive smart and this world can be tamed. Drive dumb and you’re a lawn ornament.

And that’s easy to do! Mud will suck trucks into the ground, deep water will knock out engines, and steep grades will roll semis sideways. Bound by the same heavy-handling dynamics and physics-based, deformable ground materials that have underpinned its predecessors – MudRunner and Spintires – SnowRunner is punishing and sometimes merciless, but rarely outright unfair. Drive smart and this world can be tamed. Drive dumb and you’re a lawn ornament.

Truckin’ in the Bushes

SnowRunner sets you and your trucks loose in an array of distinct environments, from muddy Michigan to snap-frozen Alaska and, finally, Taymyr in Russia. They’re larger than the maps in MudRunner, so there’s much more ground to cover. There’s also a vast assortment of new cargo types, which are weaved into the context of more varied objectives. A fallen bridge may need steel and timber to be rebuilt, while a local facility may be after food or fuel. Outside of delivery work there are stranded trailers to return, drowned and broken trucks to rescue, and other odd jobs to complete. Considering how long it can take to negotiate a single, slippery hill with a full load, there are dozens and dozens of hours of trucking time here. Hundreds, probably.I do, however, find it pretty annoying the objective system isn’t intuitive enough to automatically prompt a change in mission if you veer off from a planned route to, say, tug a missing trailer from a swamp and return it to its owner. You either have to go to your task lists – of which there are multiple – find the mission manually, and activate it from there, or activate the mission itself from the destination before it lets you drop it off.

Unsurprisingly, completing objectives earns cash for brand-new, better trucks more suited to taming the harsh maps. There are, however, decent trucks hidden on the maps already, and I focused on finding them to add to my garage rather than buying new ones as the payouts are a little stingy and standard missions can’t be replayed for more credits (though there are certain timed delivery challenges that can be repeated).

Cash can also be injected into upgrades for your trucks, but it seems a bit daft that certain, utilitarian upgrades are locked until you hit the required level. It’s a fine enough way to reward progress through an arcade racer, for instance, but it makes little sense in a straight-laced, all-terrain delivery simulator to arbitrarily prevent you from buying off-road tyres you could otherwise afford.

Truck The Pain Away

The biggest disappointment is that the handling of the small, lighter scout vehicles – like SUVs and utes – isn’t great. They’re fine enough in the mud and muck but on level surfaces the rear feels strangely disconnected from the ground at times, almost as if the back wheels are strafing left and right. They sound surprisingly toothless, too; mash the throttle and they just drone up through the rev range before changing gears endlessly.

The truck handling physics are satisfyingly hulking and heavy.

Happily, the truck handling physics are satisfyingly hulking and heavy, and the nature of SnowRunner’s objectives will demand you spend much more time in these good-looking and better-sounding vehicles. Whether clattering over the rutted roads or slowly clawing through slop, the sense of bulk in SnowRunner’s big boys is translated very well. The camera can jump around jarringly when hauling long trailers, though, and it’s also probably worth noting that, if you bought this on disc at retail, the ability to invert the Y axis for the camera only arrived in the day-one patch. If this is a must for you, this patch is essential. Playing uninverted was turning my brain to mush.

SnowRunner can be played from start to finish in four-player co-op and some missions in particular feel like they were very much designed for co-op rather than solo play. Rolling, wrecking, or running out of fuel in the maps with no player garages to respawn to is a particularly lonely experience; having a convoy of fellow truckers on standby will go a long way to make SnowRunner’s most isolated objectives less intimidating.