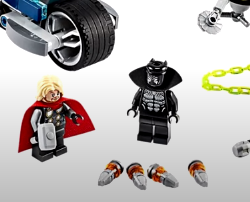 A range of recently unveiled LEGO sets could hint at a variety of new characters for the upcoming Marvel’s Avengers.

The supposed leak was shared on Twitter, where it was documented that four new heroes and one new villain could be coming to Crystal Dynamics’ Marvel’s Avengers. Whether or not that means at launch or further down the line is unclear, as is the role – if any – they will play in the main story. Regardless, you can check out the tweet below.

SPOILER ALERT: Four upcoming characters and one villain for Marvel’s Avengers have leaked through LEGO sets.

Some people in the replies have disagreed with the rationale behind the supposed leak, arguing that characters added to affiliate LEGO sets aren’t necessarily guaranteed to appear in related properties. The original poster was quick to retaliate, noting that although it’s common to add landscapes and vehicles to LEGO sets, it’s rare to see unrelated characters included for no reason.

Those LEGO sets still contained the characters that were present in the movie.

Over on ResetEra, fans are excited about the inclusion of MODOK (Mental/Mobile/Mechanized Organism Designed Only for Killing) in the LEGO sets, and the implication that he too will be included in Marvel’s Avengers.

For those who don’t know, MODOK is a supervillain most associated with AIM (Advanced Idea Mechanics), the institution that happens to serve as an antagonist in Crystal Dynamics’ upcoming Avengers game, further accentuating the potential legitimacy of the supposed leak. In the past, MODOK has shared rivalries with major Marvel heroes such as Captain America and Hulk, who are both already confirmed for the game.