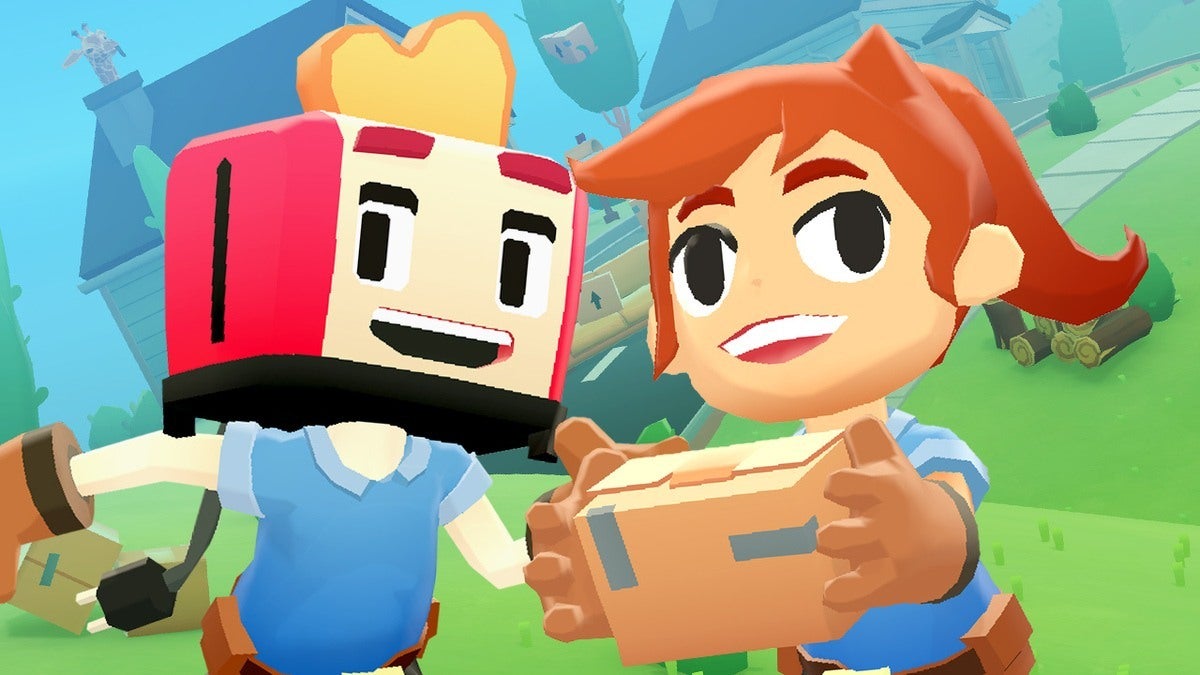 Helping friends move house is widely regarded as one of the worst ways you can spend a Saturday, but somehow developer SMG Studio has taken that most dreaded of friendly favours and transformed it into fantastically frantic fun. Moving Out is a couch co-op game about cooperatively moving couches, successfully expanding Overcooked’s brand of coordinated chaos from the kitchen into every other room in the house. Often tense and frequently hysterical, Moving Out is a must-play for fans of same-screen multiplayer games.

Casting up to four players as employees of the Smooth Moves company, Moving Out features 30 main levels across its small-town setting. Each location has gold, silver, and bronze-tiered time limits to target as you scramble to gather up all of the boxes, appliances, and stubbornly shaped pieces of furniture scattered about each level and ferry them to the back of the removalist truck. It’s a fairly straightforward task to bungle your way to a bronze like a bull in a china shop, but grabbing a gold requires a strategic approach to room order, considered job delegation, and precise pathfinding to ensure maximum efficiency.

Precious seconds tick away on the clock and the language between you and your frazzled team of moving mates grows increasingly more colourful.

The controls are simple, with buttons for grabbing, throwing, and jumping, but the challenge is presented by the unique properties of the objects themselves. Television sets are typically tethered to walls by their power cords, which stretch and snap as you carry the TV out and lurch you into a spin; large L-shaped lounges slow you and your moving partner down to a sluggish waltz as you inch your way through narrow doorways; and upright pianos flip over on their side if you try to take a corner too quickly, all while precious seconds tick away on the clock and the language between you and your frazzled team of moving mates grows increasingly more colourful.

Just when you think you’ve wrangled your inept assembly line into order, Moving Out drops new elements into the mix to add game-changing wrinkles. A farmyard level means your cargo isn’t just bulky, but mobile, leaving you to chase chickens and push pigs that seemingly want to be anywhere but the back of your truck. Elsewhere, a large factory requires you to navigate a series of conveyor belts through interconnected rooms, while a set of door switches in another facility forces you to open and close different paths and strategise your way to your objectives on the fly.

It’s absolutely manic, but successfully executing a plan is utterly exhilarating. Corners can be cut if you’re willing to take risks by throwing and catching fragile items from one player to another, or heaving a refrigerator out of a second-storey window instead of dragging it down the stairs. Even the order in which you load the truck is an art unto itself. Use up all the flatbed floorspace with smaller items first, and you won’t know whether to laugh or cry as the double bed you hurl onto the top of the pile to finish the job tumbles right back out of the truck, further delaying your exit. Moving Out seems shambolic at its start, but demands real thought, coordination, and planning by its end.

In addition to the reward of getting gold-medal times, I also enjoyed returning to each level for the bonus objectives. Each one has three optional tasks – some of which are clear, such as completing a job without breaking any windows – while others are more cryptic, not unlike those found in Untitled Goose Game. Those require you to experiment with the various objects and contraptions found within each setting, for example the objective may be to ‘Give the bird a bath’ and to achieve it you need to find a decorative pink flamingo somewhere in the level and hurl it into the bathtub. Successfully completing these 90 objectives unlocks 10 extra mini-games in the arcade menu, which is a series of timed gauntlet runs that provide some of the most fiercely challenging cargo-shunting stretches in Moving Out.

Yet even during its most patience-testing moments, it’s impossible to stay mad at Moving Out because its ‘80s-influenced style is so endearing. Its characters and settings are vibrant, its soundtrack is relentlessly upbeat, and it features levels that pay clever homage to the likes of Frogger, Pac-Man, and Bowser’s castle from Super Mario Bros. There’s a certain goofball charm that pervades Moving Out, from the shifty-eyed cat clocks that seem to adorn the walls of every house to the way the characters occasionally fart from the exertion of lifting particularly heavy loads.

There’s a certain goofball charm that pervades Moving Out.

Moving Out is undoubtedly at its best with buddies. It’s technically playable in single-player, with the number of items in each level reduced and the heavier objects made lighter in order to better suit solo play. However, packing the contents of a house into a truck with your own two hands is about as much fun as it sounds, and it’s only now after finishing the game’s story as a quartet (which took about eight hours) am I playing on my lonesome purely to try and grab any remaining golds for the sake of completion. Additionally, while my preference would be to play Moving Out with friends locally anyway, it’s worth pointing out that there’s no online functionality — so those hoping for the option of playing with friends remotely (which is kind of important right now) are likely to be disappointed.