First and foremost, yes, Rainbow Islands absolutely did come out on PC. Taito’s 1987 sequel to the far more ubiquitous Bubble Bobble eventually reached our waters some 17 years later via Empire Interactive’s Xplosiv label. All but another 17 years later, I felt absolutely compelled to give it another play, driven by the fondest childhood memories of spending countless hours in its super-colourful world.

Games were so damned hard in the ’80s.

Rainbow Islands, to all intents and purposes, looks like a children’s game. Bub, or Bob, former dragon-shaped stars of Bubble Bobble, are returned to their human form and on a quest to climb ever-upward via their magical rainbow bridges, to rescue the Rainbow Islands from the clutches of the Dark Shadow. It’s almost insufferably cute, with its array of adorable enemy creatures, sweetie and pudding pick-ups, and chubby-faced protagonists. Indeed, so much of my after-school-but-before-dad-got-home time was spent playing this on our Atari ST when I was 10 years old. Which makes just how absolutely terrible I am at it today all the more shameful. 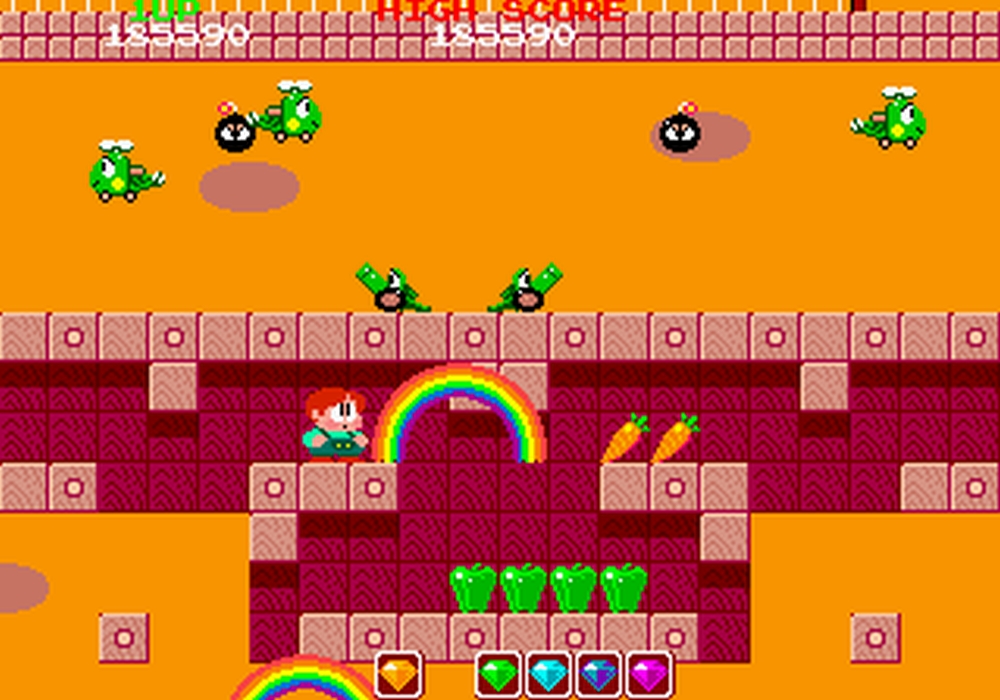 Rainbow Islands is a sublimely good platform game. Its mechanics are few, but so brilliantly realised that it shames most of your modern platform darlings. You jump, or you cast rainbows. Rainbows can also be run up, then jumped off, to create bridges through the sky. But they’re also your only weapon, transforming enemies on contact into delicious treats. Better yet, cast one over the top of an enemy, then jump onto the bow, and they’re changed into a bonus item, such as collectable diamonds, speedy shoes, or most crucially, potions that let you fire your rainbow more quickly, or build up to double or triple rainbows. Oh, and you can collect such items using rainbows too. All these elements combined, from just two buttons, create an elaborate and complicated means of interaction that allows for impressively tactical play.

For instance, you can create cascading chains of rainbows, where jumping on one at the top causes a chain reaction that takes about a whole screen of enemies at once, filling it with vital pick-ups. I mean, you could if you weren’t cack-handed me, desperately flailing about and inevitably bumping into a baddie the moment I’ve boosted my rainbow powers into anything useful. 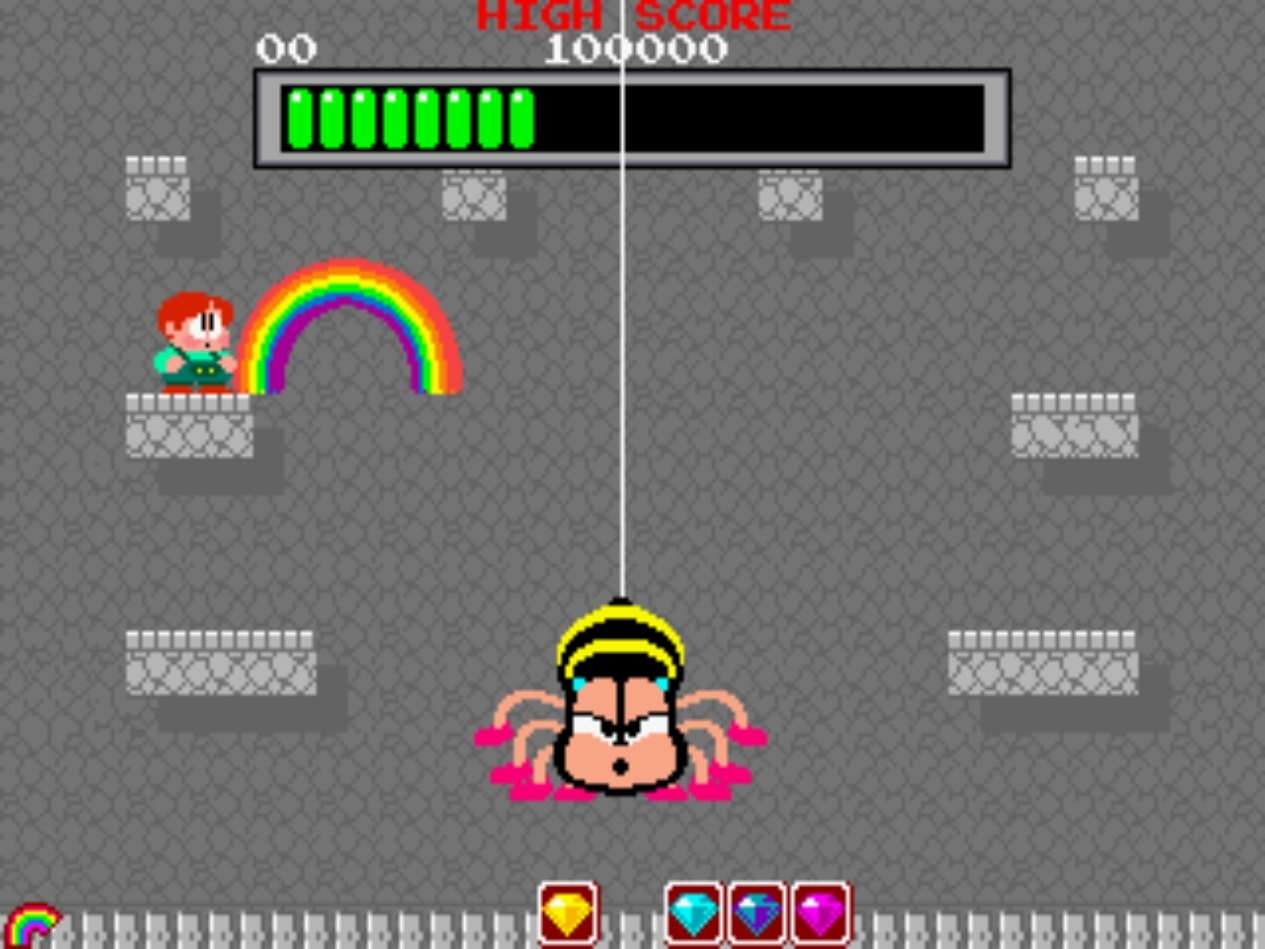 I think that further emphasises to me what a good game this is. If I had the patience and the wherewithal, this is a game I could get good at. Because of course like so many of Taito’s games, it was designed for an arcade cabinet, and therefore the consumption of coins. It’s a game that encourages the development of skill within its relatively few levels (four short vertical levels on each of the ten islands). And while its difficulty certainly trends strongly toward the much easier end of that market, it’s really not the cutesy bouncy kids game I’d wrongly remembered.

Which is to say, I failed at it. A lot. And, as it turns out, this was true when I was 10 too. I know this because when I finally was able to reach Round 13 on the fourth island, I realised I’d never seen it before in my life! 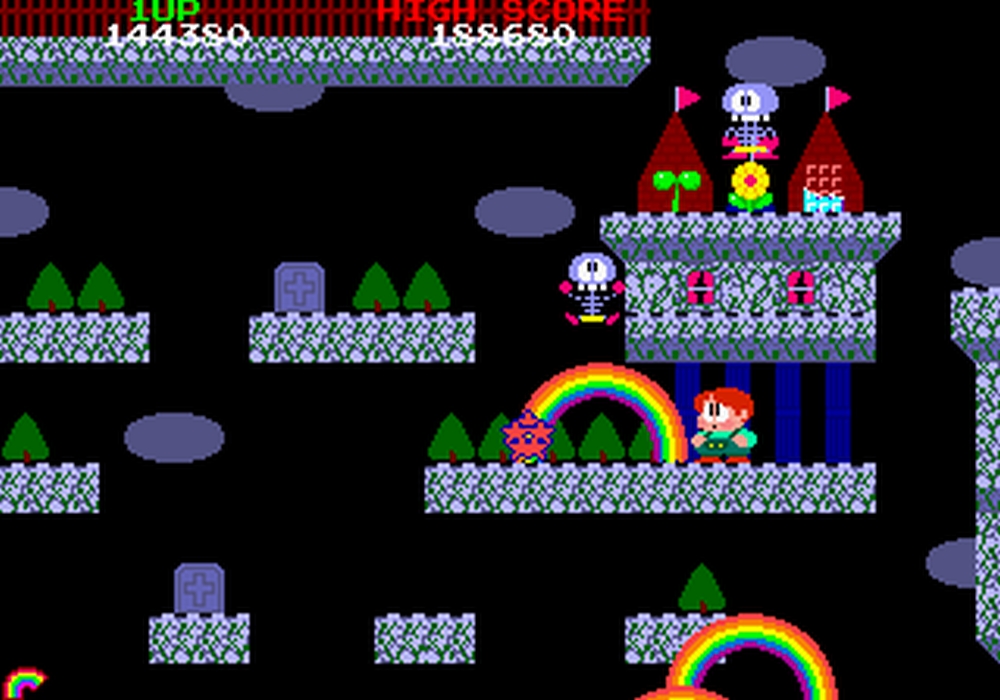 At 10 years old I can only have merrily played the first twelve levels of this game again and again and again, never managing to defeat the vampire boss fight at the end of Round 12. And wow, I remembered every detail of it with extraordinary fidelity. This is so deeply unlike me! There are games I played last year that I can barely remember. But here there wasn’t a section that surprised me, the entire process one of a deep soaking nostalgia, every enemy type, pick-up, bonus item, all indelibly burned into my consciousness. Until I reached Toy Island and didn’t recognise a single thing.

What’s so ridiculous about this is how bizarrely easy the vampire boss is to beat. You climb to the top of the screen, fire off as many rainbows as you can, and then crash them all down on him. Dodge his mini-vamps just once, then repeat and win. Ten year old me was an idiot! In other news, 42 year old me is an idiot, because Toy Island began to really test my patience, and people, I’m sorry, but I gave up on Round 16. So yes, it seems like I’m going to have to wait until I’m 74 before I’ll ever see Doh’s Island, and live to the giddy age of 234 before I finish the whole game. RPS will still be here in 2212, right? I’ll report back. 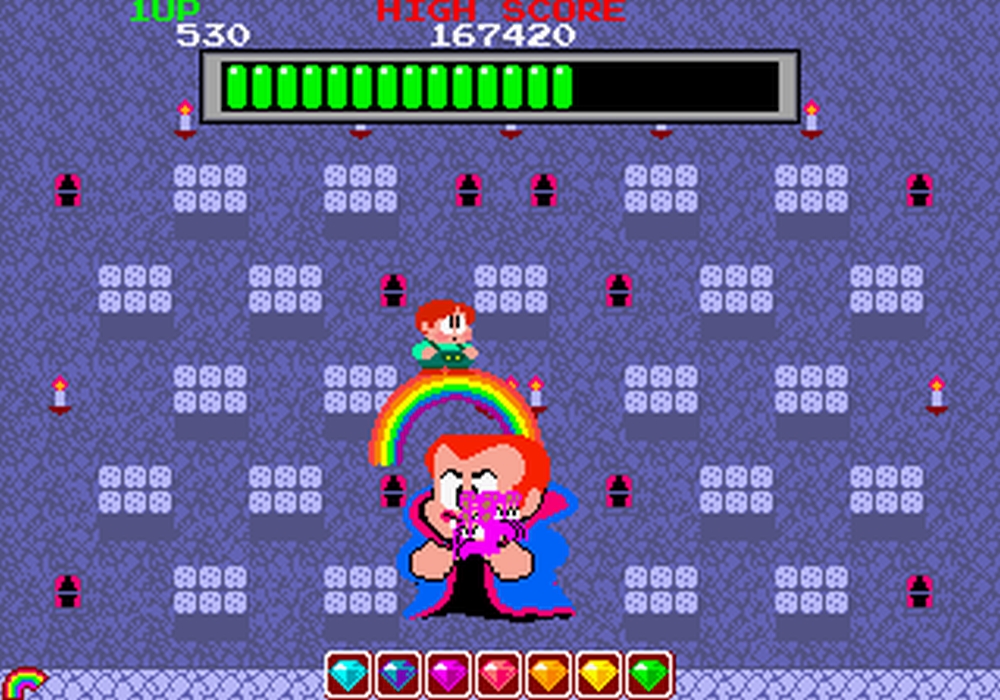 Every island is so gorgeously unique, with a completely new cast of enemy types, with unique behaviours to learn. They’re all gorgeous, and the game is a constant source of smiles. And bellows of frustration. And I am just in awe of my ten-year-old self for that.

How is it that at such an age I was content to replay and replay and replay the same few levels of a game so very, very often? I was lucky enough to have a gaming father, so while we weren’t exactly piling them up, there wasn’t a shortage of arcade options. I’d swap between Rainbow Islands, Marble Madness, Nebulous, Zany Golf, Impossible Mission II, Buggy Boy and of course Bubble Bobble. (We didn’t inevitably, er, own all of them.) I’d be terrible at all of them, with perhaps the exception of Bubble Bobble, which was amazing in co-op with my friend Alistair. (Although we never got past level 65 due to something something piracy measures something.) I’d persist with one for a while, presumably fail enough times to become frustrated, and then switch out the floppy disc, wave the buzzy bee cursor about until the next was loaded, and then fail at that one next. It’s just not a way I can tolerate playing any more.

Hey, but at least I’ve made progress, right? 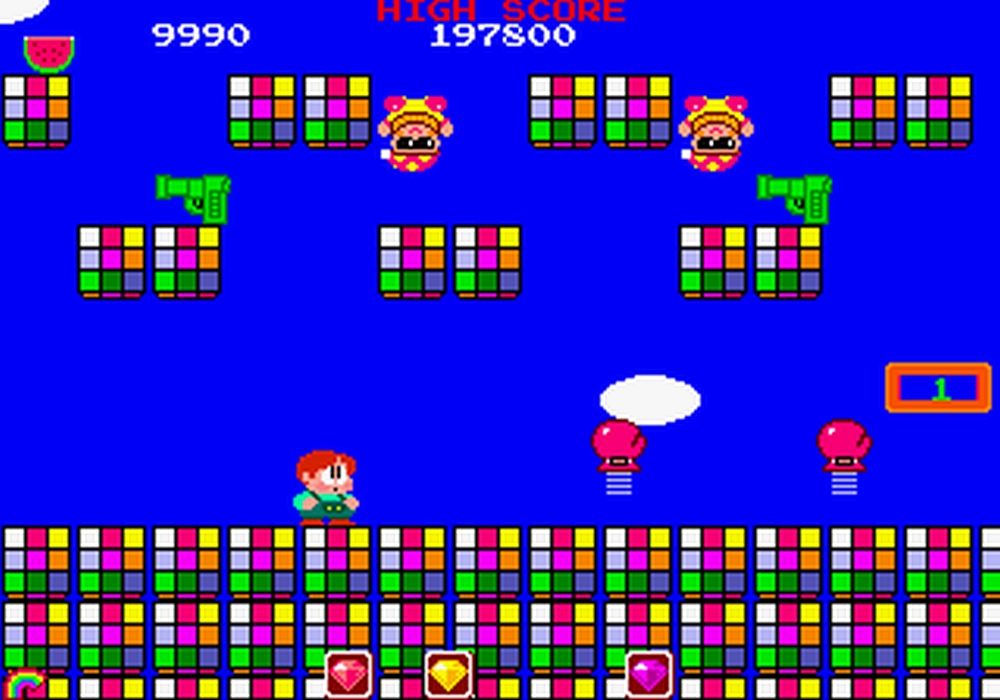 Can I still play Rainbow Islands?

Not easily, but yes. There are a fair few copies of the Xplosiv PC release knocking about on eBay and the like, although being from 2003 you’ll likely need a virtual machine running Windows XP to avoid the worst issues. And of course there are many ways to play it on MAME.

Should I still play Rainbow Islands?

If you’re able, then yeah, I really think so! Especially if you’re a platform developer. I think the mechanics behind those rainbows, and the number of ways they’re used in the game right from the start, has a huge amount to teach.

John Walker was one of the original creators of RPS, before he was fired for being too great. He now runs Buried Treasure, a site dedicated to unknown indie games. You can support his Patreon!