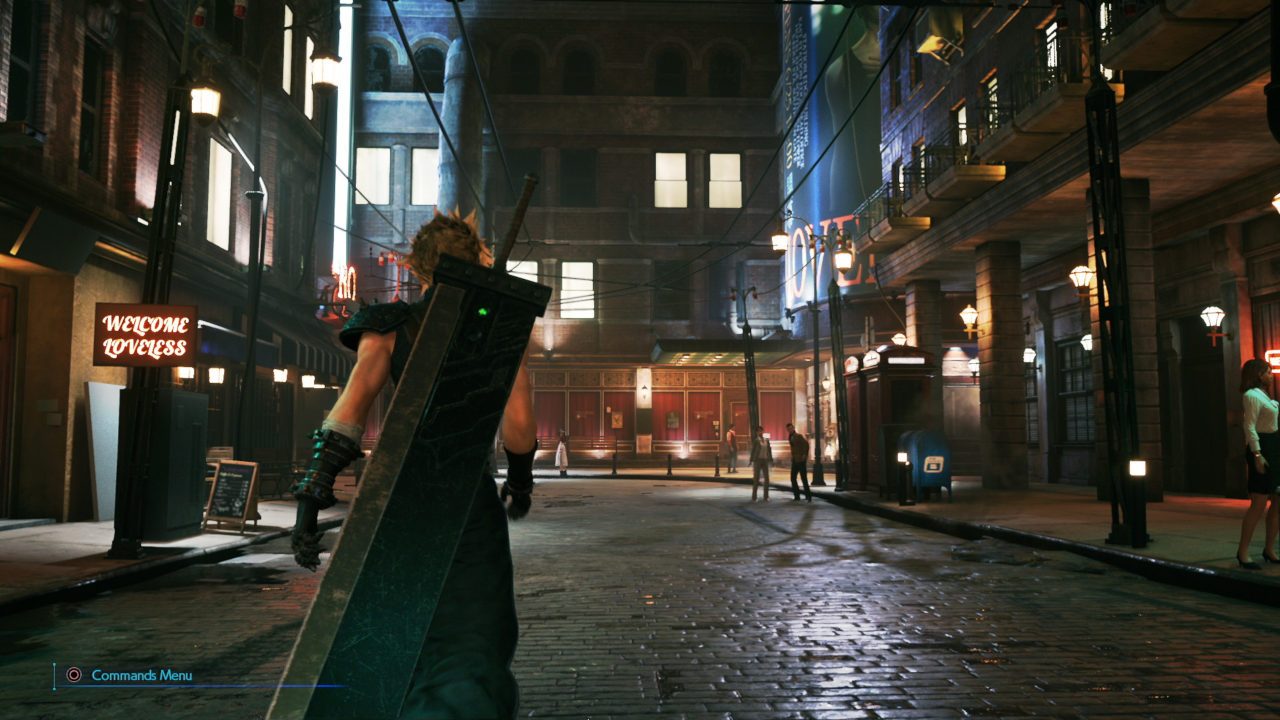 Taking on an organization as powerful as the Shinra Electric Power Company won’t be easy — even with a former SOLDIER on your side. But don’t worry — we’re here to help. We’ve put together 7 (see what we did there?) top tips to help you make the most of your trip to Midgar. 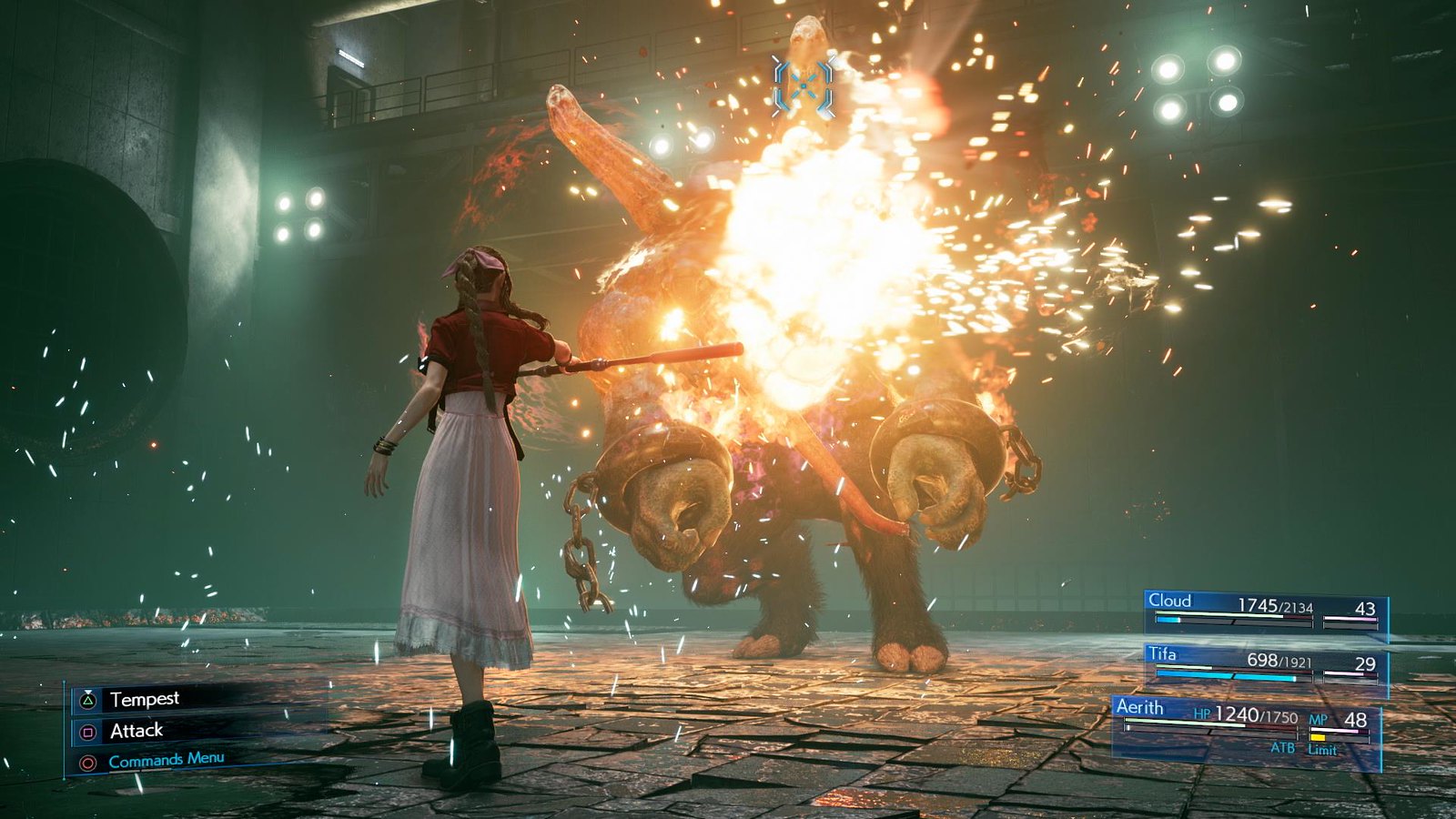 Final Fantasy VII Remake’s combat system revolves around ATB. As you battle, two bars will fill up beneath the characters’ HP indicators. When one of these is full, you can spend it on an ability, spell or item.

Standard attacks don’t do much damage, but they do fill up the ATB gauges faster so you can issue more commands. Switching between characters regularly also helps, as your input will fill their gauges faster too.

When you have ATB available, use it because these spells and abilities are the best way to cause damage to enemies.

2. Remember that you can block

There are two basic defensive techniques available from the start of Final Fantasy VII Remake: a block and a dodge-roll.

If you block, you’ll take reduced damage from enemy attacks. Rolling away, on the other hand, can negate damage entirely. With that in mind, you’d be forgiven for assuming that the dodge-roll is always the best option. It’s not.

For one thing, the timing can be quite tricky — if the enemy lands a hit, you’re going to suffer the full effect. Blocking the attack is much more reliable and is often the safer tactic — particularly if you’re facing a speedy foe like the Shinra Shock Troopers.

Blocking has other useful effects too. Some enemies have attacks that knock you off your feet, but blocking often negates this effect. While you will take a little bit of damage, it leaves you close enough to counterattack very quickly.

Also worth noting is that if you block a melee attack while Cloud is in Punisher mode (activated by pressing triangle), he will retaliate with a powerful counter. This is fantastic against certain enemies – like the afore-mentioned Shock Troopers. 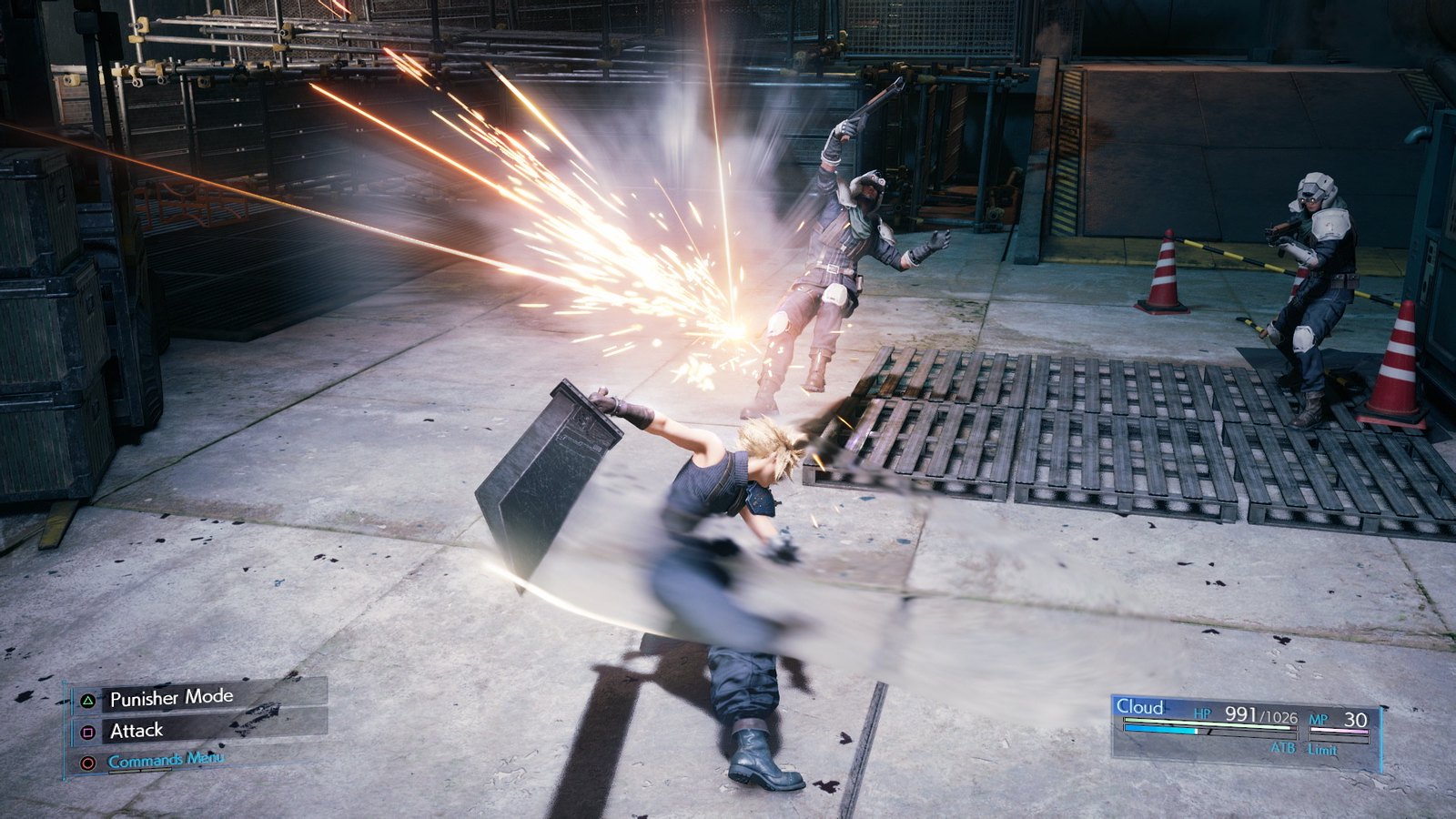 The denizens of Midgar are dangerous — many can deliver dramatic damage to your party. So make sure you enter every fight in tip-top shape.

You can heal in battle with magic or items, but this will cost you a bar of ATB. That means that if you dive into the fray with your HP in the red, you may be taken out before you have a chance to even issue a command.

Fortunately, you can use items and magic freely outside of battle, so make sure you take a few seconds to heal up when you get a break in the action.

Many enemies are weak against certain elements — if you can hit them with one of these attacks, they’ll definitely feel it.

In the introductory sections of the game, a good rule of thumb is that if the enemy is mechanical, they’re likely weak to electrical attacks. Squishy, fleshy organic beings, on the other hand, won’t like fire.

Past the opening stages though, things get a lot more complicated. You’ll have to experiment with different types of attacks to uncover what works on what enemy.

That said, you can get a bit of assistance. At some point in the adventure, you’ll be able to acquire the Assess Materia. When equipped, you’ll be able to use it to see a detailed view of your foes’ various vulnerabilities. It’s very handy! 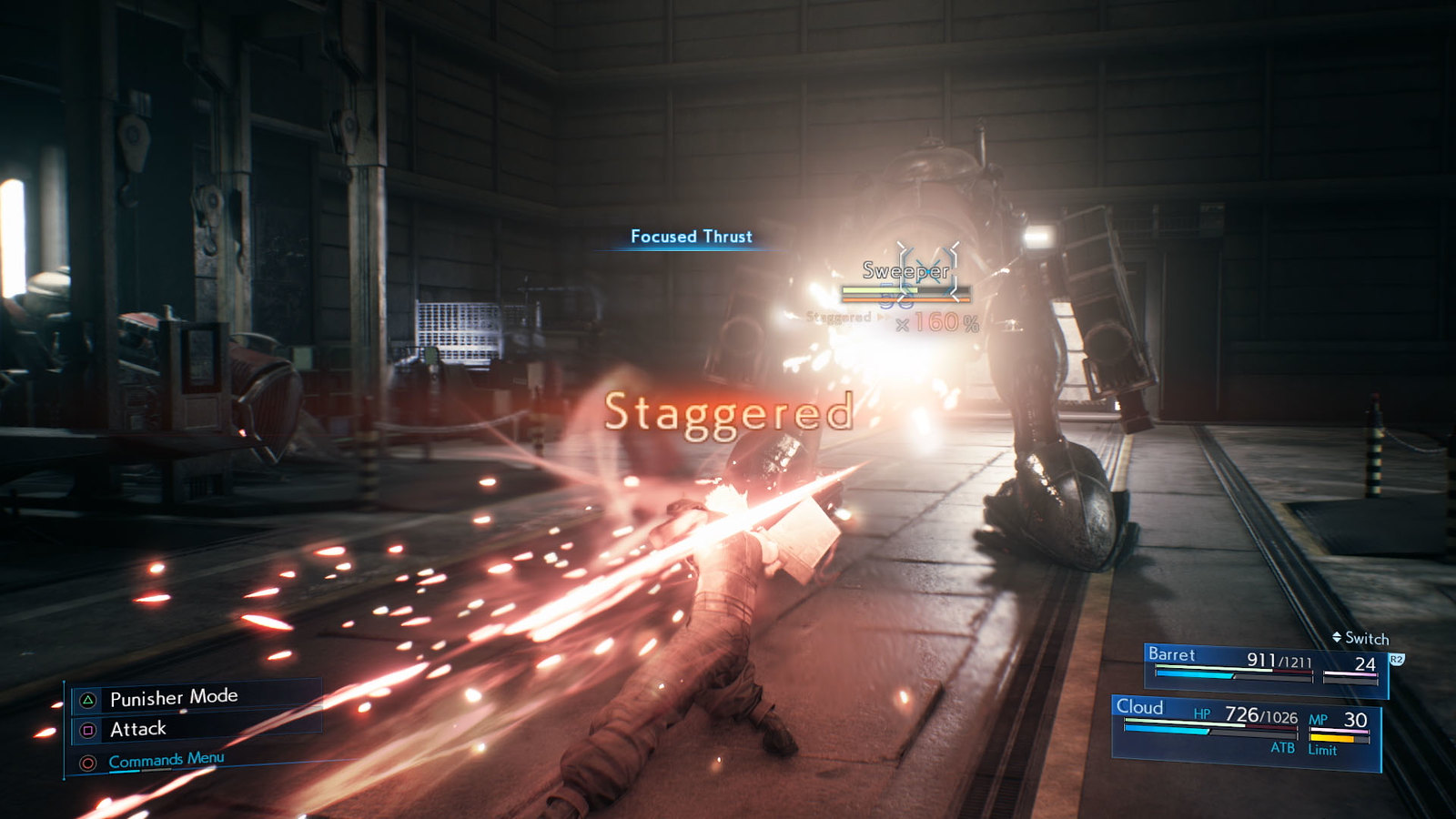 5. Understand how to stagger

If you want to really dominate in battle, you must learn how to stagger enemies.

As you fight, a stagger gauge beneath your opponent’s health meter will fill up. When this maxes out, not only will your foe be unable to attack you, all of your hits will deal much more damage!

Staggering is very powerful, so it’s useful to understand the basics of how you can fill that meter.

A good first step is to deal a lot of damage to the foe very quickly, so try to coordinate your party’s spells or abilities to hit in quick succession. If you do a lot of damage in a short time, your foe may enter a ‘Pressured’ state.

While Pressured, your target’s stagger bar will fill up much quicker than usual, so use stagger-building attacks like Cloud’s Focused Thrust and Barret’s Focused Shot to max it out fast.

Of course, things are not always quite that simple. Some enemies are easier to stagger than others, so you’ll have to experiment with your ever-expanding options in battle to develop strategies that work for different encounters.

6. Take the time to explore Midgar

Final Fantasy VII Remake typically points you to your current objective, but most of the time, there’s no need to rush. Make sure you explore and look around — not just because Midgar is often staggeringly beautiful, but because it’s also stuffed full of things to find.

From restorative items, to MP-regenerating Mako shards, to music discs that you can play on a jukebox… there’s all sorts of goodies hidden away.

What’s more, many of them will make your adventures easier, or help you out of a difficult situation, so it’s well worth going out of your way to poke around at the corners of the world. 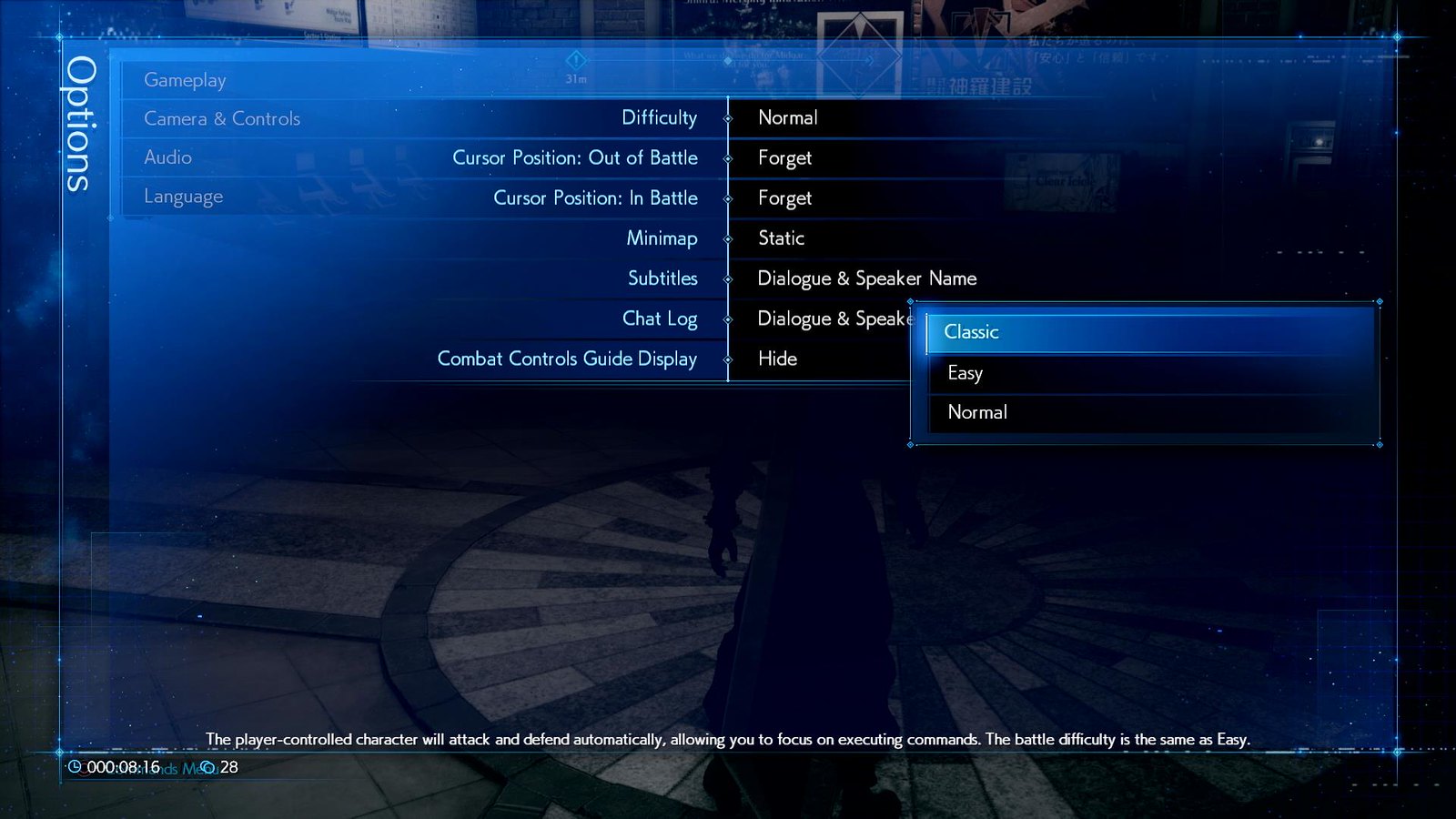 If you’re not a big fan of action mechanics, or merely want a change of pace, you should try out Classic Mode. You can activate this from the System menu.

In this mode, characters move, attack and defend automatically, so you can focus entirely on giving them instructions via the Command Menu. Because you don’t have to focus on standard attacks and blocks, you have more time to consider your overall strategy.

It’s a little bit reminiscent of the menu-based system of the original Final Fantasy VII, so fans of that game will hopefully enjoy it too.