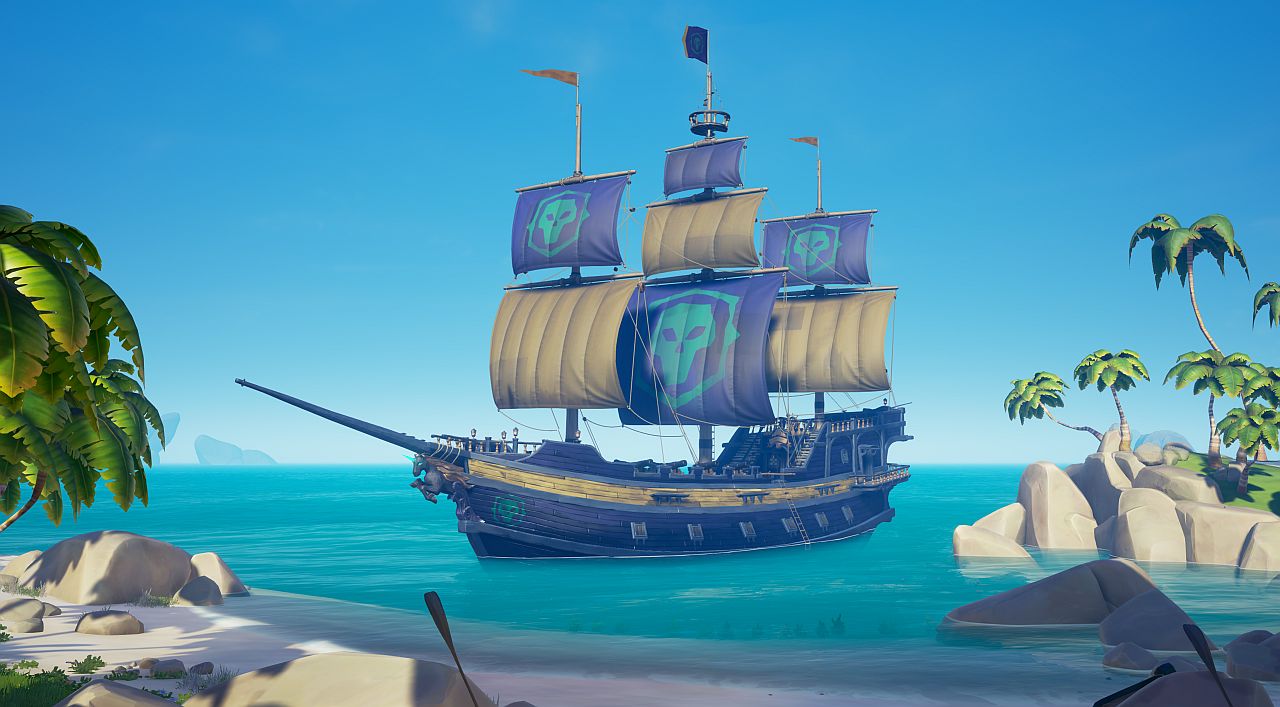 The next free update to Sea of Thieves is Ships of Fortune and it releases on April 22.

In the content update for Sea of Thieves, you have the option of becoming an emissary to one of the trading companies when Ships of Fortune releases.

Whether you choose Gold Hoarders, Merchant Alliance, Order of Souls or Athena’s Fortune, your special duty will allow you to earn boosted rewards from usual voyages plus new cosmetic rewards for performing well.

To become an emissary for one of the Outpost Trading Companies, you will need to speak with a representative at the Outposts and inspect the nearby table. Since the roles are “highly prized,” you will need to make a large donation to be handed the privilege.

You will be able to advance through five grades by representing your company by finding chests as a Gold Hoarder. The higher your grade, the bigger the multiplier you’ll get when cashing in your haul. Of course, other pirates will know that an emissary’s ship is likely to be loaded down with loot so you better be on your guard.

Dress your ship up in your company of choice, and then prove your skills against other players in the competitive Emissary Ledger. Here you will be able to earn titles to increase your standing and compare your progress to that of others.

While sailing as an emissary you will get noticed by rivals, especially that of a new trading company called The Reaper’s Bones. The emissaries of this company have one objective: to take their rivals out and abscond with rival Emissary Flags as trophies.

The new company can be found at The Reaper’s Hideout if you would rather join it instead of the others.

Included with the new update are overhauled matches in the dedicated Arena mode. Old treasure maps have been replaced by a single chest marked by a Sea Dog Beacon, with just one cash-in location. Contest times are now only 15 minutes long.

Rare is also adding a new way for crews to look out for one another. Now, when pirates are defeated, there will be a brief window allowing crewmates to revive them before they are whisked off to the Ferry of the Damned. This should allow for quicker gameplay loops as well as some “new tactical choices for co-operative crews.”

If you are tired of parrots and monkeys as pets, the Pirate Emporium will now have cats. There are three breeds of felines available: the Wildcat, Ragamuffin, and  Mau. There are a variety of color options for each, and you can even dress them up in outfits, some Legendary.

Elsewhere in the Emporium, you can also pick up the Night Wulf Ship Collection, and “crabby” new emotes.

For more information on the Ships of Fortune update, including full release notes, visit the Sea of Thieves website.