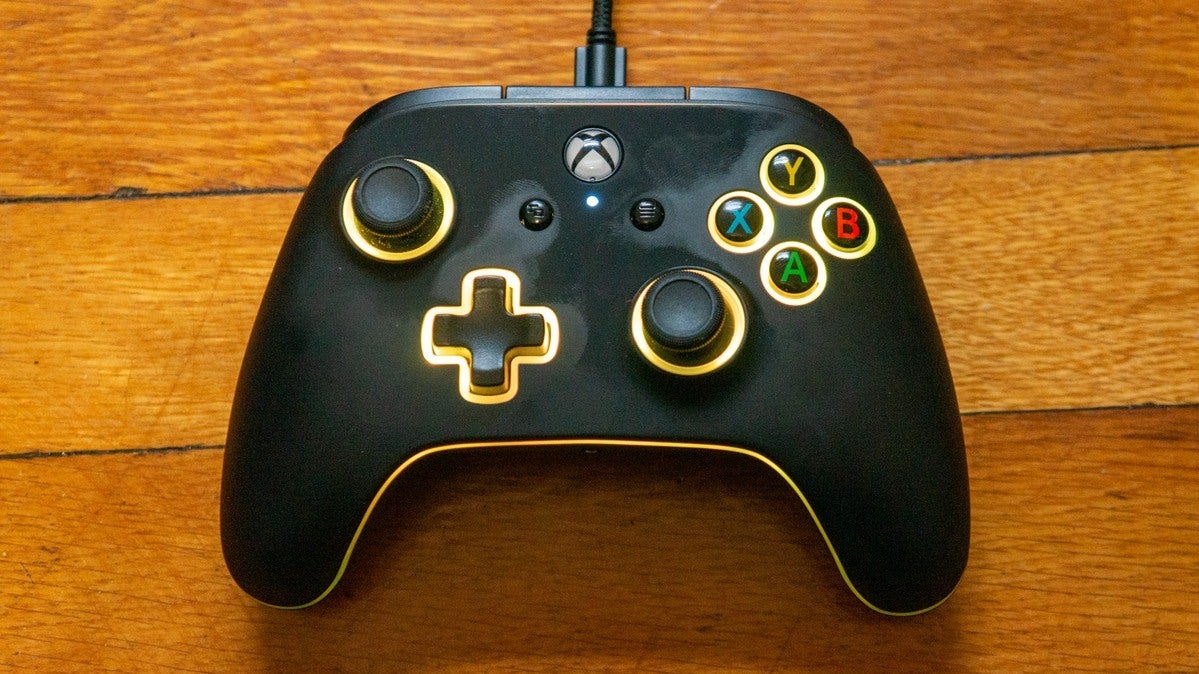 There’s a USB port at the front as well, which isn’t just for occasional use. This is a wired-only controller. There are pros and cons to that. The wired connection is latency-free, of course, and also cuts out the price of a battery and the need to keep it charged up. For PC gamers, that’s a perk over the standard Xbox One controller, which needed fully-charged batteries even when you were playing with a wired connection.

The cable and micro USB port on the Spectra Enhanced are also far superior to Microsoft’s design. It comes with a braided cable with a quick disconnect near one end so you won’t accidentally yank your PC or console. And it uses a recessed, locking connection for the port on the controller. I never once had the connection come loose, something I can’t say has been true of my Xbox One controller.

You get all the same buttons as the Xbox One controller (minus the wireless pairing button), but the Spectra Enhanced takes it further with two mappable buttons on the back. These work like the buttons you’d find on the Xbox Elite Series 2 controller, except this controller costs a quarter of the price. Also like the Elite, it has three-way trigger locks, which can shorten the travel distance of the triggers for quicker tapping.

The Spectra Enhanced also gets the RGB treatment, with lighting around all of the face controls and the entire edge of the device. There are seven colors available as well as a mode that cycles between each color. It doesn’t look half bad, and it’s easy enough to turn the light off if RGB isn’t your thing.

PowerA has made a few other changes from the earlier Spectra controller. The Spectra Enhanced now includes a built-in headphone jack and uses a soft-touch finish that, while more prone to show greasiness, is pleasant to the touch.

The PowerA Spectra Enhanced has custom lighting and remappable buttons, but it doesn’t require any software. An LED button on the rear allows quick cycling between colors, and a program button makes it easy to quickly switch which controls the rear buttons will duplicate.

I’ll be up front: The PowerA Spectra Enhanced is great if you don’t mind a wired controller. It feels just a hair thicker in the hand, which adds a touch of comfort for longer play sessions.

I took the controller on a long slog through Batman: Arkham Knight, playing more than 20 hours of the campaign. The Spectra Enhanced was there for every step, and it held up flawlessly.

From every punch to a goon’s unsuspecting head, every minute gliding over Gotham, and every high-speed turn in the Batmobile, the Spectra Enhanced delivered dependable controls. Each button felt responsive, and almost all of the buttons seemed superior to the original Xbox One controller’s. The ABXY, D-Pad, and analog stick buttons feel less mushy to press. Toward the end of the game, when I was really getting into my flow with long combos, the Spectra Enhanced didn’t miss a beat. No sticky buttons, no missed pressed – the only errors came from me thinking I could land a few more punches before needing to counter.

The only controls that don’t seem like a step up are the triggers, as they feel a bit more hollow and have a lighter spring. The trigger locks may play into that hollow feeling, but they can be a worthwhile trade-off where rapid tapping is concerned, such as semi-automatic shooting in an FPS or quick-firing Batarangs in Batman.

One issue with the trigger locks is that they don’t change the point where the trigger registers as fully depressed. So, if you used the trigger lock in a racing game, it would be like putting a brick under your accelerator. I was trying to complete a basic puzzle in Arkham Knight that required careful control of the triggers, and it took about 30 seconds for me to realize why it wasn’t working even though I had squeezed the trigger all the way down.

The back buttons take a little getting used to – it’s easy to forget they’re there since they don’t add any controls that aren’t present elsewhere – but they’re nice and poppy, making them handy and usable when I really need to keep my fingers on the thumbsticks.

The PowerA Spectra Enhanced controller is compatible with Xbox One and PC. It’s available on Amazon and Walmart with an MSRP of $40.