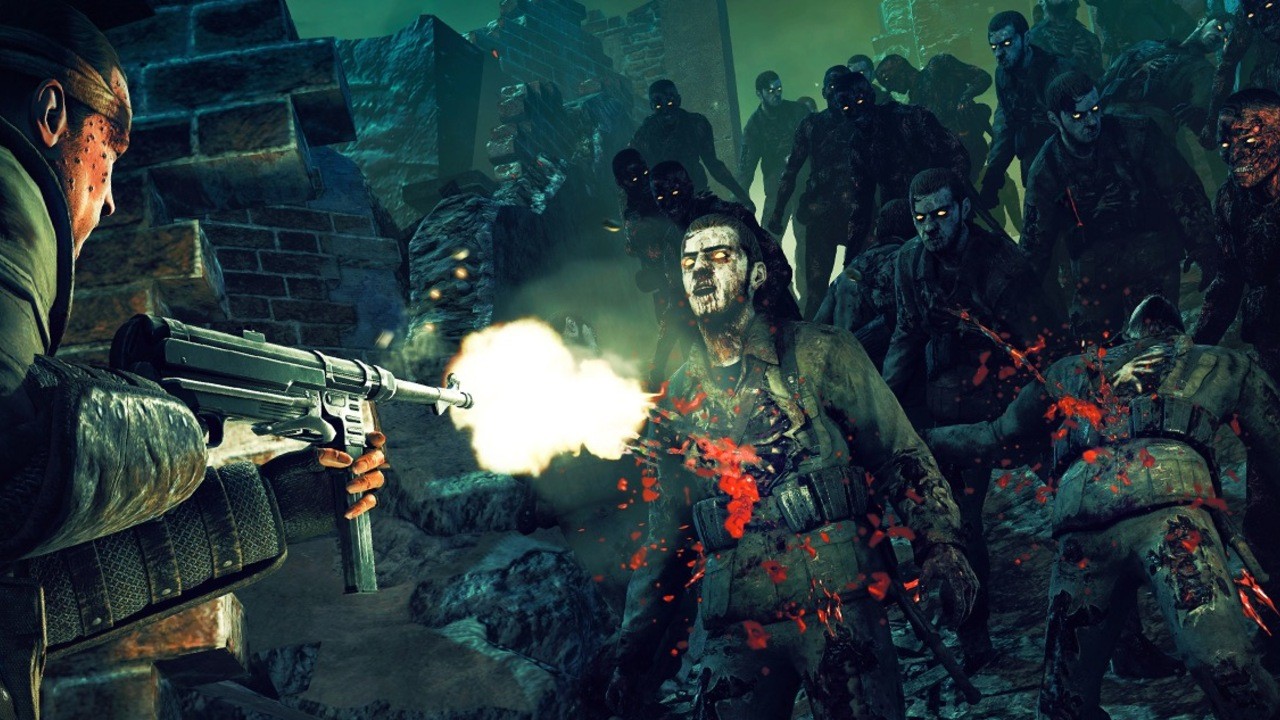 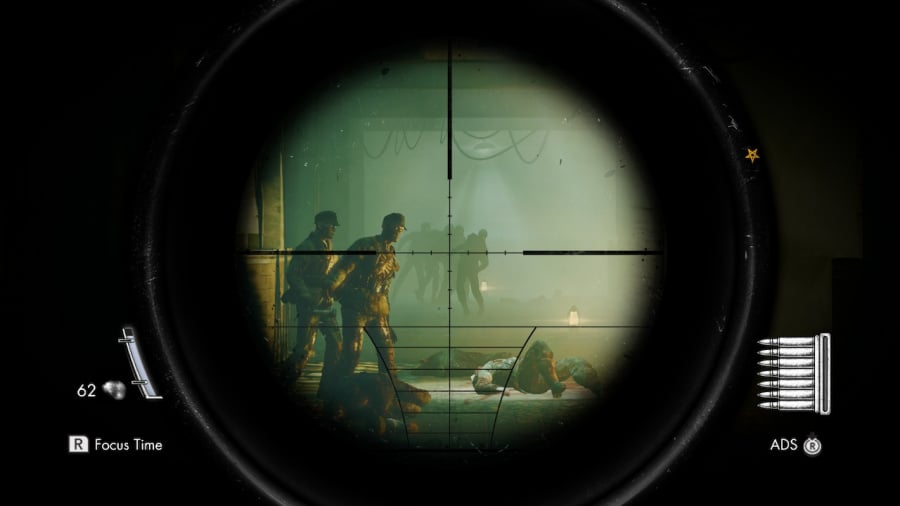 It’s 1945, World War Two is drawing to a rather bloody close and everybody’s favourite angry auntie Adolf Hitler has just been informed that it’s not looking great for him and his goose-stepping grunts. Being the level-headed Fuhrer that he is, little Adolf reacts to this news by immediately killing the messenger who uttered it and giving an order to execute Plan Z, resurrecting an army of undead Wehrmacht soldiers and setting them loose on war-torn Germany. It’s now up to you, playing solo or with up to three other players, to blast your way through the Teppichfresser’s undead task force, blowing off limbs, exploding skulls and lining up some super slow-motion sniper shots as you make your way to a final face-off with a reanimated version of Herr Wolf himself.

Zombie Army Trilogy, a spin-off of Rebellion’s excellent Sniper Elite series, arrives on Switch here some five years after its initial release, comprising three chapters of non-stop Nazi-zombie bludgeoning action set across fifteen levels and boasting a bevvy of exclusive features for Nintendo’s console – including HD Rumble support, motion controls and the option to play through the entire thing in local wireless co-op with up to three other players. This is the full-fat pulp trilogy running at 720p in handheld and 1080p docked with a rock solid framerate of 30fps, an impressive port of a game that’s got plenty of fun in store for eager stormtrooper slayers – so long as they’ve got some pals to play with. 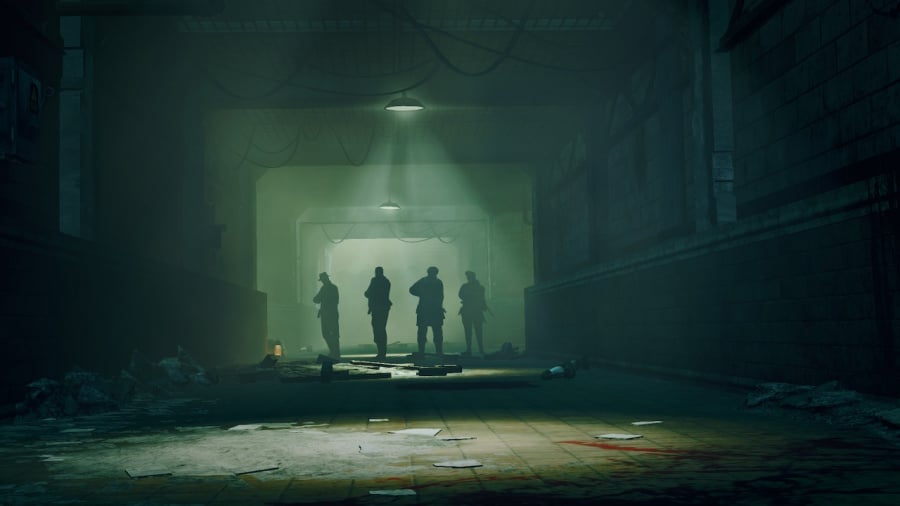 From the second you step foot in the Village of the Dead right up to the final ludicrous battle against an undead Adolf, this is a game that changes very little with regards to player input over its roughly fourteen-hour running time. What you’re tasked with doing in your first moments here, picking off hordes of shambling Nazis from range with your sniper rifle before getting up-close and personal with shotguns, machineguns, explosives and, of course, your very own boot, is exactly what you’ll be doing come the ending. Chapters do get progressively more polished as they go, with the third taking place in larger and less linear areas than the previous two – but the general flow of gameplay – running and gunning through corridors, standing your ground against waves of grunts, armoured elites, chainsaw-wielding hulks and shambling suicide bombers before taking shelter in a safe house to restock never really changes.

Played solo for any significant length of time Zombie Army Trilogy can be a pretty tiring experience as a result. As much fun as it is to get down and dirty here utilising the wonderfully gruesome slo-mo sniping mechanics exported wholesale from Sniper Elite, there’s just not enough variety to keep you engaged on your lonesome for very long. Lining up long-range headshots and sitting back as the game’s glorious kill-cam kicks in, following the trajectory of your bullet from the business end of your gun as it shreds skin and shatters skulls is still an absolute blast, but these moments are few and far between in comparison to Sniper Elite. The flow of the gameplay here only really gives you an opportunity to crouch down and pick off targets in the opening moments of levels before switching to a combat style that favours your secondary weapons – shotguns and machineguns – as well as your trip-wire traps, dynamite and mines. There’s really not much in the way of stealth or strategy, outside of racking up combos, as a result. 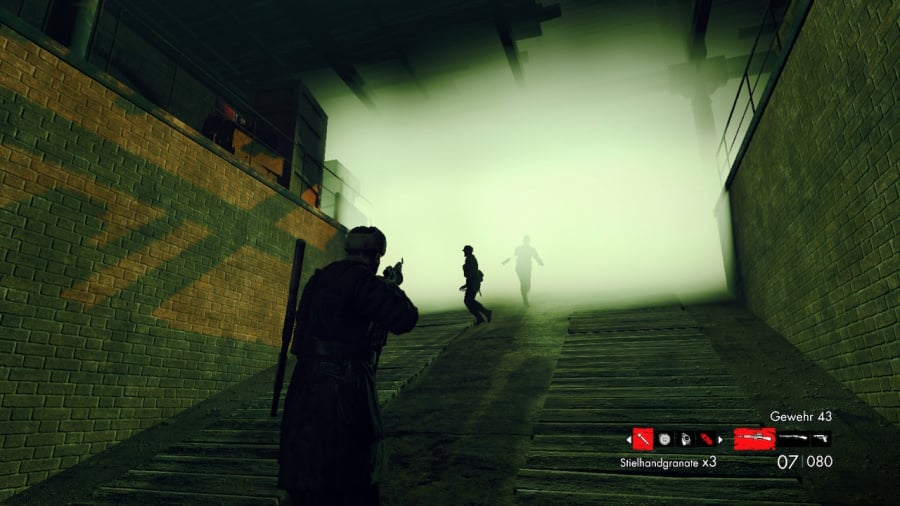 There are also a few annoying difficulty spikes for those going it alone, even on the easiest of modes with the zombie multiplier set to solo play, and we found ourselves having to replay extended chunks of battles as we got caught out in the open by some machine-gun toting zed or other with absolutely nowhere to hide from their hail of bullets. It leads to plenty of frustration as the game puts you right back to the start of your current skirmish when you die and it’s something that’s exarcerbated by the old-school nature of the game’s traversal mechanics. There’s no cover shooting, dodging or peeking around corners here and, besides the ability to crouch down behind the odd bit of scenery or mantling ledges to clamber up to higher vantage points, you’re pretty much helpless if you get overwhelmed.

Of course this isn’t a game that’s really designed to be a complex cover-shooter or played on your todd and gathering together a crew to jump into the action here is where Zombie Army Trilogy really reanimates – this is a pleasingly old-school fragfest that provides endless hours of schlocky entertainment for multiple players. Levels here may be linear – and there are zero gameplay surprises over the course of the campaign – but they’re more than adequate arenas for the multiplayer mayhem that ensues. There’s also some great atmosphere packed in, that John Carpenter-esque synth soundtrack and the occult-tinged theme of most of the areas you blast through giving the whole thing a delightfully lo-fi, video nasty vibe. Horde mode too is a much more enticing prospect with friends in tow, the monotony of facing off against endless waves alone transformed into a simple yet satisfying gore party that’s always fun to return to for a quick bit of catharsis. 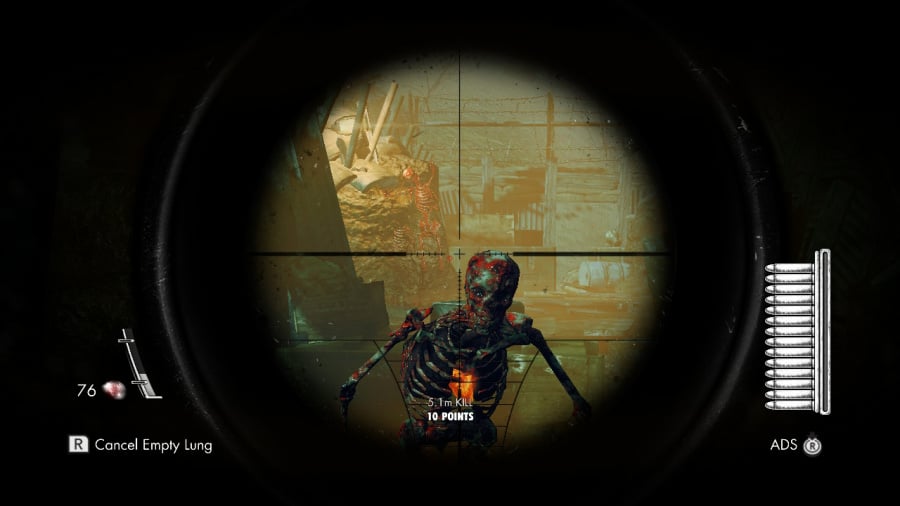 The Nazi-undead here are also gloriously detailed and all of that detail has made it over to the Switch intact. Targeting individual limbs will see them blown off in a bloody mess, heads pop like brain champagne and it’s hilarious to watch as enemies continue to try to make their way towards you, crawling desperately on their bellies in your direction as you line up a swift kick that’s certain to see their skull disappear somewhere over the horizon. As much as we may have a bone or two to pick with this one when it comes to solo play, there’s no doubt it’s a highly enjoyable and almost admirably straightforward slaughterfest when working as part of a team.

As we already mentioned, this Switch port performs flawlessly in both portable and handheld modes, the frame-rate never dipping even when the screen is filled with co-op carnage, and we had zero issues in the handful of multiplayer games we managed to find on the servers pre-launch. Indeed, it’s supremely easy to team up with randoms if you’ve got no friends to hand and any of the campaign levels can be played right from the off in any order you please – perhaps giving a little more insight into just how much the story matters here.

Zombie Army Trilogy is a solid co-op shooter with a fantastically pulpy set-up that does exactly what it sets out to, pitting you and up to three other players against an almost endless army of gloriously gory undead Nazis and letting you snipe, shotgun and kick every last one of them to pieces. It may be of somewhat limited appeal when played solo, but gather together a crew or join forces with randoms online and this one springs to life, providing countless hours of admirably straightforward skull-smashing fun.