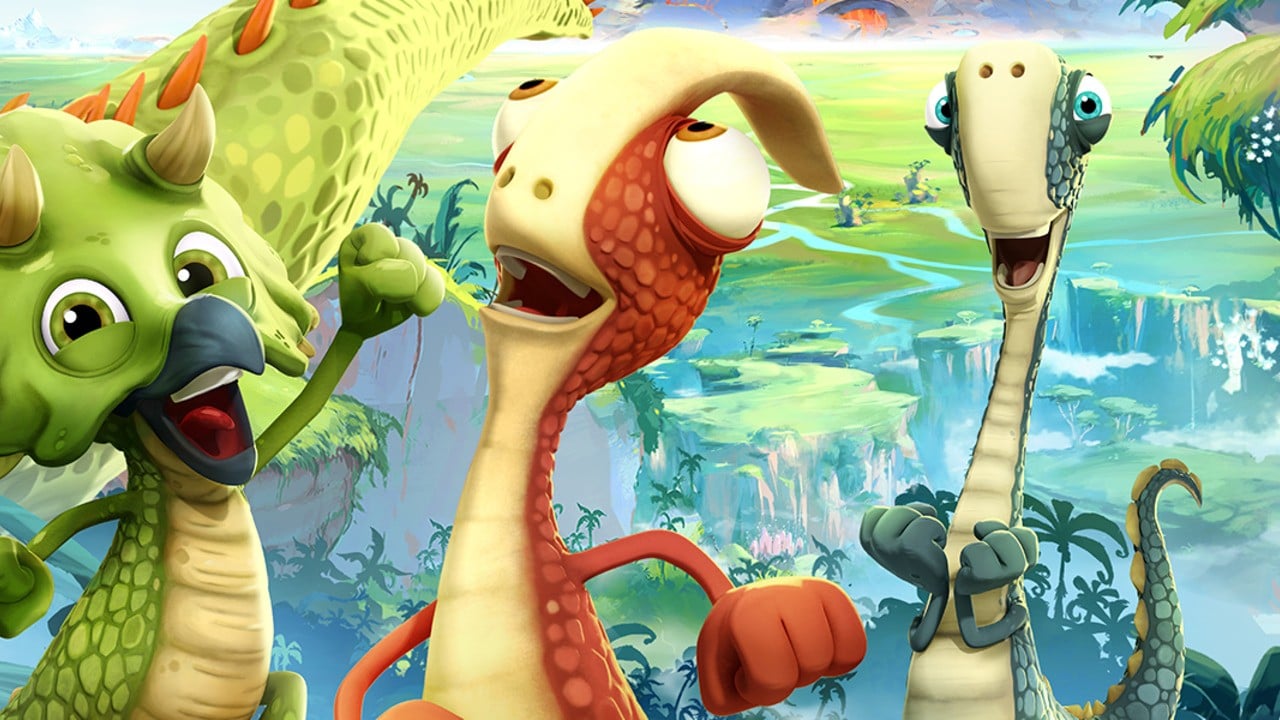 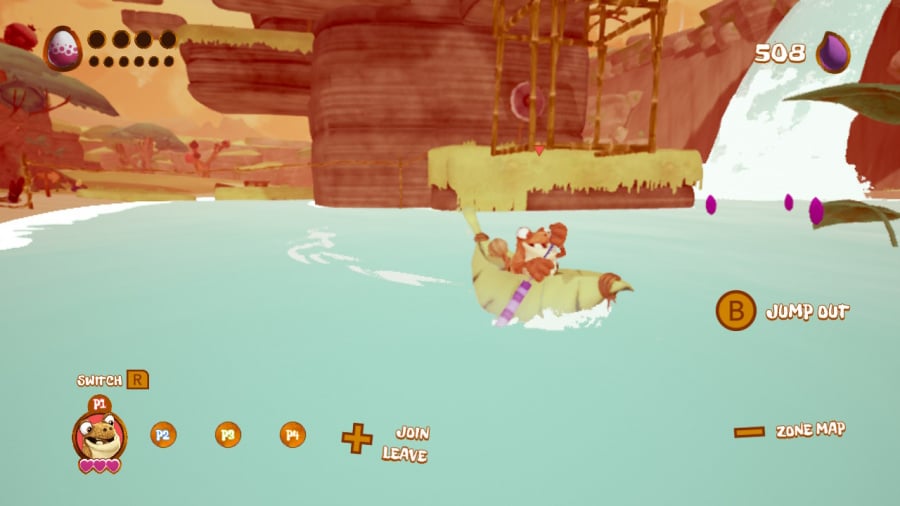 Licensed games continue to be incredibly hit and miss. There are certainly examples of titles that have got it right, such as South Park: The Stick of Truth and its sequel, but sadly there are countless other games that just simply feel like shameless cash grabs, relying solely on the popularity of the property over compelling gameplay. This is unfortunately the case with Gigantosaurus: The Game, a soulless husk of a platform game that takes many cues from Super Mario Odyssey, yet fails to implement them in any meaningful way.

It’s important to note right away that Gigantosaurus: The Game is fully intended for very young gamers: we’re talking age 6 and under. The way in which the narrative is delivered makes this fairly obvious from the start: cutscenes occur at regular intervals when completing a certain task or level, and the plot is told entirely through simple, rhyming narration. None of the characters themselves can actually talk, which is a shame in a way, but the simplicity of the plot’s delivery means that youngsters will at least be able to follow along without much trouble. 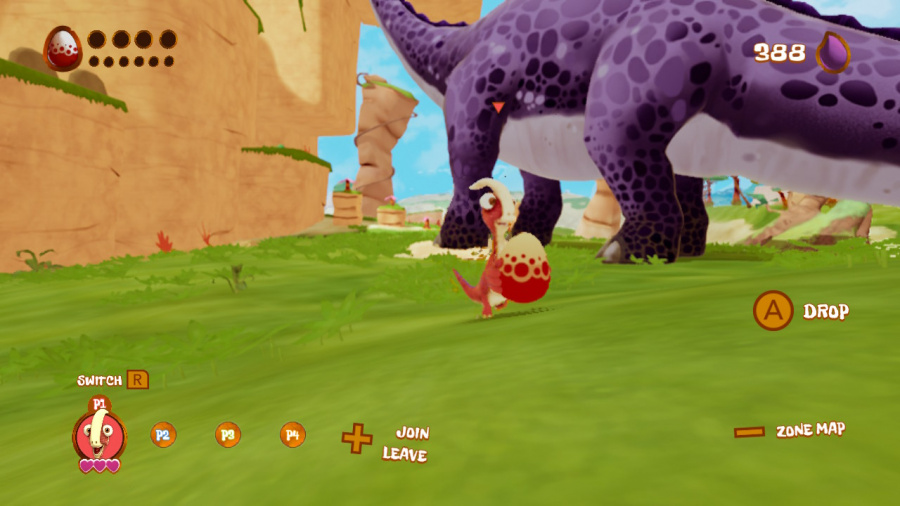 You play as one of four young dinosaurs: Tiny, Rocky, Mazu, and Bill. You can switch between the four on the go, or grab up to three friends and play cooperatively. The game is split into several levels of decent size, and your main priority in each level is to collect dinosaur eggs scattered throughout the environment and bring them back to their individual nests. There are a few optional side quests in addition to this, but they all consist of collecting different items, and quite frankly the main story quest is monotonous enough as it is.

Each of the four playable dinosaurs is endowed with a special ability that will allow access to certain areas. So for example, Tiny is an adorable Triceratops, and can use her thick skull to smash into poles, granting you a handy makeshift bridge when they come crashing to the ground. Playing cooperatively with friends means you’ll need to communicate which player is required for the task at hand, but if you’re on your own, you’ll need to cycle through the dinosaurs until you reach the right one, which can be frustrating after the umpteenth time.

There’s absolutely no doubt that Gigantosaurus: The Game has taken inspiration from Super Mario Odyssey, in that the task of collecting the dinosaur eggs is incredibly similar to collecting moons. A good bit of exploration is required to find each of them, but given the game’s intended audience, the difficulty is more or less non-existent. In fact, it’s not until the fourth level that you’ll actually come across any creatures that can physically harm you – at least, from our experience. We could put this down to the game catering to its intended audience, but heck, games when we were young were tough as nails. However, to give credit where it’s due, the level design itself is impressive, and some of the platforming required is great fun, with sections that include moving platforms on conveyor belts, and tornadoes that pull you into the sky. 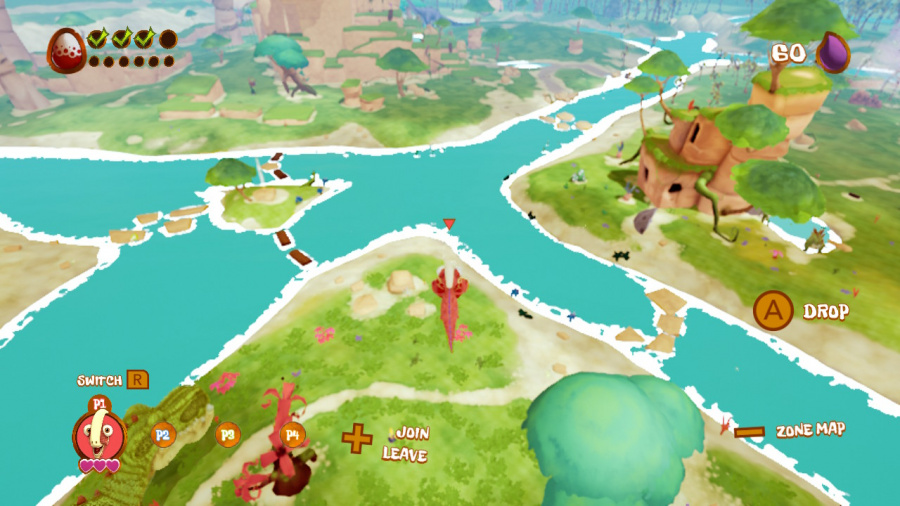 Surprisingly, Gigantosaurus: The Game is actually two genres in one. We’ve covered the platforming side, but in between each level, the game becomes a kart racer – not a very comprehensive one, mind. It’s actually a decent way to break up the repetitive nature of the main game, as you’re required to take part in races in order to travel from one location to the next. Again, you can choose from one of the four main characters, but we couldn’t detect any discernible difference between any of them in terms of speed or handling.

You’ll race along the tracks, collecting boosts and various other collectibles along the way, but sadly there aren’t any weapons available. It’s almost insultingly easy to win, but again, we need to keep reminding ourselves that it’s for young kids. Nevertheless, the controls are fairly decent here, even if they lack staple karting mechanics such as drifting. You can also choose just to race right from the main menu if you want a bit of a break from the main game, which is a nice little touch.

In terms of its general performance, Gigantosaurus: The Game is about as smooth as a spinosaurus’s backside. The frame rate is constantly sketchy and really starts to struggle when the screen gets busy. Additionally, we’re all used to game assets fading away when the camera gets in too close, but in this case objects like huge trees and rocks disappear immediately when you walk up to them, so you’ll find yourself frequently walking into invisible objects – given the rather basic nature of the graphics (we’re talking GameCube/Wii quality at best), this is simply inexcusable, and makes for an infuriating gameplay experience.

We cannot wholeheartedly recommend Gigantosaurus: The Game to anyone. Young children who love the animated show may well get some limited enjoyment out of it, but with poor graphics, a total lack of any discernible challenge, and shocking technical issues, it’s yet another licensed title that feels like it was designed as a quick cash grab. Games like this need to become extinct, and fast.

Random: Get A Glimpse At The Glory Days With This Retro SNES Video
“Power On: The Story of Xbox” Wins a Daytime Emmy Award
The Nintendo Switch’s firmware has received a “rebootless” update
Universal Sets L.A. & NY Runs For Steven Spielberg’s ‘The Fabelmans’ – Update
Roller Champions New Season: Disco Fever Out Now