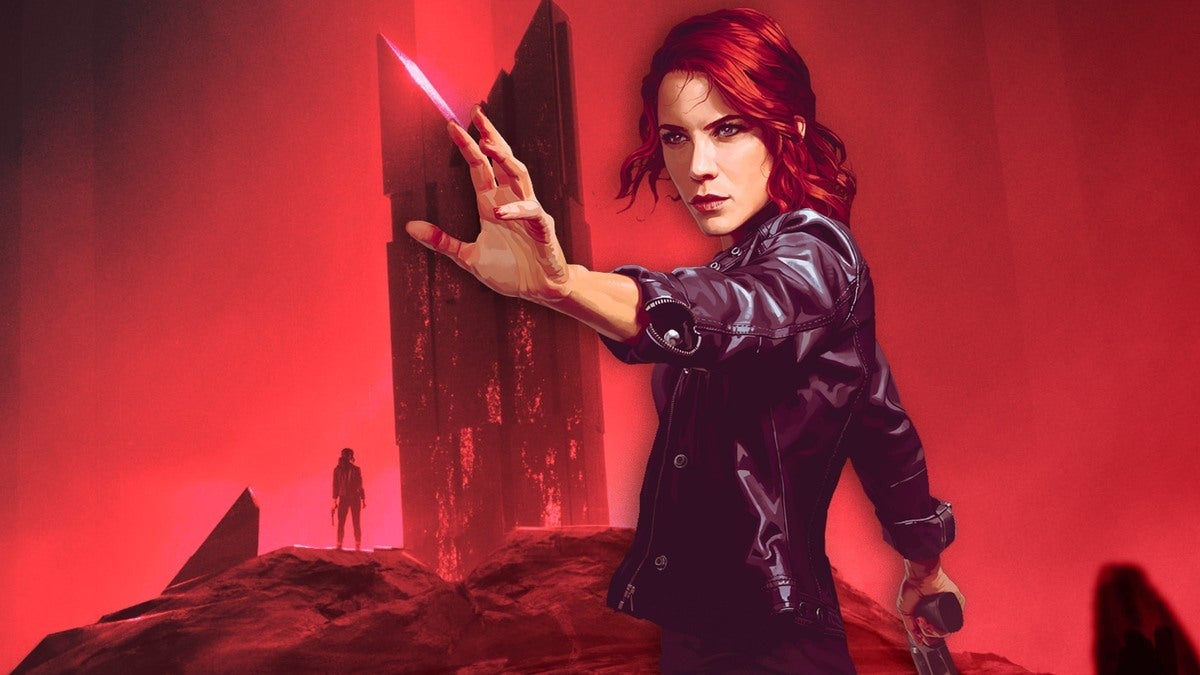 The Foundation, does just that yet again. It excels at being as weird and wonderful as the base game, but it’s certainly more of what I loved rather than something totally new. Not that that’s a bad thing.The Foundation’s story sticks wonderfully true to Control’s ending, which is great because it’s available instantly upon completing the campaign. Jesse Faden is now acting head of the Bureau… and life goes on. She has a job to do and more problems to tackle, but of course these problems just happen to be of the extradimensional variety. Despite quelling the Hiss’ spread at large, the very foundation of the Oldest House is at stake, and Jesse’s new adventure mostly trades in the stark workplace minimalism for a cavernous underground tunnel system that is no less ominous.

The grays and… other shades of gray of the Bureau are replaced by bright-beige rock walls and mounds of red sand pulled straight out of Star Wars: The Last Jedi’s Crait. Even if there’s only so much you can do with the limited color palette, the Foundation’s aesthetic never wears out its welcome or becomes so same-y enough that it gets confusing to navigate. And developer Remedy finds plenty of reason to incorporate both the Bureau and the Astral Plane in surprising ways I won’t spoil. But their inclusion feels earned and only deepens the connection of this new location to the world I’d already grown to love.

And it all looks stunning, especially running on a high-end PC that allowed the ominous, ray-traced lighting of Control’s world to truly shine. The Foundation’s more organic setting allows Remedy to play around with scope, producing some pretty impressive, imposing abysses. I looked into a handful of depths of total black or skylights of brilliant white and often wondered just how big this location might be.

Thankfully, The Foundation retains Control’s penchant for superb writing and fascinating world-building, even if its cast of characters isn’t quite as large. Again and again, The Foundation pulled off the neat trick of answering questions I didn’t even know I had, but that only served to make me love this world even more. Who knew the mystery of who created the Bureau’s power cores could be so interesting? Remedy did, and its consistent insights into the Oldest House proved to be just as gratifying.

The Foundation offers interesting answers to questions I didn’t even think to ask.

The Foundation’s four to five-hour story also challenges some of the storytelling norms I accepted in Control’s main campaign. Jesse and the Board are now at odds with one another, complicating the relationship of Board and Director by showing a more vulnerable side of the Board. The ominous, monolithic figurehead is more fragile, both literally and emotionally, in The Foundation than I’d ever imagined. Seeing how Jesse responds to that is frequently a treat; she’s both more confident after everything she’s gone through, but also more at home in this world than ever, which is a significant about-face from her initial mistrust of it.

Alongside The Foundation, Remedy is releasing a free update patch for all players, regardless of whether they buy the DLC. Control’s aesthetically cool but mechanically annoying map has been given some much-needed improvements in readability, the welcome option to reallocate Jesse’s ability points has been added, and a brand-new ability called Shield Rush that takes the momentum of the defensive Shield move and turns it into a full-force attack on a nearby enemy. Shield became a heavily used ability for me in the late game, so I’m glad to see it get a bit more of an offensive use without making the ability too overpowered. Not that it needed much more help, but I think after my time with The Foundation, Control’s moveset has solidified itself as my favorite, and coolest, group of powers Remedy has produced for a game so far.

At the heart of Jesse’s objective is tackling four challenges to help root out the Hiss from the Foundation. Those challenges often feature combat gauntlets replete with a new type of Hiss that’s invaded the Oldest House. Wielding axes they can toss and use for close-ranged combat, these Hiss are a worthy addition to the limited enemy lineup of the base game. They share some behaviors in common with Control’s aerial enemies, which forced me to keep Jesse nimble and frequently moving and/or in mobile shield cover to have a hope of surviving.

A pair of new abilities reflects her new level of experience, and the order in which you get them is your choice. The real demonstrable change that choice makes is which of the objectives you tackle first, but either way you’ll be taking them all on. One power lets you destroy crystals growing in the environment blocking your path, while the other lets you grow these same crystals in other locations to create platforms or, better yet, impale the Hiss to dust.

I definitely leaned toward using the latter because of its dual purposes, as the real benefit to breaking crystals comes down to picking up a few extra gun and personal mods hidden around the environment and I never felt like it was being stingy with those anyway. Taken together, though, these crystal powers offer a nice bit of variety to making your way through the large-scale environments, and Remedy even finds a nice way of tying in the impact of Jesse getting the second ability into her relationship with the Board. Nearly everything felt like it mattered in the world of Control, and that continues to be true with the DLC.

Similarly, The Foundation’s best and worst bits often echo what worked and what didn’t in the original Control. A deeper understanding of the Bureau, and this new location, comes from locating all the hidden collectibles filled with eclectic, funny writing. And the optional Altered Item encounters are once again some of the most unexpected delights around, offering unique twists on boss fights and combat arenas in ways that make me wish there were another dozen to tackle. Meanwhile, occasional slowdown still occurs when the action gets too heated and enemies are filling the screen, but on a high-end PC those moments were rare.

Alien: Isolation Developer’s Sci-Fi FPS is Called Hyenas, Coming to PS5 and PS4
Legacies: Six Reasons the Spinoff Failed To Reach the Success of Its Predecessors
Pop Fiction: Season 4: Episode 39: Sonic 3: Michael Jackson
REVIEW: SPIDERHEAD abandons Saunders’ depth for a shallow tale that descends into madness
The next Stardew Valley update is made for modders