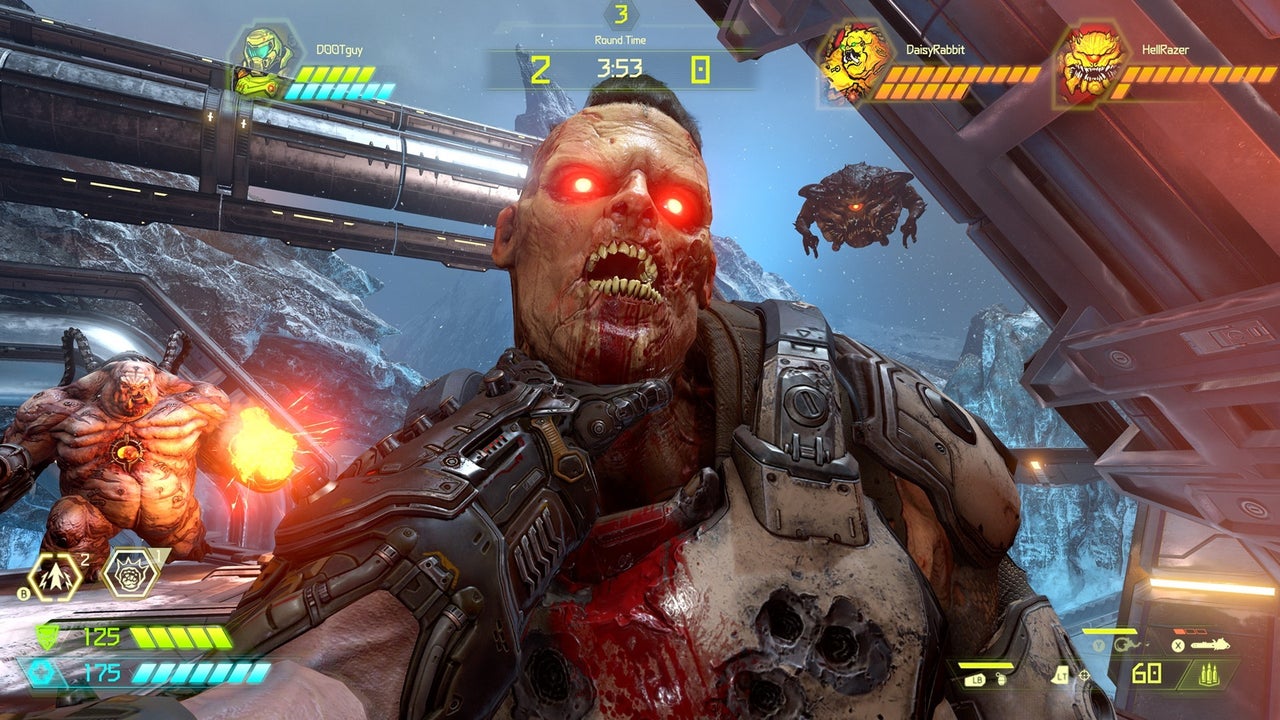 Making multiplayer work well in a game designed to make you feel like the godlike combination of an unstoppable force and an immovable object can’t be easy, but Battlemode, like the single-player campaign, is very good at empowering players as well as requiring time to master. A maxed-out, fully armed Slayer takes on a pair of player-controlled Demons in a best-of-five match – any combination of the Mancubus, Revenant, Pain Elemental, Marauder, and Archvile – and both Demons must be taken out before the other can respawn in order for the Slayer to win a round.

Also in the field are the AI-powered lower-level monsters the two Demon players can summon in various ways, which can really help you slow down the Slayer so you can go in for the kill. However, it’s a risk too because they also provide him with health, ammo, and armor when he mows them down.The fight rages across a handful of maps that’re repurposed from the campaign. None particularly stand out, though they all work pretty well for Battlemode in terms of their size and flow. For me, I quickly learned that I’m best as a Demon, and it’s also where I have the most fun. The monsters, by and large, feel cool to play as – particularly the Archvile, who is both tall and has giant claws for hands, and the Marauder, who is a menace in the campaign and packs a double-fisted axe/Super Shotgun weapon combo here. Which combination of Demons you and your teammate use seems as important as the skills of the humans themselves.

The monsters, by and large, feel cool to play as.

I’ve played as every Demon, and while the Mancubus was my initial favorite, I’m now a Marauder man. His throwable axe can annoy the Slayer at long range, while the double-barreled shotgun in his other hand can deliver a lot more pain up close. In concert with a good partner – say, an Archvile who can throw down an area-of-effect lake of fire – victory was well within reach. But I also had good rounds with the Revenant and its rockets and the Pain Elemental who spits Lost Souls.

Time-to-kill is extremely high for all three human players – particularly the Slayer – while it’s at its much lower campaign level for the AI minions. While some Slayers thrive on the challenge of being outnumbered (though certainly not outgunned), I enjoyed coordinating with a teammate in making the Slayer’s life a living Hell despite encountering almost no one with a microphone – mostly in unspoken contextual ways like avoiding the Slayer when my partner died in order to give him time to resurrect.

Knowing when to stick together, when to split up, when to hang back and summon as many minions as possible is key to defeating the Doomguy. So is the ability to block him from picking up items; knowing exactly when to use it can turn the tide of the battle.

Mid-round buffs, meanwhile, allow all three contestants to make changes like more health, greater minion damage, etc. Strategies evolve quickly on both sides. I once had a Slayer run straight for me and take me out within seven seconds of the start of the round, so I knew I had to stick close to my Demon partner and be more defensive out of the gate.

And in what is probably the best indicator that Battlemode’s 2v1 balancing act works, I’ve seen the victories split about 50-50 between the Demons and the Slayer.

A Stardew Valley update is in the works but don’t expect it to be huge
Paul Walker’s Daughter Meadow Walker Talks About Getting Abortion During COVID
The Big D: TBS Dating Competition Series Cancelled Ahead of July Premiere Date
The Terminal List Review: Chris Pratt’s Military ‘Thriller’ Is Terminally Bad
Guess Who This Smarty Pants Turned Into!